F1 On SPEED!: Australia 2010! After the snorefest that was Bahrain two weeks ago, the F1 Carnival heads to Australia this week.  On the whole, the semi-street circuit at Albert Park in Melbourne brings us an entertaining race every year, so we can only hope that this year is more of the same.  Let's take a look at the track map: 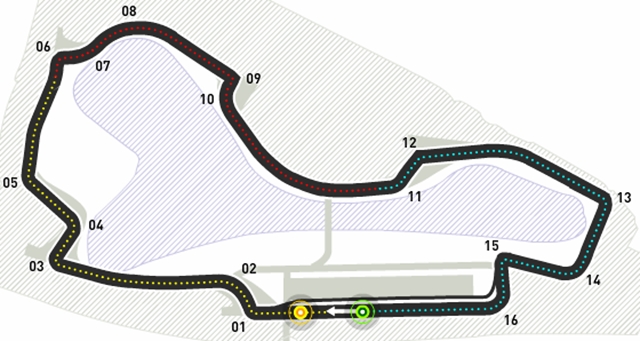 The Australian track runs around a man-made lake in a large city park.  For those of us in the US, imagine a racetrack in New York City's Central Park, and you've got the basic idea.  It uses tarmac built specifically to be part of the circuit, parking lots and public roads to create the layout.  Because of this, there are a ton of slippery spots all the way around the track due to the painted lane stripes.  These stripes are what gives it the nickname "God's Slot Car Track."  Due to a resurfacing in 1996, it's pretty smooth and thus easy on tires, though some braking zones have some surprise ripples.  It's not particularly hard on brakes.  The track is wide and forgiving for the most part.  Basically, it's an easy circuit to drive.  But, like most street circuits, there's armco barriers all the way around and very little runoff area where there isn't armco.  You get off-track here, and you've usually broken your car.

The other interesting feature of the race is the start time, 5pm local.  The sun will be in the drivers' eyes all day as they come down the main straight and the run from Turn 2 to Turn 3, getting lower all the while.  That's just gotta be annoying.

Well, the good folks at SPEED will do their darnedest to bring us their usual stellar coverage.  Friday's second practice session comes to us live from 1230am to 210am on Friday morning.  The Quals are Saturday morning from 1am to 230am, more-or-less live.  The Grand Prix of Australia itself is Sunday morning from 1230am to 3am, and there are no replays scheduled that I can find... so either stay up late, record it, or miss it altogether!  All times are Central Pond Time; subtract two hours for San Francisco, add one for Cleveland.

Looking at it on Google Maps, it looks like turn 5 is the only one where there's no real runoff area if you miss. All the other turns have pavement or grass for runoff. Maybe it's not kitty-litter but it isn't a wall, either.

Turn 15 is the second worst, I guess. And maybe turn 2, but no one's going to lose it there.

This was one race I was counting on a replay.  Since I'm more of an early riser than a night owl, I figure I'm going to miss at least part of it.  Which sucks since it's one of my favorite tracks.