F1 On NBCSN: Singapore 2013 Once upon a time, not that long ago, Singapore was an eagerly awaited destination for the F1 Circus.  Imagine, the first ever Formula 1 race at night, under a multi-gazillion-watt lighting system that would make the cars look frickin' sweet!  And they'd race over bridges, and under the seating area, and past the historic Raffles Hotel, and the course layout looked great, and all that jazz.  Except, as we've learned, looks can be deceiving.  It's not that great a track, the night racing is a gimmick (but it does look nice), you can't tell when they're on the bridges, yadda yadda yadda.  There has been a change this year though... let's take a look at the track map for the 2013 Grand Prix of Singapore! 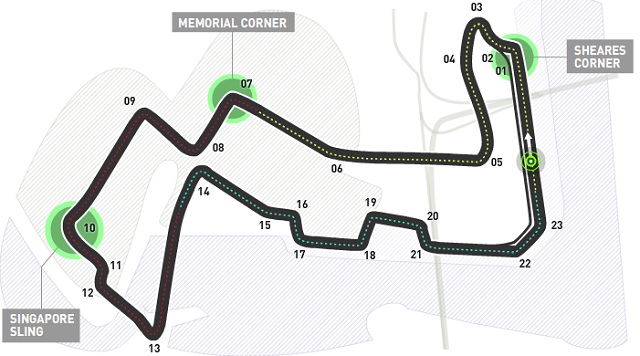 It was notorious as "the worst corner in Formula 1."  Turn 10, aka "The Singapore Sling," used to be a quick left-right-left mini-chicane with high curbs that would launch unsuspecting cars into low-earth-orbit if you got too much of them.  Nobody liked it, except for those amongst us who also enjoy watching NASCAR for "the Big One."  Please note, this does include your humble scribe to a certain extent, and seeing a multi-million dollar F1 car catch air like a F-18 Super Hornet launched off the deck of an aircraft carrier was one of my guilty pleasures.

Well, no more.  The FIA did away with The Launching Pad, and instead put a fast left-hand sweeper in it's place.  Borrrrrrrrrinnnnnng.  Safe, but boring.  I exaggerate, but only for effect.  Still, at least the turn had some cachet to it.  Negative cachet, sure, but it was there.

So this is where we're treated to this weekend.  I'd like to say that NBCSN is going to be all over it, but I can't seem to find any coverage of Quals until Midnight Sunday morning, so maybe not.  Here's what I DO know:
FRIDAY:
Practice 2: 830a - 10a live
SUNDAY:
Grand Prix of Singapore: 630a - 9a live

We should be F1U!'g all over the place, so keep an eye out and we'll see ya then!