F1 on NBCSN: Malaysia With a cloud of embarrassment hanging over its head, F1 bids adieu to Australia and made its way to the next destination on the World Tour: Malaysia, and the Sepang International Circuit contained therein.  Let's take a look at said circuit's track map: 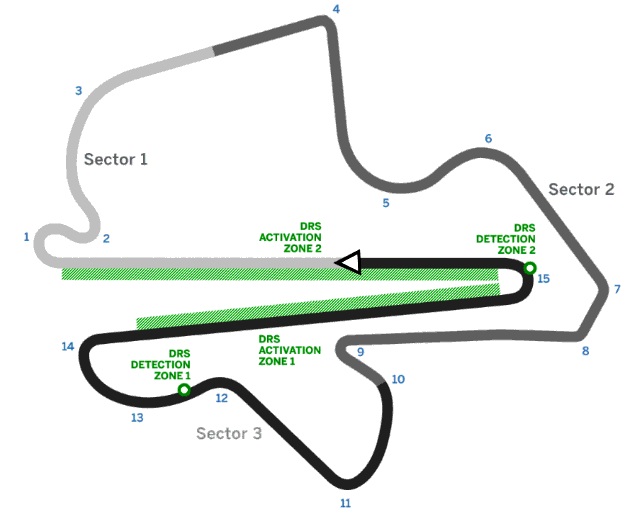 Some things never change.  Since 1999, Malaysia has been dominated by the two "forever straights", separated only by a tight, low-speed hairpin.  In effect this was Hermann Tilke's premiere track design, though he did technically design the A1-Ring (now the Red Bull Ring) in Austria first.  It's already full of what would be come his signature tics, like the aforementioned long straights, lots of rhythm-destroying turns, and an appalling lack of feel for a racetrack.  All of these would carry over to his later designs, with only Turkey truly standing as an acceptable layout.

Well, what's done is done.  The circuits are here, they aren't going away anytime soon, so this is what we've got.  What do often do get in Malaysia is rain.  Lots and lots of rain.  If we're lucky, we'll get rain this weekend.  According to the forecast, there's showers scheduled on race morning, with thunderstorms in the afternoon.  The question, of course, is if "the afternoon" is during the race itself.  We'll see.

In injured driver news, both Valterri Bottas (back) and HWMNBN (concussion) are hopeful for returns this weekend.  The Finn will do the car self-extraction test on Thursday, and if he's capable of that, he'll be driving.  The Spaniard, however, went through a battery of tests this weekend, and will undergo a final medical assessment from the FIA on Thursday as well.  I'd expect to see them both racing on Sunday.

Finally, here's the TV schedule for NBCSN's coverage this weekend:

As always, times are in Pond Central.  Also as always, NBCSN's scheduling is brought to us by Zap2It, which means it's frequently wrong, and constantly impossible to read.

Yes, please, very much so.

1 In addition to Turkey, I would consider COTA to be a good Hermann Tilke track.  They show that he is capable of creating good tracks, he just usually doesn't.

To be fair, many of the track locations are chosen for political reasons, not because they're good sites for a race track.  Dead flat plains don't do a track architect any favors, and I doubt anyone could have made a great track out of the Sochi Olympic Park.  I read somewhere that Tilke was involved in site selection for COTA, which explains why the track seems to work with the terrain, especially the turn 1 hill followed by the downhill esses.

2 I would consider COTA to be a good Hermann Tilke track.

If he had been the designer, I'd agree.  Tavo Hellmund is credited as the designer of COTA along with Kevin Schwantz.  Tilke was an advisor.

He should advise more often.

7 Every last detail of the comments process is now being logged; if Steven or Brickmuppet still have problems I'll at least know why.

11 That wasn't Brickmuppet either.

14 Back on topic; Can you please opine on what makes a good racetrack?

15 Muppet, good to finally see you back in the comments again!  Hope finals went well?

"Can you please opine on what makes a good racetrack?"

16 I was just looking at this track in Google Earth, and whatever else you may say about it, good or bad, it looks like a safe track. All the turns except #2 have big runoff areas, and #2 doesn't need one because no one will be going fast around it. There's a big grass area there in case someone goes off the track, and that's enough. I didn't see any significant fences or light poles to run into, either; everything is nice and clear all around the track, except on the two big straights -- and that's OK, too.