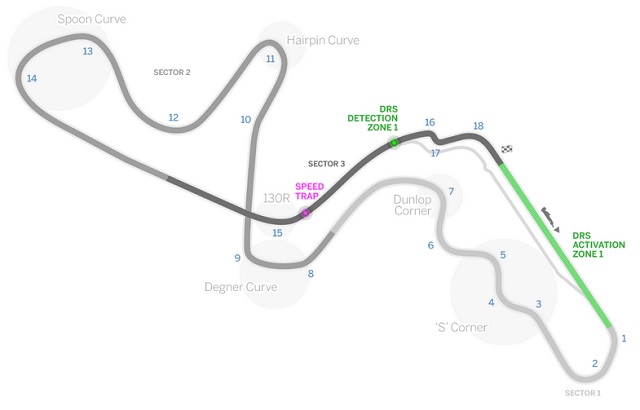 Nope, no messing around here.  What on some circuits might ruin the flow, instead causes it at Suzuka.  The "S-Curves" are maybe the greatest rhythm section since Neil Peart and Geddy Lee.  You've got Spoon Curve, which has an amazing habit of eating cars and not spitting them back out.  130R is... well, it's fast is what it is, and all of that leads into the Casio Triangle (where old calculators go to die).  It's a lovely mix of fast and slow that rewards both might and nimbleness in nearly equal amounts.  And, hey, it's a Figure-Eight, too!

Weather at the moment looks rainy for Friday's Practice sessions, but dry the rest of the way.  However, there is a typhoon in the area, so who really knows?  Hopefully it won't be too wet... we don't need that after last year.  What we DO need is the Legendary Announce Team, and they'll be bringin' us the goods followin' the followin' schedule:
Thursday
Practice 2: 1159pm - 130am live
Friday
Quals: 1am - 230am live
Saturday
2015 Grand Prix of Japan: 1130pm - 2am live

As is usually the case, I'll be along eventually with a F1U! for you... assuming my interwebz allow me to do so.  See ya then, then!

3 Suzuka is such a beautiful track. I really can't understand why F1 preferred Fuji for a lot of years. (Probably financial...)

4 Uncle Ad, I wish I had thought of that.

5 I just noticed something: what is the "speed trap"?

6 It's where the top speed measurements are taken, Steven.  Allegedly the fastest spot on the circuit.

7 So there's no penalty for being fast, or anything like that?

8 None whatsoever.  It's not like a highway speed trap... though having the FIA Police trying to pull over speeding F1 cars on-track would be amusing.