F1 On NBCSN: China 2013! Well.  It has been a while, hasn't it?  I would think that, in this day and age, you could get from Koala Lumper to Shanghai in faster than two weeks and change, but sometimes the fastest seasonal sport on the planet can be awfully slow.  Well, that's all behind us now, because we've got a race this weekend!  And not just any race, oh no.  It's the Grand Prix of China!  Let's take a look at the track map: 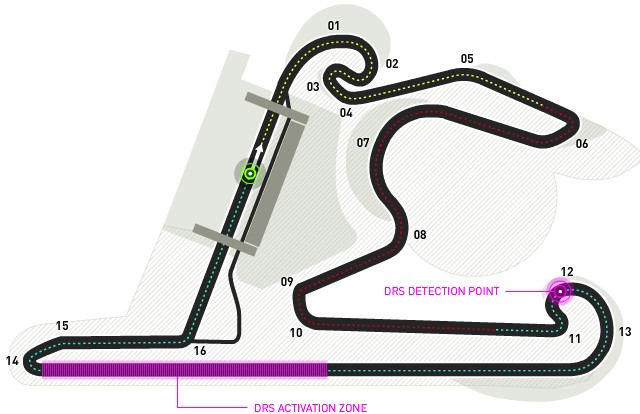 Yeah, the Tilkenator is at it again.  From Turn 1 to Turn 10, there's almost no point in trying to pass anybody, because he made it damn near impossible by throwing turns willy-nilly.  This is one of the very few circuits on the calendar where you have to worry about smog.  The engines don't run as well in it, there's a metric farkton of dust around the place due to the surrounding factories, and on and on.  It's one of the few places where rain probably improves the way the cars behave.

The F1 world has been rather quiet during the past few weeks.  Nobody's been crying too loudly about the tires, the Red Bull orders thingy has been swept under the rug, and there's almost been more discussion about the upcoming Grand Prix of Bahrain than about this one.  Well, that's fine, too.  I'd rather we pay attention to the racing than the politics of the sport, though it does put some extra pressure on the Legendary Announce Team.  I have faith in them, I do I do.  Here's the schedule:
FRIDAY
1am - 230a : Practice 2 live
SATURDAY
1a - 230a : Quals live
SUNDAY
130a - 430a : 2013 Grand Prix of China live, plus F1 Extra.
Because NBCSN's schedule website is so awful, please take all these times with a grain of salt, and please please please check your local listings.

Now that we've got that out of the way, we've FINALLY gotten a trailer for the upcoming F1 movie "RUSH".  Let's take a look, shall we?

Ron Howard, please take all my money.  Yes, this is real, and it is spectacular.  It's also due September, 2013.  Based on the real story of Niki Lauda and James Hunt and the 1976 season.

1 Any sightings of Tooned this year?  I rather liked that little series.

2 The new season is supposed to debut at Spain, the 4th race of the season.

3 Or the FIFTH race, if you count Bahrain.  *sigh*