F1 on NBCSN: Australia 2015 Like a big, hungry, pissed-off grizzly bear dragging itself out of its hibernation cave, the growls of Formula 1 have begun to emanate from the south-eastern tip of Australia.  Melbourne is the location, the Albert Park circuit the destination for the ten teams contesting the 2015 Formula 1 season.  Let's take a look at the track map for this historic circuit: 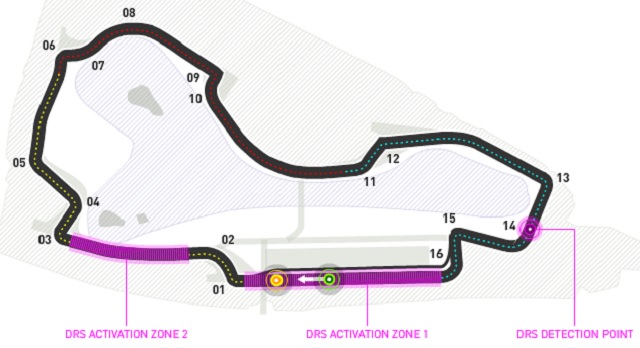 Just as the Cincinnati Reds used to open the baseball season with the first game of the year, so too does Australia have primacy of place on the F1 calendar, and the few times that hasn't been the case have felt weird.  I've often said that the Albert Park circuit is the perfect starting track for season, for it's pretty much *everything* you could want out of a track.  Tight, twisty sections that test the maneuverability of a car?  Yep, it's got it.  High-speed parts?  You betcha.  Heavy braking?  Oh yes.  Fast sweeping turns that strain the downforce levels?  Surely.  God's Slot Car Track will provide.  Plus it's a nice-looking location, to boot. 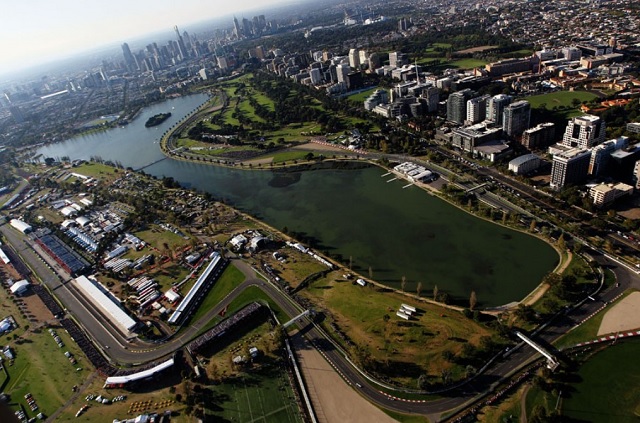 The only thing that prevents it from being the perfect circuit is a lack of elevation change.  It may not be billiard-table flat, but it's awfully close.  It's a tough layout for both driver and car.  It's considered a street circuit, as it runs along permanent roads through the park.  As such, it has many of the problems you'll find in places like Monaco... motor oil dripped into the surface, for example... but without any of the bumps and blemishes you'd expect from a street track, as the entire place was reprofiled and resurfaced to make it as smooth as any permanent layout, despite only being used one weekend a year.  Throw in the first time running the cars "in anger," and you get the potential for exciting weekends for some teams.

And despite all predictions, we'll have ten teams on the grid.  Marussia fought its way out of receivership and will show up in the pit lane despite no testing, running a heavily modified version of last year's chassis, with Ferrari supplying 2014 engines.  That can't be good as far as being a legit challenger goes, but at least the team is on the rid.  They're operating under the parent name "Manor Motorsports," which has always been the name on the racing entry, though Virgin and more recently Marussia has been the team name.  The equipment carriers still have the "Marussia" logo on them, as do the shirts of the team members receiving them, but my guess is that Manor will be the final name.

One driver that WON'T be on the grid for Australia is McLaren's HWMNBN.  During testing a few weeks ago, the Spanish driver was involved in a relatively simple accident, banging into a wall with the side of the car at around 80-90 mph.  While otherwise unharmed, he suffered a concussion with unconsciousness and some amnesia to boot.  He has not been cleared to return to driving activities yet, and the possibility of missing the next race in Malaysia as well can't be ignored.  Concussions are nothing to be sneered at, and caution should always be used concerning them.  There's been a lot of conspiracy theories floating about the accident, primary amongst them that he was shocked to unconsciousness by a malfuctioning ERS, but McLaren denies this.  Kevin Magnussen, one of McLaren's 2014 drivers and now their reserve, will be in the seat until HWMNBN is okay'd to race once again.

NBCSN will once again be providing coverage of the weekend with the Legendary Announce Team in full throat.  Since this is a special event, the first race of the year, it appears that we're getting expanded coverage, too!  They're showing up P1 and P3... take a look at the schedule, understanding that you'll want to double-check it on your end before you trust any of it.  Zap2It, which powers NBCSN's online schedule system, is slightly less ergonomic than your average steel I-beam.

All times are Central Pond Time.  Add one hour for Wyoming, Delaware.  Subtract an hour for Wamsutter, Wyoming.  Remember, all you residents of Coos Bay, Oregon, that you're two hours behind The Pond.

So there we are.  And there you are.  And here I am.  Someone will see you sometime.

1 "...despite no testing, running a heavily modified version of last year's chassis, with Ferrari supplying 2014 engines."
What could possibly go wrong?

2 Yeah, Melbourne is not the place to go for elevation change.

Sydney on the other hand...  I lived for years on a road that was split in two, with the eastern side a good ten feet lower than the west.  The road behind my house was closed most of the time I lived there because the cliff face had collapsed.

3 Wow, this one will actually be prime time for me!

4 I just took a look at the track in Google Earth, and it looks like a very safe track. Plenty of room for runoffs at any of the sharp corners, and no obvious deathtraps I could see.