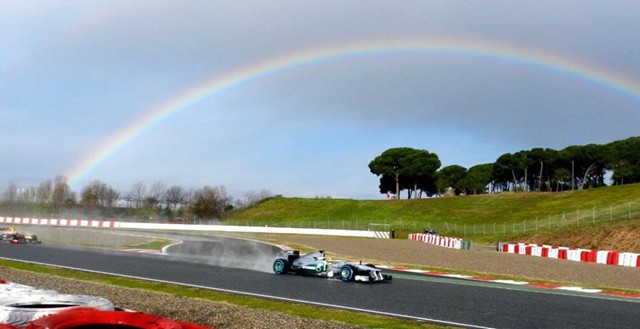 Everything is right with the world.

As is tradition, the new season is opening in the Land Down Under.  Beautiful Albert Park, Melbourne, will host the Australian Grand Prix for the 18th consecutive year, and to say that this should be a revealing race would be something of an understatement.  But first, let's take a look at the track map: 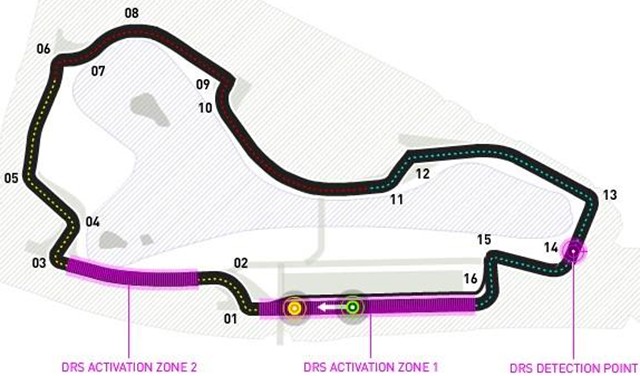 It's the same old circuit that it's been for as long as I've been watching F1, and that's a really good thing.  What we have here is probably the most balanced of tracks on the calendar, in that there's no "technical" section.  See, I just cringe when I see "technical" or "stadium" used as a descriptor for a part of a race circuit.  It's just a nice way of saying "slow and pointless".  For example, please look at the track map for Interlagos in Brazil.  Can YOU guess what the "technical" section is?  If you said "from Turn 7 to Turn 11," you're right!  It's just there to slow the track down as the cars go up and down and up and down.  Awful.

And Australia doesn't have any of that.  Oh, to be sure, you slow down, but it's never for more than a corner, maybe two tops, before you're back to racing.  It's organic.  It flows.  It's a challenging layout, but not so challenging to be a bad way to start a season... imagine if Monaco was the first race of the year!  HRT would have won every season simply because they couldn't go fast enough to hurt themselves if they bumped into the walls... but I digress.  On the whole, drivers uniformly love the track.  The single most unique part of the track is that it's very much a street circuit at heart.  Almost the entire map can be driven by the public year-round; Albert Park is a working public park, after all.  There's even one bit that cuts through a parking lot!  As the tarmac is really road, that means there's all sorts of oil, transmission fluid, radiator drippings and crud that falls out of working engines over daily use embedded in the asphalt.  Throw in the lines painted to signal lanes and the like and you've got what can be a very slippery surface, particularly if it rains... and guess what's in the forecast for Quals and Race Day?  Well, at least a chance of the wet stuff.  Personally, I don't want it to rain... I want to see these cars out on a dry track so we can get an idea of what's what!  Don't get me wrong, rain is fun!  Let's have it in Malaysia, next weekend.

But before we talk about the second race of the year, we need to see the first.  This year, for the first time in my adult life as a F1 fan, the races will not be covered by SPEED.  In fact, in a few months, SPEED itself will go away, turned into FOXSports1.  Y'know the saying "Meth: Not Even Once"?  Fox's version of the aphorism appears to be "SPEED: Not Anymore."  I've gone astray again.  NBCSN, new channel, new coverage... mostly the same old Legendary Announce Team!  Steve Matchett and David Hobbs, the mechanic and the driver, make the move over.  Leigh Diffey takes over for The Varsha, a role he's used to as he did the same at SPEED whenever Bob was doing car auction coverage.  And, if you trust the tweets, The Varsha may be rejoining the Legendary Announce Team later in the season.  Will Buxton's Exuberance  remains the pit lane guy.  But when do we get to experience this new group?  Let's take a look:

That's right, we get Practice 1 on television now!  P3 is probably streaming, but I can't confirm that.

Before we go, I think it'll behoove us to take a look at the driver lineup for 2013... the last time we talked about it, not every seat had been filled, after all.  Here we go:

Red Bull: Seb Vettel, Mark Webber.  Really, why mess with a good thing?
Ferrari: HWMNBN, Felipe Massa.  If he beats Vettel for the championship, even I'll put in a good word for The Evil One.  If Massa beats Vettel for the championship, I can only assume the world is about to come to an end.
McLaren: Jenson Button, Sergio Perez.  So weird to see this team without Shiv Hamilton.
Lotus: Kimi Raikkonen, Lettuce Grosjean.  Kimi knows what he's doing.  The same may not be able to be claimed for Lettuce.
Mercedes: Nico Rosberg, Shiv Hamilton.  We've seen the last of Hamilton on the top step for a while.
Sauber: Nico Hulkenberg, Esteban Gutierrez.  With Gutierrez and Perez, we have two Mexican drivers in F1.  No Americans, though.
Force India: Paul di Resta, Adrian F'n Sutil.  Sutil's back!
Williams: Papabile Maldonado, Vallteri Bottas.  Bottas has no lips.
Toro Rosso: Jules Vergne, Daniel Ricciardo.  One is French, the other bland.
Caterham:  Charles ToothPic, Geido van der Garde.  I'm gonna have to come up with a nickname for Geido in a hurry.
Marussia: Jules Bianchi, Max Chilton.  Sponsorship! 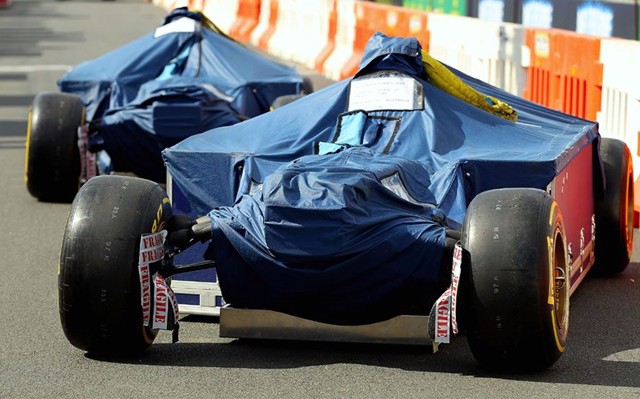 1 Speaking of Americans in F1, Scott Speed is in Sprint Cup this season and he's doing much, much worse than Montoya, who is not fighting for top-10 himself.

3 Mauser, DRS is the "Drag Reduction System," aka "the moving rear wing."  It's only eligible to be used in the purple bits, and only if you're within a second of the car in front of you at the DRS Detection Zone.

4 Why the limit on where it can be used?

5 DRS is implemented as a movable flap in the rear wing.  You change the angle of that flap, and you give up a significant chunk of your rear downforce, but since you're no longer diverting that chunk of airflow, you get a lot less drag as a result.  But you wanted that downforce for a reason, it makes the car turn a lot better.  And of course any movable aero bits had long been banned, as the result of a joint or pivot sticking or bits falling off mid-corner is kind of nasty.  So, the DRS zone is always on a long straight, for safety reasons, as you don't need the downforce there, and if it fails on you there, you're not going to instantly spin off the track.  On a course with multiple long straights, they often allows DRS usage in two places.  There is also a bit of "lets put an artificial limit on this so the teams must think, and it becomes 'interesting'".

6 Will the F1 Update! crew be making any predictions for this season?  If I had to take a guess, my head says it'll be another toss-up between Alonso and Vettel for the Driver's Championship; but my heart will be cheering for Mark Webber, even though his chances look pretty slim.

7 It's pretty hard to do that before we see any of the cars race. In a couple of weeks it'll be slightly more straightforward.

8 Peter TNSG, for the most part I'm in agreement with Steven.  While I have seen some small amount of off-season testing coverage, none of it was enough to give any idea which teams were going to be any good beyond "Ferrari, McLaren, Red Bull, Lotus, Williams and perhaps Sauber."  Please note, that's more than half the grid.

I will make a prediction however: I'm taking the field vs Seb Vettel.

9 Nice overview of the upcoming F1 season by The Telegraph. It's got a bit of snark too. I'm thinking that it'll be another 3way fight between Jensen, Seb (spit!) & HWMNBN (double spit!). I'll be looking hard to see if Williams can step up, if Force India break out of mid-pack & if what the heck Lotus & Caterham get for the money they spend.

10 I'm in Hawaii! And of course this is normally a good thing. But I'm in Hawaii for two F1 races at a house with no NBCSN! Nooooooo...

And I'm in Hawaii and lonely because my honey darlin', who makes it all worth it, is on an overnight field trip with her class...

On the other hand, it's an overnighter on the Big Mo, so it has to be okay by default. (I was not invited to join them. "Your snoring would keep them all awake!" Ah well.)

Also Kawaii-kon is this weekend, so that's a plus...