F1 on NBCSN: Abu Dhabi 2013 Keenly observant readers of The Pond may have noticed that there's been something of a F1 interest decline of late... and by "of late," I mean "most of the season."  I surely can't slip anything past these clever readers, you brilliant people you.  The never-ending domination of Red Bull and Vettel has sapped much of the joy out of the sport for me.  Which brings us to Abu Dhabi, the next race on the F1 calendar.  Let's take a look at the track map, shall we? 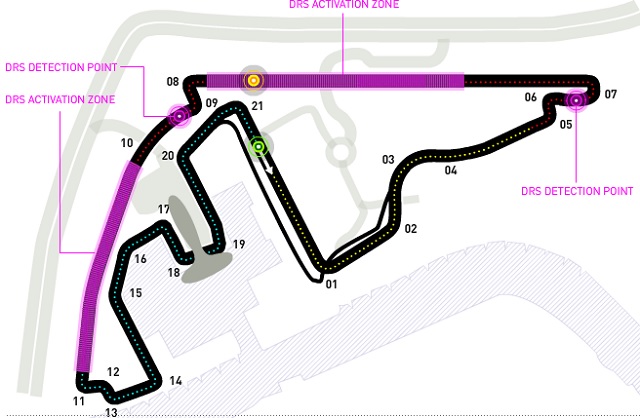 It shouldn't come as any surprise to hear that there's probably not been a race this year that I've been less interested in than this week's.  Both the Driver's and the Constructor's championships have been won.   Abu Dhabi may as well have been designed for Red Bull cars.  The race after this one is the US Grand Prix, which has the cachet of being... well, HERE.  The race after that is Brazil, the last one of the season.  But Abu Dhabi?  What does it have going for it?

Right, exactly.  Sure, there's plenty of drama left: will Mercedes or Ferrari end up as the second-best constructor?  Will Force India, with a 23 point lead over Sauber, end up choking away sixth place?  Will Raikkonen catch HWMNBN for 2nd place in the driver's championship, which would make for really interesting news going into next year, when they'll be teammates.  Drama indeed... but the Wonderduck that would have written thousands of words for the fight for 10th place in the driver's championship between Paul di Resta (40 points) and Nico Hulkenberg (39 points) isn't the Wonderduck sitting in front of the keyboard these days.

I miss that Wonderduck.

I'll be here... will you?  I wouldn't blame you if you weren't, given what I've just talked about, but I hope you show up.

1 Important news: The Akron Aeros baseball team have changed their name to the Akron RubberDucks.