F1 Japan 2012 Practice 1: Liveblogging! (Pre-Session)  And it's another attempt at liveblogging!  This time we find ourselves at Suzuka International Circuit for the first free practice session for the 2012 Grand Prix of Japan.  It all gets under way at 8pm Central Pond Time, and if you'd like to follow along with me, direct your browser to SPEED Streaming and refresh The Pond from time to time!  As in the past liveblogging sessions, the session is 90 minutes in length.  I'll be using the time remaining as the time notation:  if you see (1:02:30), that means 27.5 minutes have gone by in the session.  Read from (1:30:00).  Your mileage may vary.  Ask your doctor if Wonderduck's Pond is right for you.  Burma Shave.  And now we wait... 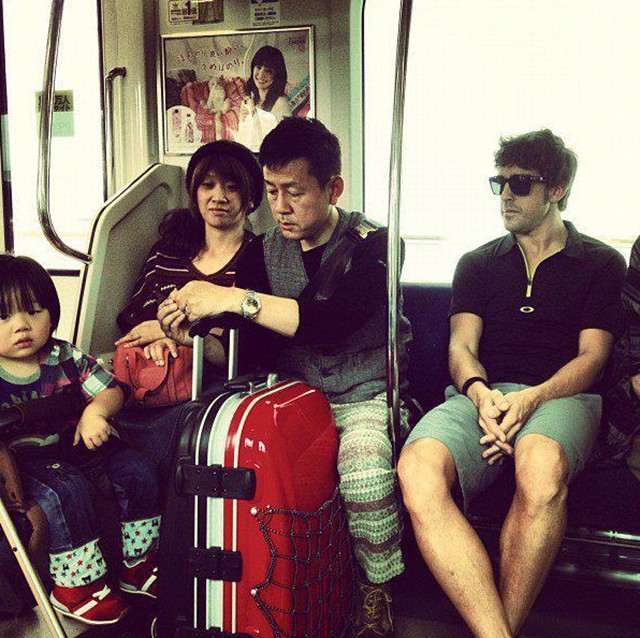 While HWMNBN terrorizes a Japanese family on a train, I suppose I should say something about the announcement that Slappy Schumacher has decided to retire (again) at the end of the season.  It's no great surprise, to be honest.  His comeback was singularly unsuccessful, to be honest.  One podium, no poles, no victories in three years... and his teammate consistently outperformed him.  That's not a good thing at all.  He's surely helped Mercedes get their team off the ground, but... *shrug*  He's still one of the best ever, and he should be remembered that way, but he probably shouldn't have come back.  Any bets on him winding up in DTM or LeMans?

(1:30:00)  And we're green!  First on the circuit is... exactly who you'd think it'd be in Japan, Gandalf Kobayashi!  Good news, FujiTV is not providing the world feed this year!  This means we won't be watching Gandalf the entire time, even if he's in 18th.

Further updates will be below the More...


(1:26:17)  We had a full raft of cars on track, then they all went back into the pits.  Not a one of 'em turned a timed lap.  That, my friends, is what's called an "installation lap," basically making sure that nothing broke on the way from Singapore.

(1:24:34) ...and no sooner did I type that than Kimi Raikkonen's Lotus was seen to be slow on the track and making grunting and farting noises like it couldn't find a gear if it was given directions.  Good timing.

(1:15:17)  Not much happening.  Lots of shots of the pits, Jules Vergne apparently didn't die going into Turn 1 as he's lapping right now... looks like he'll be the first one to set a timed lap! 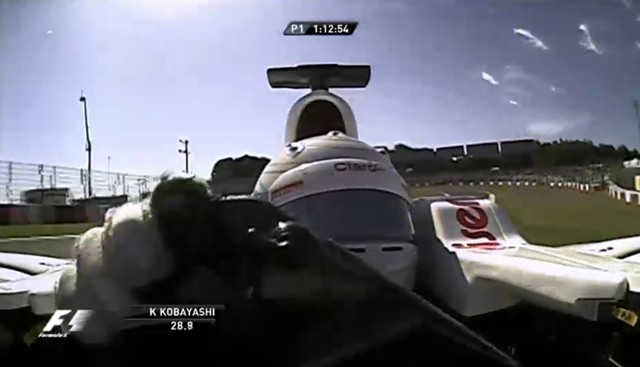 Actually, it was pretty cool.  Oh, the weather is GREAT at Suzuka, by the way.

(1:02:52)  The HRT is a great car, one of the fastest in motorsport.  Unfortunately, there are 22 better on the F1 grid.  Pete Rose just took one through the Casio Triangle, aka "the slowest spot on the circuit", and it was skidding around like it was in The Fast And The Furious: Suzuka Slide.  Just an awful, awful F1 car. 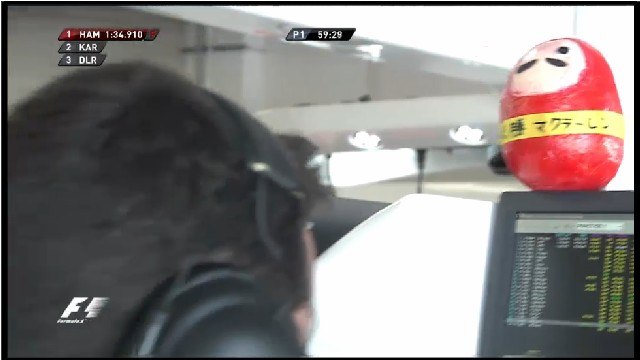 (56:41)  Ooh, perhaps ominous clouds building in the direction of the Casio Triangle... who knows what that'll do?

(51:50)  What in the...?  It looked like Mark Webber just... got lost going into the Triangle.  Oh, I know, he just missed his braking point, but the way he was fumbling around, trying to get the car going in a direction of his choosing, made it look like he was trying to make up his mind as to which way to go.  Funny stuff.

(41:20)  Here's one of those new camera positions I was mentioning: 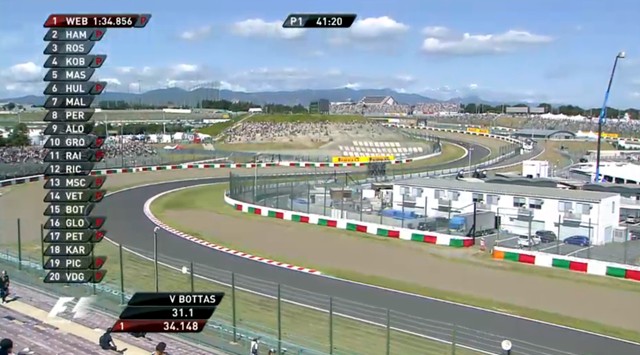 You can see the end of the S-Curves and a bit of the front straight (back right) and the leadup to Degner (just past the hill in mid-picture).   There's another angle where you can see the crossover, both top and bottom, and I think Turn 12, too.  Thank heaven for cranes.  Right at the start of the stream, we saw cars in all three places at once... awfully neat.

(35:39)  Lapping, lapping... but nothing happening, really.  Just enjoying the feed with only tracksound, no announcers.

(35:01)  Note to self: Jessica Michibata (aka Jenson's girlfriend) is awfully cute.

(24:50)  Things I did not expect to say during this session #1: "the action is really heating up on track."  Lots of nose-to-tail running there for a minute or so.  Stop it you guys, are you drunk?  This is P1!

No, Kimi was not one of them.

(19:11)  Note to self: you get better traction when all your wheels are on the ground. 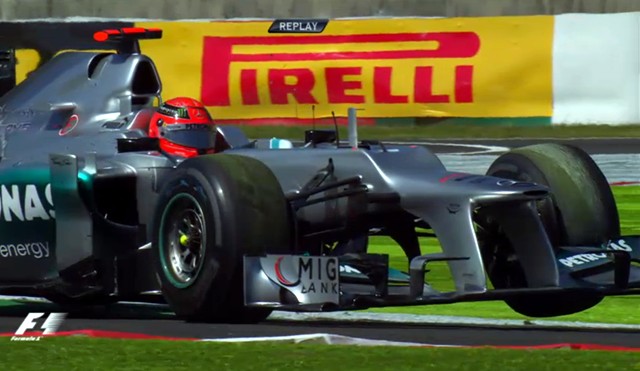 Slappy promptly blew the next turn.  Look at the green stuff that's come up on the tires!  Note: green stuff is not grass. 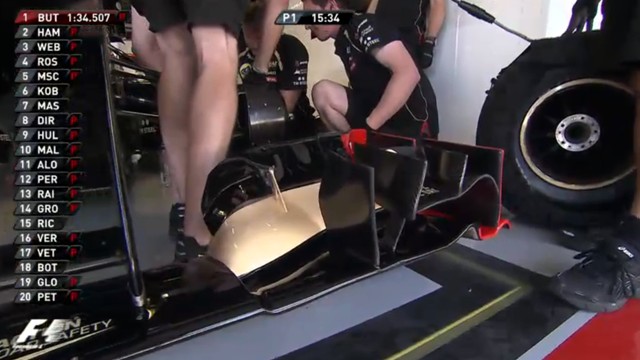 (10:02)  They just shows a super-slow-mo shot of Sebby Vettel going over a curb, and it's amazing just how much everything moves on a F1 car.  At a distance, everything seems rock-solid, but in closeup and slo-mo, you see the front wings bending and flapping, the nose of the car torquing, the tires actually moving side-to-side independent of the suspension... it's a shock the chassis doesn't just fall apart!  Instead, they're the safest things on four wheels.  Just incredible.  Can you guess nothing particularly exciting is going on on-track? 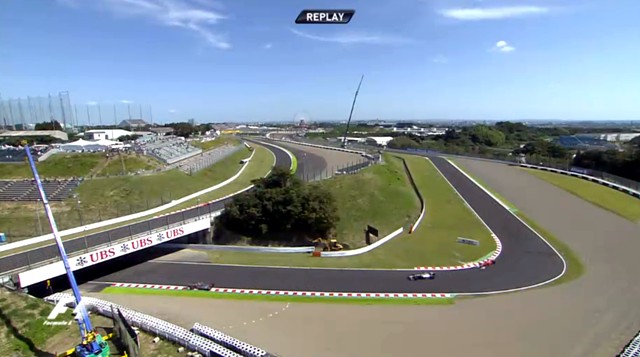 How did FujiTV miss that shot for so many years???

(0:51)  And Nico Rosberg walks away from his Mercedes, stopped on the side of the road.  How you feelin' about your team choice now, Lewis?

(0:00)  Time's up.  Looks like Jenson will keep the fast-lap honors for the session, followed by Hamilton, Webber, Rosberg, Slappy, Gandalf, Massa, diResta, Hulkenberg and Maldonado.  In other words, it's a normal practice session where you can't tell a darn thing from the results.

P2 comes up at midnight Pond Central Time... as much as I'd love to stay up and liveblog that too, I'm getting too old for that sort of thing when I've got to work in the morning.  So this'll do it for tonight's F1 coverage!  See you Friday evening for possible P2 coverage... or I may just skip it altogether and do my Quals coverage at 145am Saturday!  We'll see how it goes... until then, folks, thanks for reading!

1 Senna must be pissed at Bottas!

2 I'd think that having your seat taken for a practice session would be somewhat annoying, yeah.  I can't imagine why a team does it (money), but there you are.

3 What feed are you watching?

4 SPEED's... link is in the first paragraph.

6 Av, I haven't the faintest idea.  That's why I was asking!  Seemed rather incongruous seeing it there in the Sauber garage...

The recipient of the doll fills in one eye upon setting the goal, then the other upon fulfilling it.