F1 Quals: Italy 2018
It looked like rain.  The official FIA Weather Clowns gave it an 80% chance of rain during Qualifying. For once, being underneath the giant Ferrari banner in the main grandstand didn't seem like it'd be all that bad.  But did it rain?  Or did we get full speed, athletic-spheroids-to-the-dividing-structure action like we hoped, for Monza is the one track on the calendar where rain takes away from, as opposed to adding to, the spectacle.  So which was it?  Here's the provisional grid for the 2018 Grand Prix of Italy:
See that 1:19.119 up there?  That works out to an average speed of 163.785mph, which makes it the fastest lap in Formula 1 history.  Please note that both Vettel and Hamilton also broke the lap record in qualifying, but the Finnish driver pipped them both.  Sadly, the SKY announcers couldn't sound excited if you set them both on fire.  At least, not in any way that makes you feel it.  Yes, I'd still much rather have the Legendary Announce Team broadcasting my F1.
If you look closely at the top 10 places on the grid, you'll see they are occupied by cars from eight different manufacturers.  I personally cannot remember the last time I saw that.  Only McLaren and Sauber are absent.  But the Swiss team has a very good reason for their performance today... 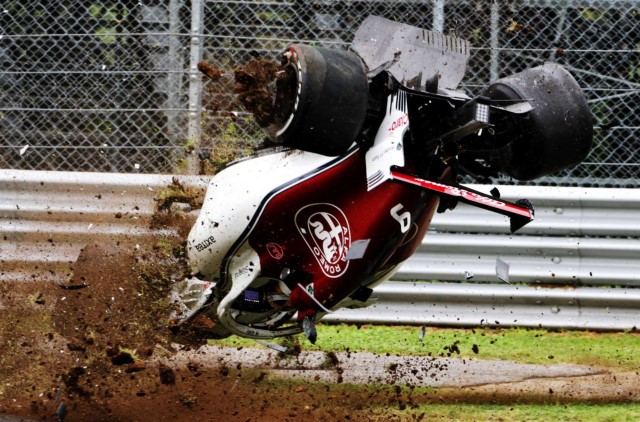 You're probably wondering how I got myself into this situation..."
In Friday's Practice 2, Ericcson was approaching Turn 1 at somewhere around 210mph or so, nothing out of the ordinary at all.  Unbeknown by him his DRS flap had actually over-opened, meaning that it was stuck that way when it came time to apply the brakes.  Doing so is supposed to automatically close the DRS flap, thus increasing downforce and allowing the car to do things like slow down or turn in a controlled manner.  Instead, the Sauber immediately speared to the left, giving the armco a 15G hit.  Then the right side tires dug into the rain-softened grass and dirt, sending the car into a tumbling, spinning, somersaulting ride that reportedly covered some 700meters.  The video is terrifying to watch in its violence:
During this gymnastic routine, he pulled 28Gs.  Once it ended however, he just stood up and walked away.  The trip in the medical car that followed was required by the regulations; any time a driver suffers an impact that sensors record as being over a certain g-force level, they're going to the medical center whether they're hurt or not.
Sauber immediately called Charles AMX-30 into the pits, only to discover that his DRS equipment had the same problem, it just hadn't happened yet.  Ericcson's car had to be rebuilt from the ground up... even the chassis was ruined.  So while Sauber is usually kinda slow, they had a good excuse this time.
You'll also note the two "DNF" entries in Q2.  Both Smiley Ricciardo and Nico Hulkenberg had massive gridspot penalties... Hulkenberg for his causing of the massive crash at the start of the Belgian Grand Prix, and Smiley for engine component changes.  Both knew there was no point to going out and burning tires when they were going to end up at the back anyway, so neither did more than an installation lap and back to the pits.
So, it'll be a fast race tomorrow... and a fast one, too, if you know what I mean!  F1U! will be along sometime thereafter.  See ya then!

1 Well that's new: Can't watch an embedded YouTube video in a blog post, you have to go to YouTube to watch.
"This video contains content from Formula One Management, who has blocked it from display on this website or application."
Seriously, guys?

2 It's not quite crony capitalism in the strict sense of the term, but yeah.  If you're allowed to view it here, you don't have to see Youtube's ads.  I wonder what the consideration to F1 was for going along with it.

3 Blocking embedding has been around for a while.