F1 Quals: Italy 2010 I have to admit that I didn't believe it when they said it, but the statistic was true.  Let's look at the provisional grid for the Grand Prix of Italy:


Just what statistic is it that had me so flabbergasted?  This is Ferrari's first pole in thirty races.  Love them or, as I do, hate them, one can't take away from the Scuderia the fact that they really are one of the top teams in motorsports history, if not the top team.  One just assumes that, even in a down season, they'd've had a pole somewhere along the way.  But no, the last time a Ferrari driver was the fastest at the end of a Q3 was Brazil, 2008.  That's almost unbelievable.

Unfortunately, it had to come from HWMNBN.  Ugh.

Team McLaren couldn't figure out whether to run the F-Duct system or not, so they split the difference.  Lewis Hamilton decided to go the low downforce route and has the little tiny wing... and ended up fifth.  Over half-a-second faster is his teammate, Jenson Button, who's got the blown rear wing, more downforce in the turns, and ended up second on the grid.  Just as way of comparison, Button was nearly a second faster than HWMNBN through sector 2 which is where all the turns are, yet lost all that time and a smidge more through the fast parts of Monza.  Button said in the post-quals presser that while the extra downforce is very handy, it also means that he has to run every lap in the race like it's qualifying, pushing both the car and himself the entire way around the track.  If it were nearly anybody else, I'd think they'd be out of the race by the halfway point, either buried in a tire barrier or with a flaming lump where the engine had been, but Button is one of the smoothest drivers in F1.

That doesn't mean he's the best; his teammate is a better driver, Vettel is quicker, Massa is showing signs of his pre-injury form, Webber is darn good, and HWMNBN might be the best pilot in F1.  Button, however, is practically gentle with his car, seeming to know exactly the best place to put his chariot to have it do what he wants it to do with the least amount of stress on the machine.  That's a very useful talent to have, and one that should allow him to make the "push every lap" work.  If it doesn't, he's almost certainly dead in the Driver's Championship.

Seb Vettel, the wunderkind of F1, on the other hand, hasn't a clue why he's starting sixth and admitted as much in the press conference.  Despite having the same equipment and the same setup as his teammate Mark Webber, he's nearly 3 mph slower.  The biggest problem, then, is that he has to attack, and attack hard right when the lights go out... which might lead to glory at the first turn, or lots of carbon fiber scattered across the chicane.  This isn't a track that's suited to the Red Bull's strengths, so if he's not out in front, and quickly, he doesn't stand a chance without incidents occurring ahead of him.

Anybody seen Slappy Schumacher recently?  He hasn't made it out of Q2 for six races running....  Speaking of streaks, I didn't realize that Toro Rosso's Seb Buemi is the only driver on the grid right now who has made it to Q2 in every race this season.  He's never made it out of Q2 of course, but that's still a pretty impressive stat: no mechanical failures, no penalties, nothing like that.

On the topic of penalties, Vitaly Petrov will be starting 20th after qualifying 15th.  He was given a five grid-spot demotion for blocking Virgin Racing's Timo Glockenspiel early in Q1... and how embarrassing is that?  You're penalized for holding up one of the slowest cars on the grid... meanwhile, your teammate has outqualified you for what seems like the 733rd time in a row.  Eeeeesh.  We do hear that the McDonald's in Irkutsk is hiring, so he's got that going for him, which is nice. 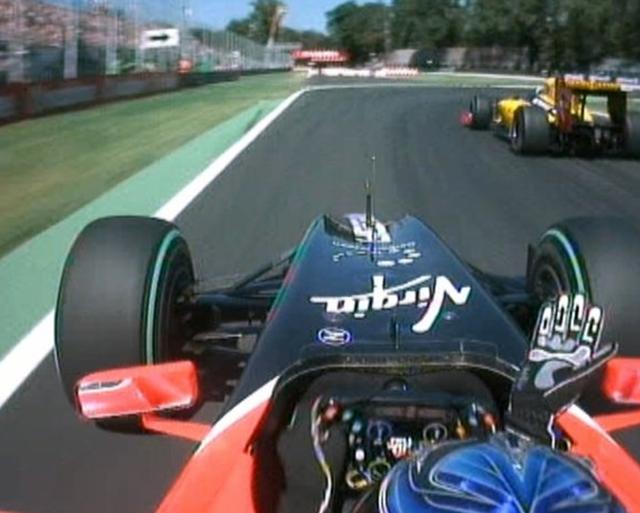 Timo Glockenspiel expresses his displeasure, disbelief, at being blocked by Petrov
Race is tomorrow morning, with the F1U! sometime thereafter!  See you then, if Petrov doesn't get in our way.