F1 Quals: Canada 2013 (UPDATED) Rain.  Rain changes everything.  One moment of distraction, one millisecond of hesitation, and the lap, the race, the car is lost.  Just because the pavement is so slightly damp that a Ford Mustang wouldn't notice it.  That was what the drivers faced when Q1 began this afternoon at the Ile Notre Dame.  Who got bit?  Qui a vaincu la pluie?  Here's the provisional grid for the 2013 Grand Prix of Canada:


About five minutes before Q1 began, rain started to fall lightly amongst the trees and marmots of the Circuit Gilles Villeneuve, prompting the first major decision of the day: do we go out on dry tires and hope to get a good lap in before it gets too wet, or do we go right for the intermediates?  Most of the teams gave the dry tires a go, with a very few staying in the garage.  Those that didn't try the dry rubber made the right call; the first couple of minutes of the session were spent watching multi-million dollar, high-tech, space-age, hand-crafted equipment spin and pirouette like they were driving on ice.  Once everybody got back to the pits and put on drizzleshoes, things began to settle down a tad.  It wasn't until Q2 that things began to get weird.  In the second session, the rain began to fall a little bit harder... nearly enough to switch to full wets, but not quite.  I'm betting Felipe Massa wishes he had changed, as he wound up slamming his Ferrari sideways into a tire barrier, for the fourth time in two races.  As this occurred very near an important piece of run-off area, a red flag was thrown... with two minutes left in the session, and some very unlikely people on the verge of elimination: Raikkonen, Button, Sutil.  When the notification came that the track was about to reopen, we got this scene at the pit-out: 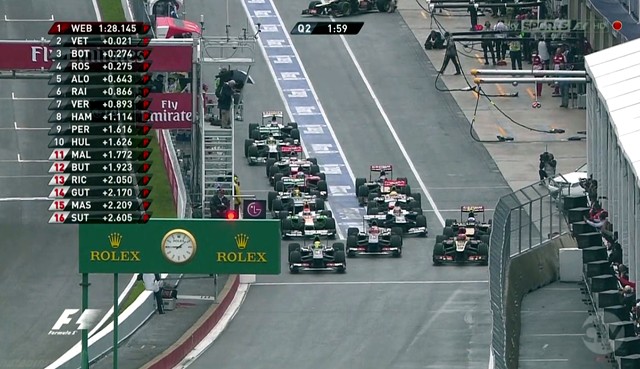 As long as you start your timed lap with one second left on the clock, the lap will count.  So there was time... just... to get out of the pits, get around the circuit, and cross the start/finish line for one last chance at moving on to Q3.  See Kimi and Daniel Ricciardo there on the far right?  They and three others have been summoned to the steward's office for not lining up correctly to re-enter the track.  There could be penalties, but I'd not hold my breath.  The light went green, the Benny Hill Theme began playing, and everybody managed to make it around without doing grave bodily harm to themselves or others.  Some succeeded in their quests to make it to Q3, but Jenson Button couldn't.

In Q3, we had the never-before-seen sight of Valtterri Bottas placing his Williams third on the grid in wet-but-not-as-wet-as-Q2 conditions.  Rain is the great equalizer.  Always has been, always will be.  Vettel, of course, is on pole, while Mr Every-Other-Year-In-Canada, Shiv Hamilton, is next to him.  He's won here three times, every other year.  In the years he hasn't won?  DNF.  He won last last year...

All I'm saying is don't put any money on Shiv.

Race tomorrow afternoon... the F1U! crew is praying for rain.

UPDATE: Kimi and Ricciardo were penalized two grid spots for jumping the line.  The other three got away as they received no benefit.

1 It is really strange to see Williams in 3rd place. When I saw that, I thought "who?"

2 We saw it once last year, when Maldonado went on to inherit pole from Hamilton at Spain, a race he went on to win.  Then in 2010, Nico Hulkenberg coughed up a pole at Brazil and held first place for two entire turns.

This used to be one of the most dominant teams on the grid.  Now they're a sad afterthought.