F1 Quals: Abu Dhabi 2012 (UPDATED) In the previous three races at Abu Dhabi, there have only been two men on the front row: Shiv Hamilton and Seb Vettel.  Considering the way the end of this season has been going , it's practically a guarantee that Vettel'd be there, but would Hamilton hold up his end of the bargain?  Here's the highly provisional grid for the 2012 Grand Prix of Abu Dhabi:


Sebby Vettel has had a fraught day.  First he missed almost all of P3 with a brake problem on his RB8, then in Quals his car seemed to be suffering from a balance problem.  Despite all this, he still ended up third on the grid... for the time being.  Y'see, after the session ended this happened: 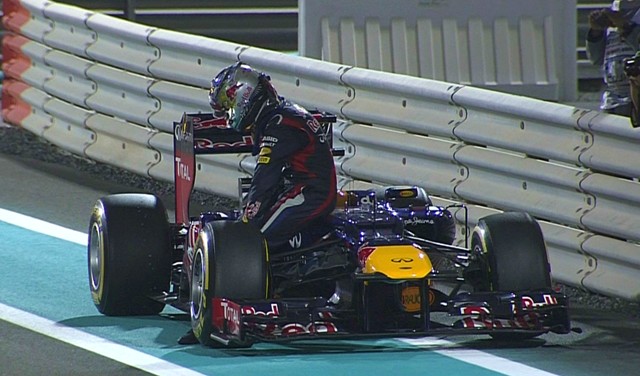 So a lot of things happened at once here, so let's run them down.  First, the pit wall called Vettel and told him (with some energy, I might add) to "park the car, park the car."  Quickly thereafter, the indicator on his steering wheel showed a shift from Third gear directly to Neutral.  Then in an interview afterwards, Christian Horner, team honcho for Red Bull, told SKY that "the engine provider told us to stop."  So many possible penalties to look for... gearbox change (for the jump from 3 to N), engine change (the cars are in parc ferme condition), unable to get back to the pit lane after Quals (Hamilton lost pole position in Barcalounger for that one), and too many engines used (this was Vettel's eight and final allotted engine on the season).

HWCBN(UCC) has got to be awfully happy at this possibility.  I know I am.  More to the point, the Ferrari driver may have an opening to cut the lead back down to single-digits or even take a lead again.  We won't know for a while what, if anything, will happen to Vettel; I'll keep an eye out and update as information warrants.

UPDATE: Vettel has been sent to the back of the grid for violating Article 6.6.2 of the Technical Regulations, which states that any car at the end of Q3 must have a liter of fuel available for testing.  Not making it back to the pits under its own power is also a violation, but if the team can explain why it needed to be stopped, it is often allowed, and that's what occurred here.  However, once Scrutineering got a hold of it, there wasn't enough fuel... depending on whose explanation you read, there was either 850ml or 150ml left in the tank.  As a result, Vettel is sent to the back of the grid.  However, the team immediately broke parc ferme to attempt to repair whatever required him to stop on track, and he'll be starting from the pit lane instead.  If HWCBN(UCC) is going to have a chance at the Championship, he has got to make this opportunity count.

1 Very impressed with both the RB & McLaren's tires. Both teams are keeping the max potential going. Ferrari, Lotus & Williams look just a 1/4 step behind in degradation after P4. I really do hope this is a interesting race.

2 Well, the last time someone got booted to the back of the grid, Hakham Maldonado got the win, then the Williams garage area exploded.  If past results are anything to go by, it'll be a VERY interesting race.