F1 Practice: Monaco 2013 Nothing too big to report on "today".  Beautiful day, and other than Lettuce Grosjean scraping the left side of his car clean of any projections in Sainte Devote, nothing impressive occurred.  Team Mercedes is being tabbed to take pole on Saturday, and people are saying that, since Monaco is so impossible to pass at, they've got a good chance to win.  The famous "Get Pole, Be Slow" technique, I guess.

Maybe.  I don't see it, but maybe.  There's just way too many ways for that strategy to go wrong around Monaco.  But then, that's why they drive and I commentate. 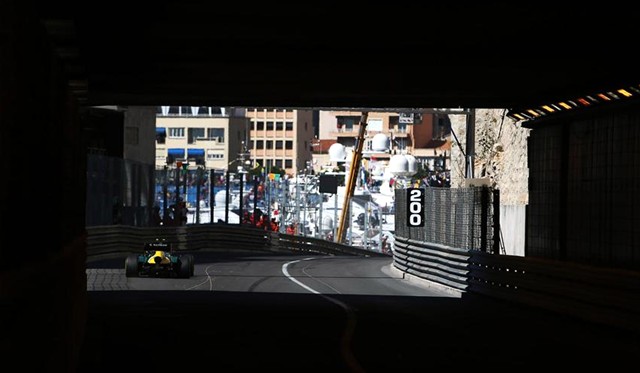 Well, that and I'm not rich and I weigh more than 140 pounds.

1 Are the drivers really small like that? I had never really thought about it before.

2 I exaggerate, but not by much.  In 2010, Felipe Massa was the lightest driver, at 130lbs.  Rubens Barrichello was the heaviest at 170lbs.  As one would expect, the older drivers were heavier than the younger.

The FIA mandates that the minimum weight for the car (including fluids and onboard cameras) + driver is 1415lbs.  Most cars weigh a lot less than that, so they use ballast placed at strategic points around the chassis to make minimums.  That can make a huge difference to the center of gravity, grip, etc etc etc.  Having a lighter driver means you can use more ballast.

Actually, I'm surprised there haven't been more women drivers looked at in the sport simply because of this.  Danica Patrick is 110lbs, for example...

3 They would be jockeys in another era.

4 Jockeys are a lot smaller than that.