F1 Practice: Britain 2011 Ah, to be in England in the summertime... just don't forget your umbrellas, raincoat and galoshes.  Other than a fifteen minute long stretch in P2 right at the end, what we had was the textbook definition of a wet track at Silverstone.  Very wet.  Nearly "boat racing" levels of wet.

While watching the most highly skilled drivers in the world look like they've never even heard of a car, let alone actually drive one, was mildly entertaining, it did nothing to answer the burning question of the day.  That being, of course, what effect will the Open Throttle ban have on the myriad racers and particularly the nigh-on unbeatable Red Bulls?  Since the heavy rain made even the relatively simple task of keeping the cars on track nearly impossible, nobody knows what's going to happen once they have a dry track under them.

There's been a clarification of the ruling from the FIA.  It turns out that the ban isn't actually a total ban.  Instead, the teams can keep the throttle open about 10% instead of at full force.  Legendary Announce Team tech guru Steve Matchett did a great job explaining how this trick works.  In essence, when the driver takes his foot off the "make noise" pedal, thereby closing the throttle, the engine changes modes.  Instead of burning fuel in the classic "suck-squeeze-bang-blow" routine of the internal combustion engine, when the throttle is closed the engine becomes a highly efficient pump, accelerating nothing but air through the exhaust pipes and over the diffuser, thereby keeping the downforce at a constant.  Just how the teams accomplish this neat trick is an exercise for the tech nobbins out there.  That also explains just why the FIA declared the trick a violation of the "movable aerodynamic device" rule.  The pistons are moving, after all!

Now that the FIA has taken 90% of the benefit away, the teams are screaming that they should be allowed to have 20% of the trick.  Or 25%.  Or whatever number that's greater than 10% that they feel like throwing out there.  It's all somewhat farcical, except the teams actually have something of a point here.  As I mentioned before Valencia, the cars that use the Constant Throttle trick were designed with it, meaning that it's required to keep the cars stable and safe.  At least, that's how their argument goes.  The fact that they can make this change without rebuilding the entire rear end of their cars makes me think that perhaps it isn't as critical as the teams would like us to think.

Or maybe it is.  In P1, Gandalf Kobayashi got his Sauber a little squirrely on some of the astroturf edging the front straight.  He got sideways, hit a bump, and once again we discovered that, under the right conditions, F1 cars really can fly.  Short distances, and not well, but they can.  Alas, when he returned to earth, the right-side wheels dug in, and this resulted: 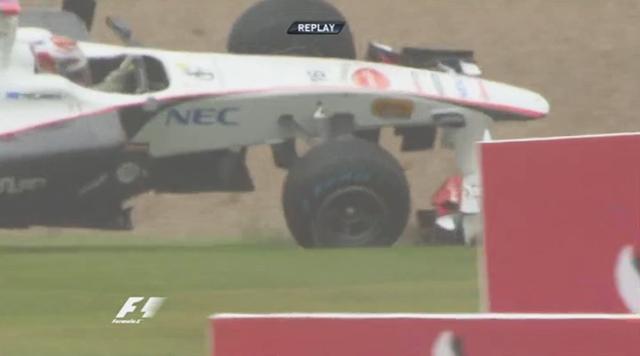 To me, there's no worse accident than one where a F1 car gets upside down, unless it's one where the car is tumbling, and that's very nearly what we got here.  Would the increase in blown diffuser downforce had made a difference here?  No, as Gandalf had his foot down as hard as he could given the conditions, given that he was accelerating off the final turn.  Just mere luck kept him from the grim tumble.

Quals in the morning, maybe it'll be dry then!

1 That also explains just why the FIA declared the trick a violation of the "movable aerodynamic device" rule.  The pistons are moving, after all!

The FIA seems to ban a lot of the teams' technical gimmicks on the grounds that they're movable aerodynamic devices, even if none of the components of the gimmick in question are actually in the airflow (Renault's tuned mass dampers come to mind here).  Given that, it's ironic that the one gimmick that has improved Formula 1 racing dramatically this season, a gimmick the FIA itself came up with and championed, is the drag reduction system--a movable aerodynamic device if ever there was one.

It may not be as sordid as you think. The league has an interest in keeping the sport competitive, so that the races are exciting. If the FIA itself comes up with a new way to make the cars faster, and gives it to all the teams equally, it doesn't unbalance things.

If one team comes up with something new and incredible which makes their cars significantly faster than anyone else, you could end up with a run-away season where one team totally dominates. (ahem)

...that it's happened this year doesn't change the fact that FIA doesn't really want that kind of season. If fans and sponsors think "Ho hum, Vettel wins again" after every race, FIA suffers.

3 The league has an interest in keeping the sport competitive, so that the races are exciting.

Actually, I agree with you on that point, Steven, and DRS has improved the racing greatly.  I just wish the FIA would find a different way of keeping the teams on a level playing field, instead of running around trying to close a thousand and one loopholes in the technical regulations (often with the "movable aerodynamic device" dodge, whether it's applicable or not).

Some racing series have/had a "victory ballast" rule--a driver that won a race would have (for example) 5 kg of extra weight added to his car for the next race, which would slow the car down just a little.  If he won that next race, he'd have another 5 kg of ballast added for the race after that, and so on.  This would help keep one driver (or one team) from running away with the entire season.  Perhaps a victory ballast rule could work in Formula 1.