F1 on TV: Hungary 2015 So.  Not only do we next travel to Hungary, my least favorite track on the Formula 1 calendar, it's going to be the site various Bianchi tributes.  It's going to be a long, sad race weekend.  Here's the track map: 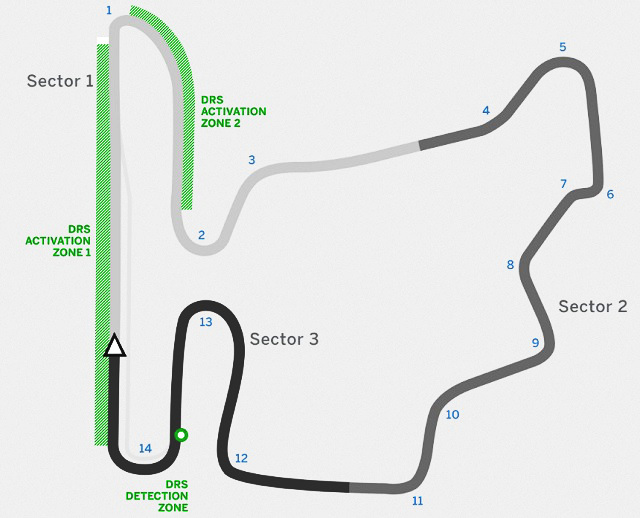 "Monaco without the glamor", they call it.  Originally designed to be a street circuit running through Budapest, when that fell through the promoters reportedly just took planned circuit's layout and moved it to a natural bowl nearby.  Perhaps unsurprisingly, a street circuit without any streets doesn't, in fact, work all that well.  It's usually hot, often dusty, the track is boring, and it only coughs up a good race when it rains.  It's even better when it rains heavily here at Pond Central, because then there's a chance my satellite feed will go out.

The FIA has announced that they'll be retiring car number 17 from consideration of future use, in honor of Jules Bianchi.  As you may or not be aware, as I've tended not to mention it much, F1 drivers now get to choose their car number when they join the sport; it then sticks with them until they retire.  So if you choose, say "23" when you're a Sauber driver, you're still 23 when you move to Ferrari.  The only variant to this is the reigning World Driver's Champion... he has the option of using number "1", and while traditional, it isn't mandatory; Lewis Hamilton, for example, is NOT using it this year.  Instead, he's using his #44.

There's a rumor that the paddock will do a minute's silence on race day in honor of their fallen comrade.  I'm sure that will happen; I'm wondering what else will be done.  The race after that Awful Weekend in 1994, the first two spots on the grid were painted in the national flags of Senna and Ratzenberger, and pole position was really #3 on the grid.  I like that idea, to be honest.

Speculation is flying around what Ferrari will do.  In times of mourning, such as the death of Pope John Paul II, the team has raced a red car with no logos of any sort and a black nose.  As a member of their Young Driver's program and tapped to drive for the team a lot sooner, rather than later, I wonder if they'll do that again.  The black stripe on the nose is quite understated and classy, I think.  I'm sure the rest of the field will have the #17 on their cars, or some other similar tribute to Bianchi.  Manor, on the other hand, has been tight-lipped.  The team that owes its very existence to his driving, what will they do?  Guess we'll find out on Sunday.  See yo then.

2 Nope, it's a "technical driving center.*"  Looks like a lot more fun than the actual circuit, really.

3 I tried to make a similar comment about the school earlier today (though without the helpful video link), but aksimet kept refusing my comment