F1 On The NBC Networks: Montreal 2013 After the slow crawl through the narrow streets of a tiny French fishing village, the F1 Circus makes its way across the pond (as opposed to crossing The Pond, which you do at your peril) to Montreal.  Here's a look at the track map for Circuit Gilles Villeneuve, home of the 2013 Grand Prix of Canada: 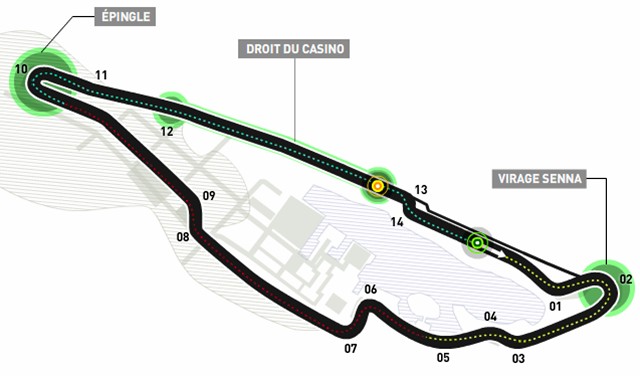 Oddly, there are many similarities between Montreal and Monaco.  Both speak French, for example, but I was more interested in the tracks.  Both are hard on the brakes; Montreal is the only place I've ever seen a brake disc explode, for example.  Both are relatively narrow with close walls, though Canada has more run-off room in general.  It's still no Abu Dhabi, though, and is quite unforgiving.  Both tracks will have the super-soft tires on hand, though Canada will also have the mediums available (Monaco had softs).

There are plenty of differences, of course.  Where Monaco is a high-downforce circuit, Montreal is just the opposite.  Lots of fast bits broken up by slow, slow turns categorize Canada, which is why the brakes get such a workout here.  You're just stomping on the clampers here.  Also, in Montreal they've got better beer and worse food than in Monaco, unless you like donuts.

Which is to say, Canada is a fun track, arguably the best in F1 (though I wouldn't vote for it).  There's always safety cars here, the weather often plays a part (2011: two hour rain delay!), and good races are common.  And the Legendary Announce Team will be bringing it to us with their usual je ne sais quoi.  Here's the broadcast schedule:

Whaddya know, a race you don't have to get up at 530am for!  Yay us!  Of course, F1Update! will be all over the race, or something like that, so don't move a muscle.  Ever.

2 But Montreal has real boiled bagels, or so they say.

3 Also, Montreal has the only guidebook ever written by H.P. Lovecraft.

(In character. As a 17th century guy. Yes, we the fannish are weird.)

4 @Steven: technically, they have marmots on the Ile Notre-Dame, but the difference probably only matters to zoologists and other marmots.

5 It wouldn't matter to the driver of the F1 car that hits one by accident.

6 2007 is a long time ago, I'm afraid.  They've barely been seen at the track since then... and Super Aguri has long since shut down, alas.