F1 On The NBC Networks: Monaco 2013 If Silverstone is the birthplace of Formula 1, Monaco is its soul.  The glitz, the glamour, the money, the casino, the royalty, it is everything that the sport could have possibly hoped it would become back in the old days.  Let's take a look at the track map for this historic circuit: 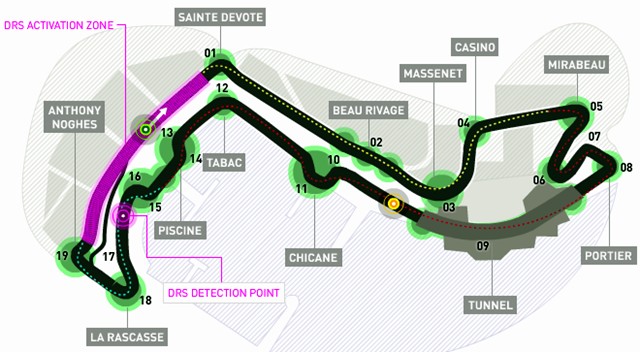 The odd thing about this ultimate street circuit is, of course, that it would never be allowed on the calendar if it was proposed today.  It's too narrow, there's no run-off area to speak of, it's immensely dangerous... and it is glorious.  Win here, and you walk with the legends.  If a team or a driver could only win one race in a season, it would be this one.  It is the ultimate challenge to drive well.

For all that, it's not a great racetrack anymore.  Cars are wider and faster than they used to be, so you often get a processional around here... unless it rains.  Which, considering Monaco's location on the Mediterranean, happens fairly often and with only small amounts of warning.  Anyway, while individually many of the turns are wonderful, the run past The Swimming Pool (13-14-15-16) in particular, as a whole it's probably the hardest track on F1 to drive.  No mistakes are ever allowed, no slacking of attention.  It's perhaps the only circuit in Formula 1 where driver skill can take priority over car.

In some ways, this is the least subtle circuit on the calendar.  Downforce?  As much as you can crank on the car, and more besides.  The rules say you can't attach a barn door in place of the rear wing, but if you could, the teams probably would.  Track speed?  Slow.  It's the lowest average speed of any race we'll come across on the calendar.  Perversely, while there's no grip in the tarmac due to their everyday use as public streets, the circuit isn't gentle on tires... because there's no grip in the tarmac.  The tires almost slide over the street surface, which isn't the way they're supposed to work.  Take a pink eraser and rub it over the asphalt of your parking lot, see how much of it comes off... that's kind of the way tires work at Monaco.  Both brakes and engines have cooling problems around The Principality as well; both require airflow, preferably high-velocity airflow which is in short supply here.  So the brakes heat up and never really cool off... that's fine to start with, but when the carbon/carbon discs get too hot, they begin to glaze, reducing efficiency.

We're going to have something unprecedented this weekend: a European F1 race live on US network TV, and the Legendary Announce Team will be bringing it to us!  Let's take a look at the schedule:

As is tradition, there are no race-related activities on Friday, so as to let the multimillionaires and billionaires to come home from St Tropez or Moritz or Newark.  Of course, F1 Update! will be all over the race as well... rejoice!  See you then! 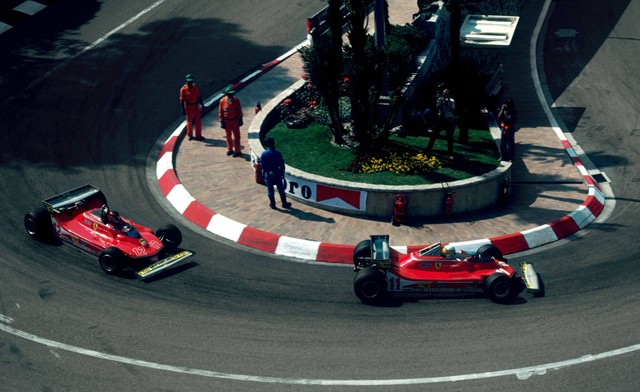 1 Villeneuve papa and Jody Scheckter, the latter wins in T4 #12