And Monza was its Holy Church. 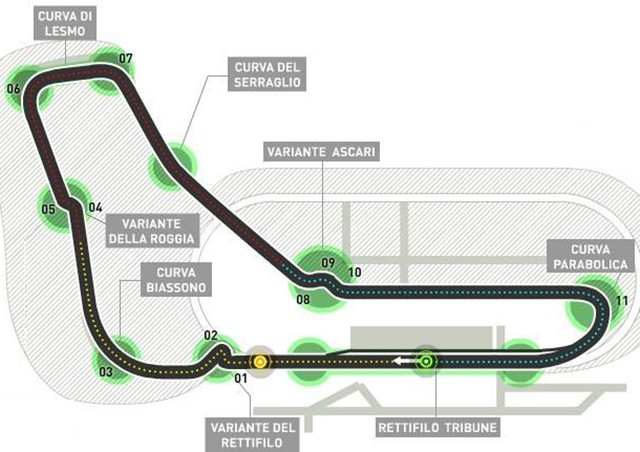 There was once a time at Monza when a driver would simply stomp on the gas pedal and not lift off until the car broke or the race ended.  Today... well, not much has changed, actually.  A modern F1 car is on full throttle for nearly 80% of the lap, a truly punishing endurance test for an engine when you consider that we're talking nearly 90 minutes at 18000rpm.  They'll reach 210mph at the end of the front straight, just before braking for the Variante del Rettifilo.

At Monza, terms like "downforce" and "drag" are dirty words.  Cars run with the bare minimum amount of wing possible; if their use wasn't mandated by the FIA, the teams would probably go without.  In fact, the use of the rear wing is so minimal here that many of those teams that run an "F-Duct" system are likely to find the feature useless around this track.

SPEED will bring us its usual sterling coverage beginning from 7am to 840am on Friday, with the day's 2nd Practice session.  Saturday, from 7am to 830am, we'll see the usual Quals session.  And Sunday brings us the 2010 Grand Prix of Italy LIVE from 630am to 9am, with a replay from 12noon to 230pm.

If I had to bet on the race, which fortunately I don't, I'd probably lean towards McLaren.  Like Spa, this is not a track that favors the Red Bull chassis (and their remarkable action around turns), and I feel like Ferrari is just smoke and mirrors for some reason.  But that's why they actually run the races, isn't it?  See you then!

1 It's truly a great place to watch a race too.  The food & weather plus the grounds all make you welcome. The tifosi are amazing in their fanaticism & very loud too. One of the jewels of F!.

Great preview!  Looking forward to the race...and lamenting that the year is winding down too fast.