F1 on NBCSN: Italy 2014 Some Formula 1 circuits are like a needle-sharp rapier, requiring nigh-on superhuman levels of technique and skill to handle in a way that endangers your opponent more than yourself.  Some others are as graceful as the best swordsmen in history, full of strength hidden beneath talent honed by years of practice.  Some tracks seem to follow the way of the archer, still and quiet until they launch their deadly arrow with precision and accuracy.

And then there's Monza, home of the Italian Grand Prix. 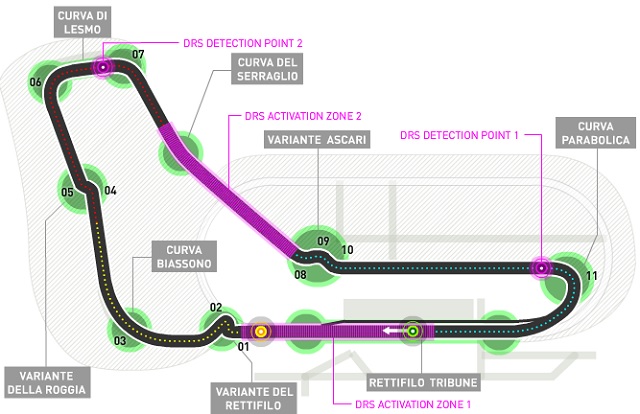 Monza is the screaming Viking berserker, swinging a huge battleaxe and leaving a huge swath of pain and defeat in its wake.  It is a heavy mace crushing a helmet under its momentum.  It is three rolls of quarters in a sock applied liberally to the back of someone's head.  What I am saying is that Monza is not subtle.  Monza does not need to be subtle.  Monza is speed and nothing but.  Before the three Variantes (aka "chicanes") were added, Monza may as well have been a NASCAR circuit seen through a European lens, though don't ever say that to a European F1 fan... they hate any comparison to NASCAR, or any possibility that anything American could ever come close to their beloved Series.

And after what the circuit did in the offseason, it's even closer to NASCAR, for they paved over the kittylitter outside of Parabolica.  There are no longer any potential consequences for running overspeed on the fastest circuit in Formula 1.  And fast it will be; the teams are predicting they'll be hitting nigh on 225mph just before they brake for the Variante del Rettifilo this year.  This pronouncement brought the stupidest headline ever to one F1 website: "High speeds expected at Monza."  Next on Eyewitness News, water is wet, the sky is blue, and fire bad.

This need for speed comes with a price, of course: it's death to engines and tires both.  Mechanically, a car spends a huge chunk of the lap with the gas pedal bolted to the floor, which puts a huge strain on the noisy bit behind the driver.  The tires suffer as well, since Biassono and Parabolica are balls-to-the-wall high-speed curves, Serraglio practically an afterthought when it comes to braking, and the remaining turns are dealt with by braking late, hard, and as little as possible.

As I said, Monza is not subtle.  What subtlety there is will be divulged to us via the dulcet tones of the Legendary Announce Team.  Here's the broadcast schedule:
FRIDAY
Practice 2: 7a - 830a
SATURDAY
Quals: 7a - 830a
SUNDAY
2014 Grand Prix of Italy: 630a - 9a

All are live and on NBCSN this week for a change.  Of course, the F1U! team will be watching the proceedings with a gimlet eye.  Join us, won't you?