F1 On NBCSN: Great Britain 2013 I say "...on NBCSN" with the utmost nervousness and caution, as I'm unable to find anything remotely resembling a schedule that I believe for this race.  It's all because of that darn Tour de Pharmacopeia that NBCSN is also covering.  Things are moved all willy-nilly and higglety-pigglety, so much so that I just threw my hands up in the air and went "you're on your own this race."  Having said all that, let's look at the trackmap for this, the grandpappy of all F1 races: the Grand Prix of Great Britain! 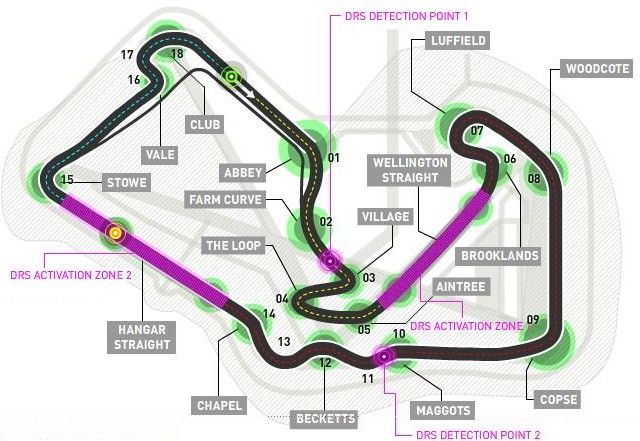 Silverstone is not the fastest circuit, nor the slowest, nor the hilliest or the most narrow.  It IS, however, the birthplace of Formula 1 and the home of my favorite complex of turns.  Maggots-Becketts-Chapel isn't really a chicane, and it isn't really a "turn" the way we think of them.  It's more of a series of lateral suggestions that become more and more emphatic the farther into them you go.  I've always said that I'd love to be positioned on the inside of Turn 13, looking towards Maggots, for a race.  Seeing the cars slalom like so many life-sized slotcars would be amazing.

Do any of my readers know what slotcars are?  I wonder.  One of the few good memories I have of the paternal side of my childhood was going to Slot & Wing in Rantoul, a hobby shop that had a couple of  1/24-scale, eight-lane tracks, and running wild on the high-bank.  But I digress.

Tires should either be completely worthless or too good here.  Nobody knows, and Red Bull will be happy to complain about it to anybody who cares to listen.  Speaking of tires, remember how we talked briefly about the "Tiregate" scandal of a few weeks ago?  Pirelli held a tire test and asked Mercedes to run 1000km... which is against F1's in-season testing rules.  The FIA's High Court ruling came down a couple of days ago... and Mercedes is doomed.  DOOMED, I tell you.

They've been banned from the upcoming "young driver test."

Yup, that's it.  That's all.  Oh, and they got a reprimand as well.  Much like the UN's "strongly worded letter," a FIA reprimand has not a lot of teeth behind it.  Any team will tell you that they'd rather test with their REAL drivers than with their up-and-comers, which really does give Mercedes an advantage.  I'm unsure of how they got away with it, but they did.

So that's where we stand going into Friday's practice sessions, Saturday's Quals, and the race on Sunday.  Again, for this one you're on your own as far as when the sessions are televised.  Sorry, but once out of six or seven seasons?  I can be excused.  Of course, F1Update! will be all over this one like white on lice.  See ya then!

2 I think Mercedes got away with it because Charlie Whiting kinda sorta maybe implied that it might be okay for them to test.  Also probably because the FIA doesn't want to give Mercedes a reason to pull out of F1, as some of their shareholders have said they would like to.

3 We had a slot-car set when we were kids. It was great.

The King of Rac... err Tour de France pretty much takes over the network the first three weeks of July, so expect bad things to happen to Formula One coverage for the German Grand Prix as well. Looking at the schedule, looks like TdF coverage is actually reduced over previous years.

5 Slot and Wing?! Wow, that takes me back. I grew up in C-U and remember it well. I bought models there, and at least one RC car, and slot car parts, and... yeah, good times. To see it mentioned randomly on your blog brings a smile.
I'm a friend of Vaucanson's Duck from SF, longtime reader, first-time writer. Love the blog. I think you are the originator of the F1 rabbit hole I've been wandering in for a few years. Thanks for that. Godspeed, sir.

6 Ah, you went to Slot and Wing after it moved, then?  Excellent!

Vauc has mentioned you a number of times... you run a garage, often watch the races with he and Geese (or they watch with you), no?  Thanks for delurking, don't be a stranger!