COTA Swag I dragged myself into the Duck U Bookstore today, the way anybody who's in the middle of a really short work week does.  All in all, just a 'meh' sort of day, y'know?  Yeah, you know exactly what I'm talking about.  Where was I?  Oh, right, right, dragged myself into work, expecting I'd just be doing another day of entering textbook adoptions, getting ready for end-of-semester buyback, that sort of thing, when Our Man Dan walks in.  Dan, you may remember, was brought in by the Foodservice company that serves the Circuit of the Americas to help with the 2012 United States Grand Prix.  He was also supposed to bring back some souvenirs of the circuit for me... and in this, he succeeded beyond my realistic dreams! 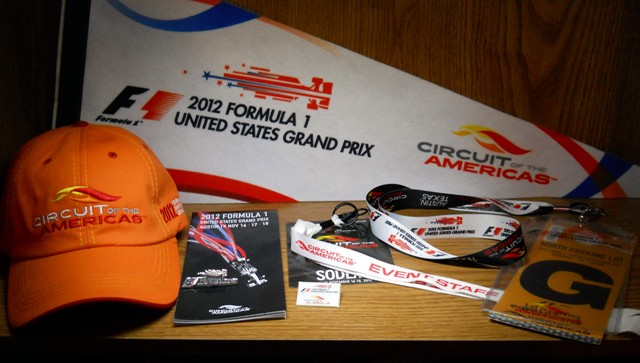 Here's the whole thing; click on the picture for a larger version.  What we've got is the CotA ballcap with the 2012 USGP logo on one side, and the trackmap on the other, the official CotA schedule/map, a couple of pins, a CotA Event Staff lanyard, a regular CotA lanyard with a staff parking pass, and of course the pennant in back.  Baby!  I was just blown away by it all this morning.  It turns out he wasn't stationed at Turn 19, as they had originally planned, which is why he didn't bring me in any carbonfiber shards.  No, instead he was all over the circuit, and apparently has already been told that he'll be back next year.  And so will I... I've already made the decision, I'm gonna be there in 2013. 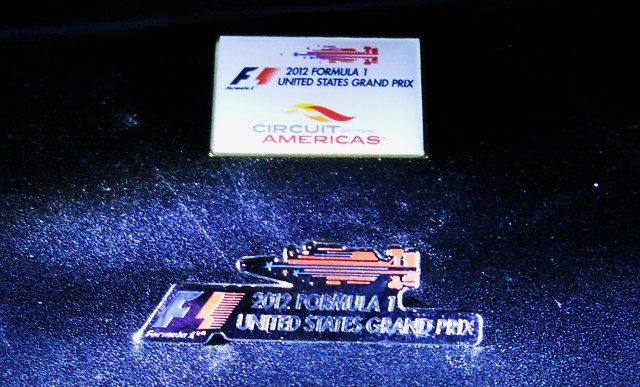 Here's a closeup of the pins.  Dan was amazed at how loud the cars were, even though I warned him.  I think we may have a budding fan in the making, actually...

1 That is really cool!

Do you think your friend would consider selling the two pins for $50?  I'm working as a Flag Marshal at the event. I'll be there Thursday through Sunday this year.  I don't know what station I'm working right now, but expect to shortly.  Please use my email above.  Thanks, Scott.

4 Actually, Scott, the pins are mine... and while I may be down on F1 right now, I'm still a fan.  They aren't available at any price.

However, it's ridiculously cool that you're a Flag Marshal for the race this year!