2014 GP Of Japan, As It Happens. 1:14am Pond Central Time: The field started behind the Safety Car, did two laps, the red flag came out, and the entire field formed up in order in the pit lane.  We're now waiting it out.

The race organizers, Honda (yes, that Honda... they own the track), really dropped the ball on this one.  They were given the opportunity twice to start the race earlier, as much as four hours earlier... and turned it down.  For once, the FIA and Bernie E are blameless.

Gazebos covering the cars.  Fans are wet and sad looking, despite the rainbow of ponchos.

More as info comes.  Race will restart at 1:25am PCT

1:25am PCT:  And we're off again, still behind the Safety Car.  The teams are saying that there's going to be about 20 minutes without rain.  HWMNBN just died on track, he looked immensely peeved with the world as he stalked off-track.  Looks like water got into the electronics, maybe.

1:30am PCT:  Both Mercs are having problems.  Rosberg's telemetry is intermittent, Hamilton's brakes are acting up.

1:45am PCT: At the end of Lap 9, the Safety Car is coming in and the race is (finally) under way.  Back if anything happens!

3:13am PCT: The race is red flagged and called off on Lap 44.  Marussia's Jules Bianchi was involved in a huge accident at Turn 15 07.  Adrian Sutil was involved somehow as well.  We never saw it exactly; the BBC says that Sutil slid off in the rain, then when his car was being recovered by a front-end loader, Bianchi crashed at high speed into the loader.  Many grim faces, no celebrating on the podium, no champagne.  This one I think is really bad.  I mean really bad.  More info as known or in the morning.  Later in the morning, I mean.

3:36am PCT: Jules Bianchi was taken from the circuit by ambulance in an unconscious state.  The helicopter couldn't fly due to conditions, but the regs say if an ambulance can get to the nearest hospital in 20 minutes or so, the race can still go on.  The hospital in Nagoya is 30 minutes away, apparently, but Bianchi's ambulance has a police escort. 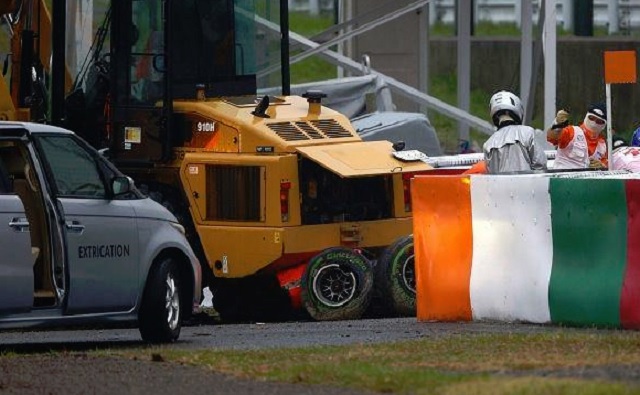 More info in the morning, I've got to pack it in.