The Duck Collector's Holy Grail I'm sure that most of the readers of The Pond are aware that I collect rubber duckies.  The Flock is nearing 500 members, so I've got all shapes and sizes of duckies: huge duckies, tiny duckies, devil duckies, cast iron duckies, the list goes on and on.

It's also no surprise to my readers that I'm a fan of anime.  In particular, I tend towards what are called "slice-of-life" shows.  In recent times, the best slice-of-life show to air was called Hidamari Sketch, which starred a rubber duck and six art-school students.  This particular rubber duckie, called Yuno's Duckie, is quite possibly the duckie I wish to have in The Flock the most... but that's a personal thing, my own wish and desire.

However, for serious American rubber duckie collectors there is one particular style of rubber duckie that is very difficult to obtain.  It's called a Tolo duckie, so-called because of the maker, Tolo Toys.  They're a UK company that sells children's toys and playthings... and they don't sell here in North America at all.  Back in the days when the internet was fresh and new, I stumbled upon a website that, amongst other things, had a "webcam" of a rubber duckie doing things (sitting on a balcony, sitting on top of a computer monitor, sitting in a combat boot, stuff like that).  That particular duck was my first exposure to a Tolo duck (though I called it a "chubby duckie" instead), and I immediately wanted one... and this predated my heavy-duty duckie collecting!

How hard is it to get one here in the US?  Over at The Web's mecca for rubber duckie fans, Duckplanet.com, there was a forum thread where the participants wound up getting a dozen or so of them from a shop in New Zealand, but only after places in the UK and Australia wouldn't do it.  So a chubby Tolo duckie is, truly, the Holy Grail for any rubber duckie fan.

Ladies and gentlemen, boys and girls, friends, Romans, countrymen... I have gained the Holy Grail. 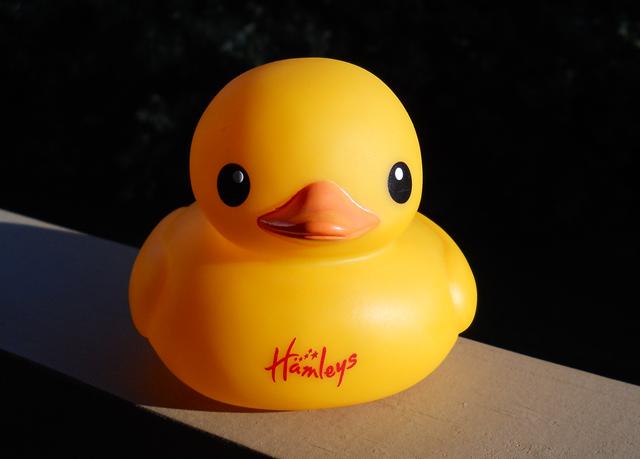 According to Ph.Duck, this was the only rubber duckie anywhere in Northern Europe.  Y'see, he was visiting family in Sweden last week, and went looking.  As he put it, he purchased the duck from a British toy store chain in a Danish city using Swedish kronor while waiting to get on a French-made airliner to fly to America.  I would have loved to have seen the look on the customs agent's face when Ph.Duck answered "A duck" to the usual question "Do you have anything to declare?"

Even better, Ph.Duck had no idea there was anything particularly special about this duckie, had no idea that I would practically wet myself with excitement when I pulled it out of the bag at dinner last night. 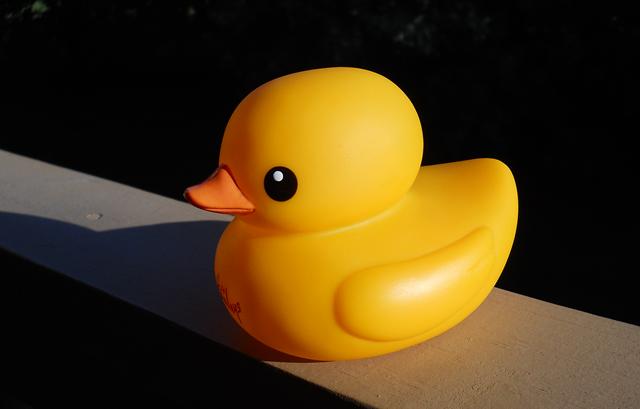 It's actually hard for me to believe that I have my own "chubby duckie", after all these years.  Thanks, Ph.Duck!

1 Did he spend any time in quarantine after "crossing the pond"?  I'd hate for your flock to come down with bird fly...

He flew across the ocean, so he can't have the flu...

3 Truly a most excellent example of the breed. Must be karmic payoff for all the OT!

4 Sweet! I'm glad you finally got your hands on a Tolo. They're rather neat-looking, aren't they?

5 Nice! Are there some other european artifacts you'd like to have?