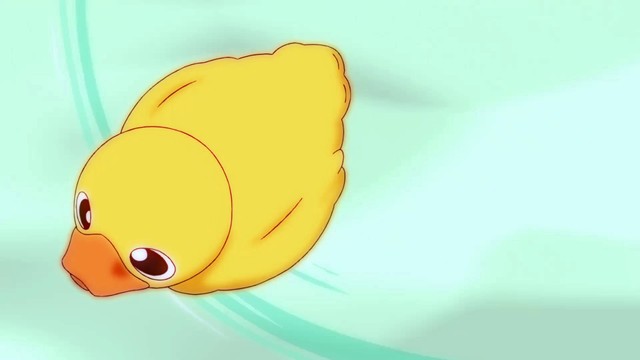 Some three years ago, the series Hidamari Sketch debuted on Japanese satellite station BS-i.  The show followed the lives of four students, Yuno, Miyako, Sae and Hiro, all of whom are attending Yamabuki Art High School.  As a prototypical "slice-of-life" show, there's not much in the way of plot other than that of going through life with your friends.  In the third series, Hidamari Sketch Hoshimittsu,  two new characters, Nazuna and Nori, joined the cast and quickly became part of the family.

Ever since the first episode there has been another member of the group.  Yuno's rubber duckie has appeared in all but two or three episodes in the series' 44-episode run.  HidaDuck has no lines, and doesn't quack even once, but a careful watcher of the show will realize just how important it is to the main character, Yuno.  When she moves into the Hidamari Apartments, the first thing that she unpacks is HidaDuck.  At one point, she's locked out of her apartment for five days.  When she finally gets back in, she immediately apologizes to HidaDuck for leaving it alone in the dark for so long.  I've said in the past that Yuno is "one of us," a collector who truly understands the joy of ducks.

But why is HidaDuck so special?  To be sure, it's a cute rubber duckie, but no cuter than quite a few of the members of my Flock.  It's particularly well-detailed, with distinct feathers on the wingtips and tail, but that's actually becoming more and more the norm amongst full-sized duckies these days.  That it floats, and floats well, is a nice feature but again, not one that's particularly different (though sadly, quite a few rubber duckies these days float poorly or not at all). 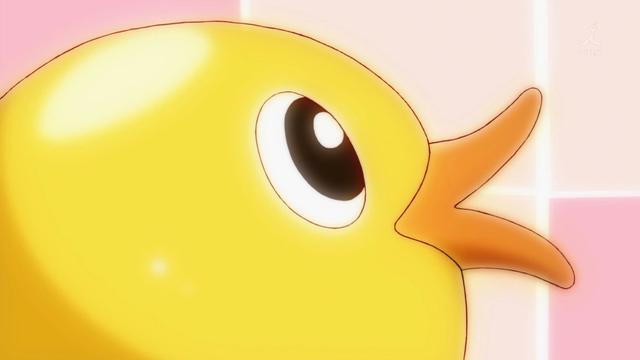 There are some aspects of HidaDuck that are uncommon, however.  The eyes are quite large, bigger than those of most of the ducks in my collection.  The opened bill isn't as common as one might think, particularly when you realize that the two halves are long and unsupported (almost all of my duckies with an open bill have much shorter halves at a shallower angle, and a "tongue" in-between).  That's a good look for a duckie.

But all of that is nothing more than an attempt to quantify something unquantifiable, namely the appeal of Yuno's Duckie.  Perhaps it's the fact that SHAFT has put so much care into making it consistent from episode to episode (though there was one time that they failed miserably).  It seems pretty clear to me that they must be drawing from a real, physical, rubber duckie as a model.  Maybe it's that Yuno obviously gets a lot of enjoyment from HidaDuck; she certainly talks to it as if it's listening, after all.  Maybe it's because it's far and away the most visible rubber duckie in anime, and perhaps on all of television, Ernie's not withstanding. 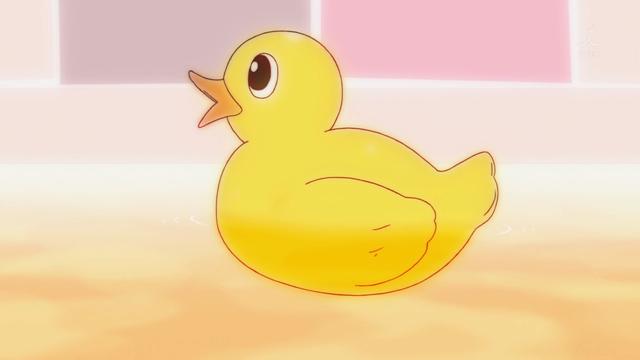 Or perhaps it's just that HidaDuck is a cute duckie.  Really, what more reason does one need?  A cute duckie is enough on it's own.
I'll admit that I tried to e-mail SHAFT to inquire about the availability of a HidaDuck, but I can't find an address on their webpage to do so.  I refuse to give up, though.

Now that the formalities are past I actually have a minor quibble on one point.  If the cute duckie is a yandere duckie then the cuteness itself is insufficient.

note that this duck was modified for a science project. The actual production rubber duck has no sensor.

2 So what makes the hidaduck is its inherent "duckiness" (as opposed to "duckness" - cf. http://dialecticonline.wordpress.com/autumnwinter-issue-no-1/what-makes-a-duck-metaphysical-realism-and-nominalism/ ).  The exaggerated eyes and mouth of the hidaduck make it close to a Platonic ideal of duckiness - making the other members of the flock shadows on the cave wall.

Or, like you said, perhaps it's just that Hidaduck is a cute duckie.