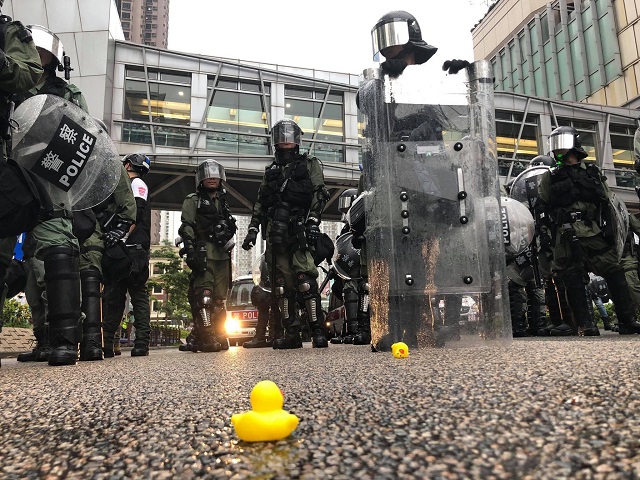 I want nothing more than to make a joke like "the protesters can't lose, they've got the rubber ducks", but the situation is on too much of a knife's edge.  Not that I'm any expert on China internal politics... in fact, those rubber ducks up there know more about it than me... but I'm of the opinion that a Tienanmen event is only being held at bay by the impossibility of keeping it from foreign eyes.
If ducks help, nothing could be better.

Given that in 1989, the Commies were completely willing to send tanks and mechanized infantry rolling over the demonstrators while in full view of hordes of foreign reporters and cameras filming from hotels, I seriously doubt foreign eyes is the reason Tiananmen 2 is being delayed.

I mentioned to a relative last week that the last time a hostile army marched into Hong Kong was when the Imperial Japanese Army invaded in December, 1941.  Given the reports that the protestors are taking down the pylons upon which the CCTV cameras are mounted to, I think the people of Hong Kong suspect it will not be long before the tanks will be rolling into the New Territories.

HE DID IT!!! Everybody, head over to Brickmuppet's place... Old Dominion University FINALLY ran out of hoops to make him jump through.

Do you know what this means?

BRICKMUPPET HAS FINALLY GRADUATED FROM COLLEGE!

There have been times during his 30-year odyssey that it's seemed like they've been inventing reasons he couldn't be given his degree, but finally... FINALLY... they ran out of stupid excuses.
Congratulations, Brickmuppet!  You persevered in the face of abject stupidity to get that which you've so desperately wanted for so long... which kinda feels like a metaphor for life in these here times.
Bravo.

2 You couldn't pay me enough to go back and finish my four year degree.

The Kraken Is Displeased I had something else in mind for a post today, but then I saw this:
...and suddenly I changed my mind.  If the video continues to not work, click right here!
I quite enjoyed my time in the original Kerbal Space Program, but it was created by people who didn't actually know how to code.  As a result, its an big unoptimized mess of spaghetticode that nobody currently working on the game knows... partly because most of the people who did the original are no longer part of Squad due to some very unfortunate circumstances.  Every patch and every update made the mess just that much larger, reportedly causing new bugs every time old ones were repaired.
KSP 2 is being rewritten from the ground up by professional game developers.  This can be both a blessing and a curse, of course.  Part of the thing that made original KSP great was the passion the creators had for it... they liked blowing up their LGMs as much as the fans did.  The new people involved won't have that same "spark", so to speak, but... well, y'know.  I'm looking forward to seeing a LOT more.
Oh, and unless I miss my guess, at both the 1:32 and the 1:42 timemarks, we get to see friggin' ORIONS.  Finally I get to build me a Michael of my very own!!!  Bring on the Fthtp!
Lastly, at the very end, there's a "thank you" message to someone named Shaun Esau with the hashtag "Build Fly Dream".  Here's what that refers to:
A lot of the beats from this video, one of the best "fan trailers" for the game out there, get repeated in the new trailer.  It's a nice touch, one that shows that at least the new marketing department "gets it."
I'm enthused.

1 I don't know when I'll have time to play it, but I'm going to buy it day one.  Maybe not pre-order, but day one.

2 Fixed your video embed for you - the editor decided to replace the space you put in with a Unicode non-breaking space, and YouTube choked on that.


That's happened to me before but I hadn't figured out exactly what it was doing.  Now that I know I can fix it.

3 Excellent, thank you Pixy!  I just assumed Youtube was blocking embedding for whatever reason.

4 I didn't get very far in KSP. I'll probably give the new one a spin, at the very least.
Lithobraking. *snerk*

5 Spinning is common in KSP, yeah... and it often results in lithobraking.

6 I bought it a long time ago. But I never got too far in playing it. Each time I got through the tutorial I just kept messing around in it. And then other things consumed my time.
But this looks good.

Automated Night "Rail" The Yurikamome Line from Shimbashi to Toyosu isn't technically a rail line since... well... no rails!  It's rolling stock is all rubber-tired people movers running on concrete "tracks".  And it's 100% automated, all computer-controlled.
No real reason to post this, honestly.  It's just pretty watching the lights and sites of Tokyo, Odaiba, and oh, Tokyo Big Sight is the 11th stop.  And it almost makes me feel like I'm a functioning human being.  Duck.  Whatever.

1 ...and if you listen closely, you'll hear some familiar voices.

3 I rode Yurikamome in 2007 when I visited the Tokyo Anime Fair at Big Sight with my daughter. I found that its representation in Dai-Guard was quite faithful, although of course it has completed its transition from a commuter line to a tourist hauler by the time.

4 We just got our first fully automated transport line here in Sydney.  It's, um, having a few teething problems.

5 Pixy, does that mean it's eating passengers?