The Peaceful Visage Of Head Trauma

1 Thank you, I needed that.  I'm literally on the edge of falling out of my chair laughing.

2 I have to admire the effort and diligence that went into making basically one gag work over the course of two several-minute videos. Sketch comedy at its... well, "finest" may not be the word I'm going for, but something-est.

3 I had seen the volleyball one first, the soccer viddy a few weeks later, though that's not the order they were released.  I think Soccer is the more successful of the two: Sterling has more character in that one.  In Volleyball, he's too quickly out of it.

Don't get me wrong, it's still hilarious, but there's a teeny bit of sympathy involved with Soccer that isn't there for Volleyball.

4 Favorite version of the volleyball is this: the first time I saw it, tagged as "Spectacular Volleyball Blocks!" it took a moment to recognize the parody.
They do good work.

5 I couldn't get through the first video. There wasn't anything funny about it. I'm astounded that the coach kept sending him out when he was clearly injured; don't they have a second-string goal keeper they could put in?

6 I'm assuming that it was entirely a gag, and that it didn't really happen that way.  The fact that he shows up in the volleyball video in his soccer uniform is a hint, as is when his coach drags him off the field by yanking on an arm, and then he's back in the net seconds later.  But it's the commentary from the announcers that had me in tears.

7 Steven, Studio C is a comedy group from Brigham Young University, and they're the folks behind the Scott Sterling videos.

"Wait, BYU?" I hear you ask, and I've gotta say "yup, BYU."  North Carolina doesn't have a men's volleyball team.  Neither does Yale. However, the Elis have one thing in common with BYU: team colors.

Anyway, this is a parody, not real events.

Unless, of course, you're making a funny, in which case, yup, ya got me.

48 On this day in 1348, the Order of the Garter, the first English order of knighthood, was created.  The word hillbilly was used in print for the first time today in 1900.  On this day in 1945, the Soviet Army entered the outskirts of Berlin proper.  Ken Johnson of the Houston Astros threw a no-hitter against the Reds on this day in 1964... and lost 1-0, becoming the first pitcher ever to lose a no-hitter.  Sergei Prokofiev was born this day in 1891.  Today in 1899 saw Minoru Shirota, the creator of Yakult, probiotic drink company and owner of the Tokyo Yakult Swallows baseball team.  The debut album by The Ramones was released today in 1976.  Timothy McVeigh was born in 1968 on this day.

And on the North Side of Chicago in 1968, in a hospital somewhere in the vicinity of Wrigley Field (which hosted its first baseball game on April 23, 1914, under the name Weeghman Park), unto this unsuspecting world was inflicted a Wonderduck.

As always, nobody is more surprised than myself.

(Belated because apparently Feedly is a slowpoke.)

6 You are younger than me. Therefore, you cannot be "old." Happy birthday.

7 I wonder what the oldest known precise calendar-related fact is.

8 Herodotus mentions an eclipse which can be dated to occurring on May 28, 585 BCE.

These Cubs... They're Pretty Good. So the Chicago Cubs played the Cincinnati Reds tonight.  They won 16 - 0.  Their young third baseman, Kris Bryant, had four hits, two home runs (one of which was a grand slam), and six RBIs.  That's pretty good, but not quite good enough for tonight's headline. 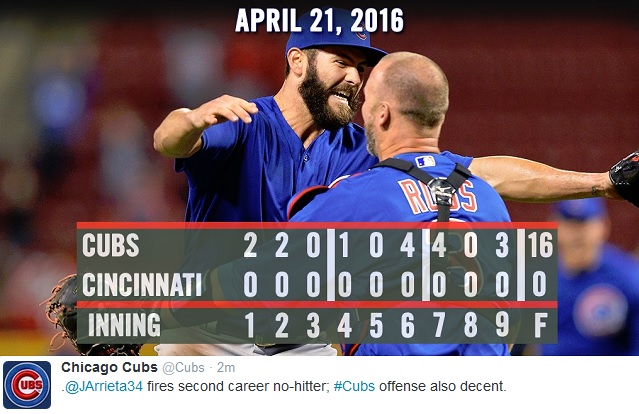 Yup, Jake Arrieta threw his second no-hitter.  Which sounds impressive, but it gets better when you realize it was his second no-hitter in his past 11 regular season starts.  He's lost once in his past 23 regular season starts... and in that one loss, the other starting pitcher, Cole Hamels, threw a no-hitter.  The Cubs are now 12-4 on the season, which is the best record in baseball.

I'll give the Reds credit... you gotta admire their sense of humor: 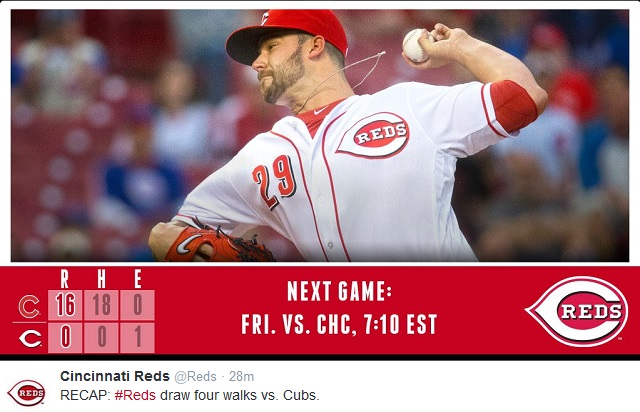 I'm actually really scared of this Cubs team... there's a lot of season left to go, but they're clearly good enough to get into the World Series.  After a lifetime of watching them fail, that's terrifying!

1 You know they're just setting you up for a fall, don't you? You've been a Cubs fan all these years, and you permit yourself to feel a bit of hope? For the Cubs?

2 You haven't seen this team, Steven.

They may not win the World Series, because baseball isn't like football or basketball, where the best team is almost always guaranteed to win, but they really are Just That Good.

And yes, I'm saying that as a life-long battered Cubs fan.  I'm also a long-time baseball fan, and I've seen great teams before... and these guys don't look like them: the Cubs look better.

The biggest weakness the Cubs have is at catcher... their main guy, Miguel Montero, is really quite good, but probably can't play 130 games behind the plate anymore.  The plan was that he'd catch maybe 100, Old Man David Ross (tonight's catcher) maybe 40, and youngster Kyle Schwarber 20-ish.

Except Schwarber is out for the season after tearing two ligaments in his knee, and the team doesn't really have anybody to bring up from the minors.

And that's it, that's the weakness.  Now, of course, injuries can happen.  A couple of starting pitchers blowing out their arms and the season could go down the tubes in a flash.  But that's baseball, and I'm not worried about it.

These guys are GOOD.

3 I remember that Hamels no-hitter.  It was right before he got traded last year.  The A.L. Cy Young winner pitched last night, too.  He didn't do nearly as well.

4 Anything can happen in baseball.

Internet Fail My internet connection has been seriously flaky for most of the past 24 hours.  This is the first time it's been up since I got home from work, so I wanted to warn you that there may not be a "F1 on TV" this week, and if there is, it'll be Thursday (hopefully). 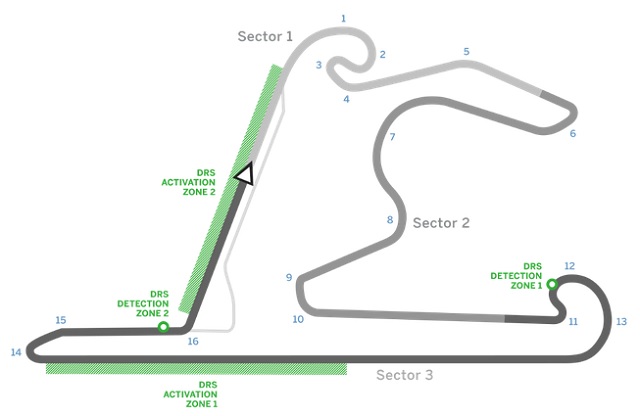 The race is in China, with Practice 2 being broadcast at like 1am Friday morning, so set your DVRs now!  See you when I've got something more stable than a pile of pick-up-stix stacked endwise!

2 According to the rental office, Corporate has some techs here doing "upgrades".  God help us.

The Cubs Know What We Want 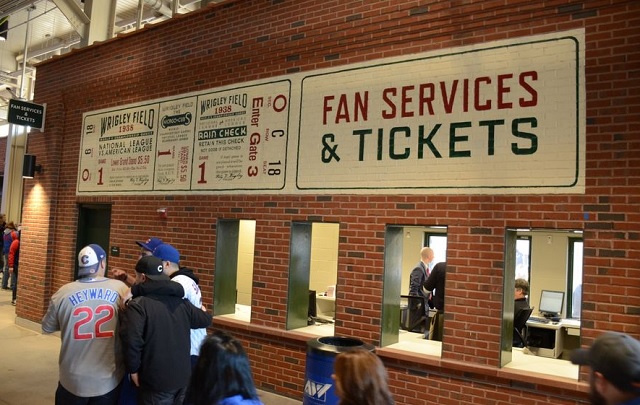 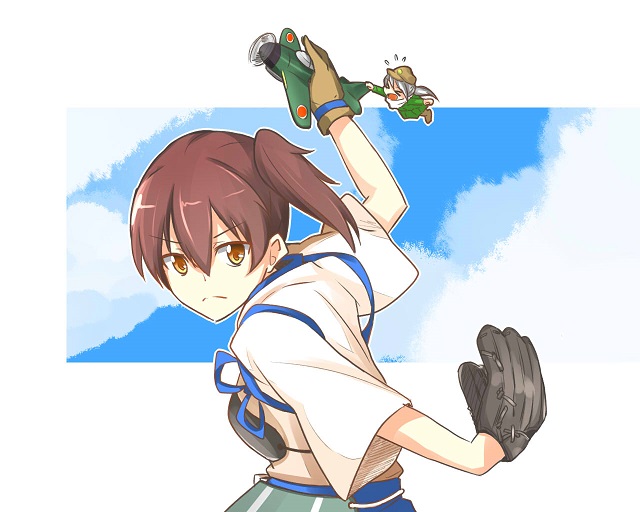 I always thought Kaga would be a good pitcher... she's always throwin' zeroes!

1 Now I wonder a bit how many people giggle as they see that "fan services" sign...

3 I wonder how many people try to correct the grammar by slapping a piece of white paper over the last "S".

Words Of Wisdom Once upon a time, a very wise person indeed told me "if you don't have anything nice to say, don't say anything at all."

While this has stopped me in the past but rarely, I'm too damn tired right now.

1 Have you watched "Aria the Avvenire" yet? How was it?

I can never finish, because I just wind up gushing over it.  If you're a fan of the Aria franchise, it's wonderful.  They got it right.