JCP is DEAD to me. THIS... this is just frickin' EVIL.  EVIL.  With a capital "EVIL."  Foul, nasty, dark, scummy, defiler of dreams, JC Pennys will never, EVER get my money again.
I HATE whomever created this monstrosity, this vile pile of filth, with the heat of a thousand suns.  Rabid, hungry stoats down his pants is not even close to being enough pain to recompense what he has done to the memories of my youth.

1 You're not the intended audience for that ad.

2 I care not. By raping one of the few good memories of my youth, they've created a fearsome foe.

So apparently you can buy pot at JC Pennys? Granted, it's been a long time since I've seen the movie, but I seem to remember the characters getting stoned before the dance scene.

4 If <i>the Breakfast Club</i> was one of the few good memories of your youth... you need a better youth.

5 If The Breakfast Club was one of the few good memories of your youth... you need a better youth.

Yes.  And?  Do you think that, maybe, possibly, that could be the very reason that I said that?

6 It's never too late to have a happy childhood!

Smaller, Better, Faster, Stronger It hasn't all been Wonderduck hiding under the covers recently.  On Saturday, I ventured forth to the BigBlueBox on a mission... a mission to upgrade Chiyo-chan.

Don't get me wrong, Chiyo-chan is still the smartest and fastest computer on the block, and with her new 19" LCD monitor, the prettiest too.  However, it's been two years since her last upgrade (420w PSU, 7600GT graphics card), and I've been meaning to do this particular upgrade since the day I got her.

So now, Chiyo-chan has all her DIMM slots filled, and a total of 3gb of RAM.  She's a lot peppier than she was (and she was pretty zippy then), lemme tell ya.

Next step, a new external hard-drive...

1 Glad to see you're feeling better....or at least peppier.

There's never been a better time to buy disk drives - the value for money is amazing.  Even the top-end 1TB drives are cheap now.  I just bought two Western Digital 640GB drives myself, so I can backup my fansub collection.

(Do not want a repeat of the disaster I had last year!)

It's a wonderful world.

I just snagged one of Maxtor's 500GB externals for $99 at the BigBlueBox. It's nice except that you could use the front panel activity light as a spotlight in a midnight blizzard if you wanted. I may need to move it to the computer that isn't in the bedroom or I'll never get any sleep.

Abusive Ducks I'm still in something of a dark place, but I couldn't not do this.  The good folks over at B3ta are currently running an image contest entitled "Abusive Ducks."  I took the liberty of stealing the best of them, so y'all could have a laugh. 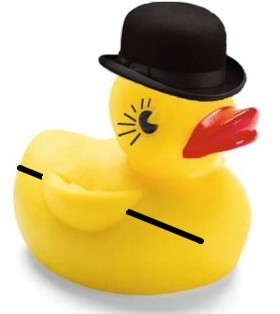 Duck a la Orange, of course...

1 Speaking of ducks in anime, there's one in here.

Where's Wonderduck? 1) Playing Clannad.
2) Dealing with a bout of depression.
3) There is no number 3. 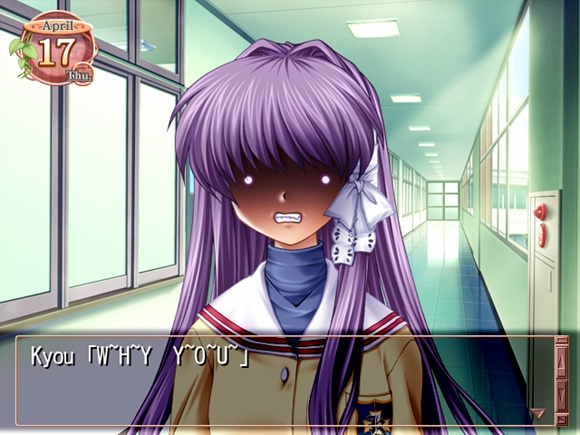 Fun With Weather! So Thursday night's weather here at The Pond was... oh, let's call it exciting, shall we?  Around 6pm, it went from being bright and sunny in Pond Central's living room to dark and surly, like someone threw a switch on the sun.

I opened the door to the balcony, and got hit in the face with a bucket of water.  It was POURING out there, and the clouds were moving every which way... but just a few miles away, there was blue sky.  A very definite cloudline... and I was on the wrong side of it.

Lots of lightning, both the traditional air-to-ground ZOT! (for a genuine Pond No-Prize, what comic strip used to use that descriptor?) type and the kind that makes it look like the Mothership from Close Encounters of the Third Kind is hiding behind the clouds.  Very neat, very cool...  and more than a little terrifying, to be honest.  Anyway, I've heard that some parts of Duckford got up to three inches of rain in a couple of hours... just what we need after the flooding of a couple of weeks ago.

Somewhere around 815pm, I noticed something weird... the light from outside seemed to be orange through the curtains.  I stepped outside, and saw that the stormline had just as neatly organized back to it as it did a front... the sun had been revealed!  Since it was almost time for it to set, though, it looked orange, and that color was being reflected off the clouds.  Very weird look to everything... and then I saw it.

A horizon-to-horizon, sharp-edged, DOUBLE RAINBOW!  I'd never seen such a thing before... and particularly not one that looked like it had been drawn with a marker!  I went out to The Pond's parking lot to get a better view of the whole thing...

...meanwhile, The Librarian was in Wal-Mart's parking lot, frantically calling my cellphone to tell me to look out my balcony to see the doublerainbowitsgreatandhugeandwow!

More importantly, though, she had the presence of mind to take a photograph of it with her cellphone's camera: 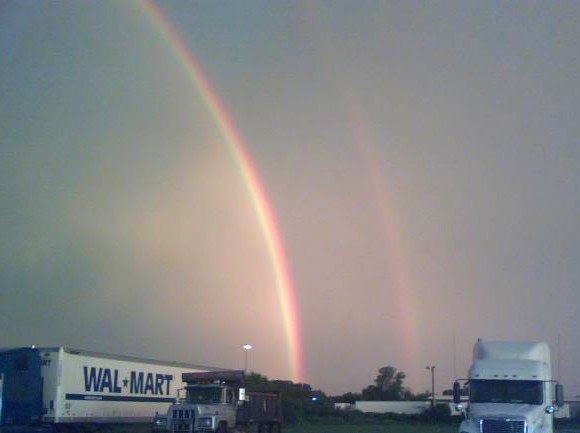 They're after me Lucky Charms!  Both of 'em!
So, not a bad way to end a stormy day, eh?

I wonder if those tags work for you.

2 As dry as everyone thinks it is in Arizona, we get quite a few of those full double-arcs. If not for the dust clouds that often proceed the thunderstorms, we'd probably see even more.

3 I've only seen a full double rainbow once in my life. It was in Maine, when I was on vacation at a resort near Acadia National Park.

4 It's been a long time since I've seen any rainbow at all; maybe even before Pond Central moved to its current location (going on eight years now), so having this one show up was quite special.  I'm just glad that The Librarian was able to get a picture... AND send it to me... AND let me post it.

She's great, she is.