Five Words You Never Want To Hear... ...during the Summer in the Midwest: "Boy, the sky looks weird." 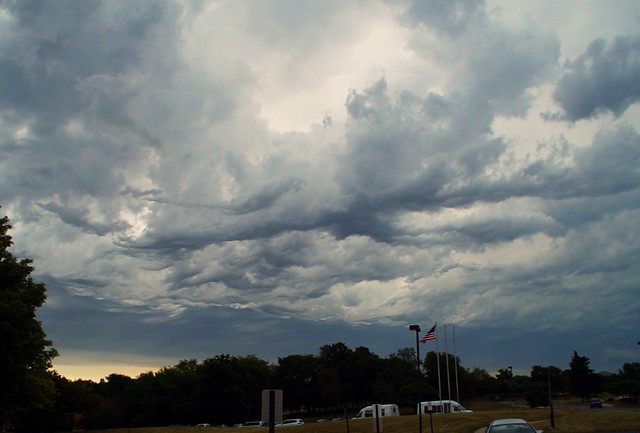 This was what I saw when I went outside after a customer said the above five words.  A few minutes later the skies opened up like Noah had been building an ark down the street.  Fortunately, that was ALL that happened... I was expecting funnel clouds, a hail of frogs, a hail of hail, an Elder God to crawl up out of the ground, that sort of thing.

What you can't see in these pictures is the rolling at the forward edge.  Yeesh.  I nigh on wet myself with fear.  The Midwest: don't like the weather?  Just wait a few minutes, it'll change.

1 It rolled through fast, but it did enough damage to the fairgrounds at Wright-Patterson AFB that the Air Force Tattoo was cancelled. Wind speeds of 82 mph were recorded in the area.

2 I think what you saw is known as a "derecho".

3 That same storm caused power-fluctuations for me last night in Arlington VA, but luckily I got my electronic gear turned off quickly.  It was almost constant lightning for almost an hour, along with high winds and rain.

4 Does your bookstore have a basement?

5 Steven, even better: half the store is actually underground, including the entire back room, where my desk is.  It's built into the side of a hill, y'see.  While the building we're in does have an official tornado evac site, which is essentially a basement area, it's on the far side of the building from us.  The evac route takes us past some awfully exposed windows.  In a short notice emergency, it's probably safer for us to hunker down in our back room.

While the building we're in does have an official tornado evac site, which is essentially a basement area, it's on the far side of the building from us.

I sorta expected a sliding panel behind your desk that led to the secret underground Wonderduck super-villain lair.  Especially since you said that the building is built into the side of a hill...

Critical Internet Fail Everything is loading but slowly.  Very slowly.  Glaciers move faster.  The "Help Desk" tells me that my internet connection is limited.  No, you don't say?  Really?

Blogging will resume... eventually.  I think.  No idea when.  You don't wanna know how long it took to load in the "Create Post" screen.

1 Jerkoff ISP nuking you for torrenting?  Mine has figured out how to limit torrents to 60K while letting everything else through.  Although sometimes they relent.

2 No, it's a FAIL for the entire apartment complex.  There was a power outage a couple of days ago that did something very bad to the network; they've been diddlin' with it since.

3 Is it really an Internet outage, or are you just too preoccupied with a military exercise to post...

Still Creepy? I've been informed that the second picture was even worse than the first.  I deeply and humbly apologize.  Let me fix that. 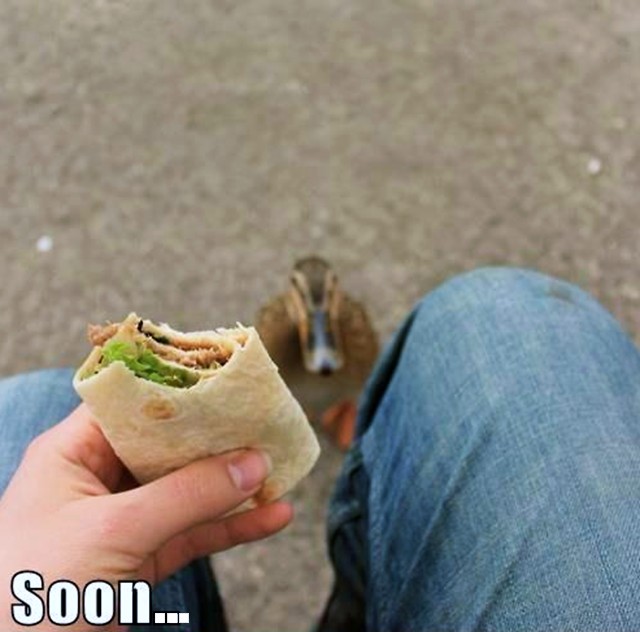 2 I've never had any of the ducks around here come that close to me. (Of course, they all know about my Anti-Duck Blastoray.)

I'm going to be moving to a more rural area in a month, and will be less protected.  Can you tell me where to get an Anti-Duck Blastoray of my own?

I heard Acme Mail Order sells it.  Installation is not included, and curiously, the warranty has been torn to shreds.  Initial analysis indicates impressions left by a paw (coyote) and marks associated with the genus Geococcyx.

5 So, like, you don't have another secret identity who does that webcomic Quacked Panes, do you?

(Actually the guy's son does Friendship Is Dragons, so I was pretty sure it wasn't you. But the resemblance was eeeeerie.)

I don't know, this duck conspiracy thing is sounding more plausible all the time.

I don't know, this duck conspiracy thing is sounding more plausible all the time.

Wonderduck has let slip the existence of a corps of cyber-enhanced reconnaisance ducks.  There is supposedly at least a squad assigned to maintain surveillance of Chizumatic HQ at all times.  So far, they only seem to be watching...

8 Maureen, I'm proud to call friend GrayDuck my brother-in-feathers, but we are neither related or the same duck.

9 Of course, if he was, wouldn't he say the same thing?

10 USE THE FRIGGIN' LINK BUTTON.

11 Well, for one thing, this duck's a few time zones to the west. (Relatively speaking, Steven Den Beste and I are neighbors.)

Also: One of these days I'll need to address the ducks versus ponies issue in my family.

A Public Service from your friends at The Pond It has been brought to my attention that the owl in the preceding post is, and I quote here, "creepy."  Well, far be it for your friends at The Pond to be creepy in any way, shape or form, heavens no!  We hate creepy in all its myriad forms and guises.  To the last, Creepy, I will grapple with thee... from Hell's heart, I stab at thee!  For hate's sake, I spit my last breath at thee, Creepy!  And I replace thee with another picture. 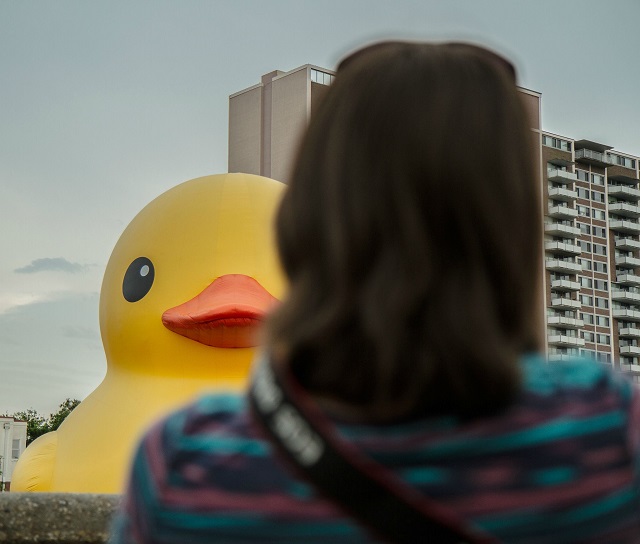 Thank you for your continued patience.

1 This is even worse, sorry to say.

2 In Wonderduck's kitchen, the condiments eat you!

3 This is even worse, sorry to say.

vonKrag, this is for you.

This episode is harder than all the previous ones combined... too much talkytalk, not enough zombie.  Workin' on it.

T-Bird Saturday So I'm sitting around Pond Central, pointedly not accomplishing anything, when I hear a haunting moan from outside.  I immediately grabbed my camera and dashed to the balcony, for this is Duckford AirFest weekend, and that moan was the sound of the six F-16C (block 52) Fighting Falcons of the USAF Thunderbirds.  Minutes went by, and I realized that this was probably not going to be a good day for them to overfly Pond Central: the wind was all wrong.  My guess turned out to be correct; the route they took to clear the airfield wound up being to the south, instead of directly overhead.  Which didn't mean that they didn't surprise me once.  See, one of the problems with jet fighters is that from the front, they're actually quite quiet.  They don't get loud until they're heading away from you and those big honkin' engines (F-110-PW-229, in this case) are staring you in the face.  So when the Diamond blew past Pond Central just east of me, I didn't expect it... and then they curved around to the south at high speed, passing by a gap in the trees in about a millionth of a second (or so it felt).  I raised my camera and pressed the shutter button... and hoped I got the shot. 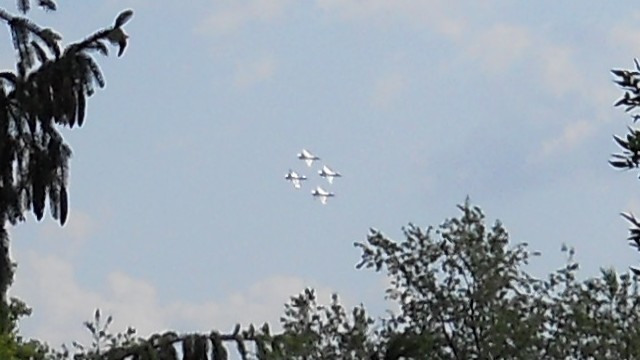 Sometimes you get lucky.  Here's what the full picture looked like: 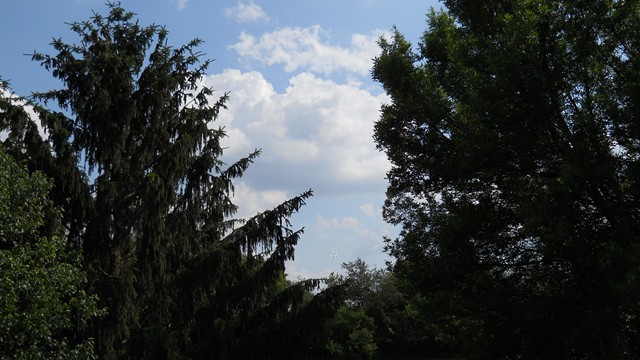 Click on the pic to see it in full 3968x2232 resolution... and see just how lucky I got.  The forecast for tomorrow isn't swell... though if it gets better, I might just head out, see what I can snap.

Or, in my case, progressive lenses.  Three distinct zones: far away, not far away, and reading.  Computer screen falls into the "not far away" category, but only barely.  It's like looking at the world through a fishbowl.

I suppose I shouldn't be surprised.  My last eye checkup was over six years ago, and I've noticed a distinct amount of fuzziness around objects for the past half-year or so.  So I hied myself over to LensCrafters on Wednesday for a trip to the OptyDoc.  She said "your left eye hasn't gotten any worse.  The astigmatism in your right eye has, however."  Just how much worse?  One full diopter's worse.  The technicians told me that I now have four times as much vision correction in that lens as I did.  However, I was right on the edge of needing bifocals.  My vanity, of course, said "nope, no bifocals for me!"  And out the door I went with my new glasses.

...and immediately realized two things.  1) everything seemed farther away, and B) everything was sharper and clearer.  Neat!  And then I misjudged the distance to a curb and sprained my ankle when I stepped off a stride earlier than I expected.  I went through all of Thursday with the glasses, and noticed that I was having problems seeing mid-range things... like computer screens, or the dashboard of the DuckMobile.  I figured it was just a case of my eyes adjusting.

This morning, I realized it wasn't an adjustment thing, I needed something bigger than that.  So back I went to LensCrafters this afternoon, where they took more of my money and gave me back a new set of progressive lenses... and boy, is it gonna take time to get used to these.  On the way home, I stopped at Walgreens and realized that I was... nodding... as I'm looking at the shampoo, trying to figure out what part of my lenses I needed to look through to not be blurry.  And walking through the aisles.  And being rung up.  And in my car.  I feel like one of those drinking birds.

But at least I can see, right?

1 Welcome to the club!  I got mine a couple years ago.  In my case, I need to tilt my head back to read my computer screen, but everything else seems to be at the normal viewing angle.

2 I just got back from a "grocery" run (some soda, both for Pond Central and for work, some Gatoraid, again for both places, mouthwash), and halfway through I felt nauseous.  I closed my eyes for a second and it went away.  Kept looking through the wrong part of the lens, then adjusting to the right part, with a noticeable "swimming" effect.

I haven't even had them 24 hours yet, so I'm hardly concerned, but that was unpleasant.

3 I have reading glasses as well as the regular ones now, but haven't made the leap to bifocals (or multifocals) - yet.  Not so much vanity as that I tend to spend hours at one distance or the other and don't switch that often.

But when I need to read labels in the supermarket, that's a nuisance. (And I do, because I'm gluten and lactose intolerant.)

4 I'm way overdue for mine.  I HAVE the benefit, I just need to USE it.

they do make some lenses specifically for computer distances which have a larger mid-range section.