Playoffs Time! So Wednesday, October 1st, the Chicago Cubs begin the 2008 National League Playoffs against the LA Dodgers.  In a year where the Cubs were pretty clearly the best team in the National League, this looks like their best chance ever to go to the World Series (knock on wood).

In tribute, I bring you what is probably the best 'baseball song' of all time.  Ladies and Gentlemen, may I present Steve Goodman's "A Dying Cubs Fan's Last Request":
It appears likely that this clip was shot in 1984, the last time the Cubs were really favored to go to the World Series (knock on wood), and performed on a rooftop just outside the left field bleachers (Waveland Avenue, as mentioned in the song).

The song is particularly poignant when you realize that Steve Goodman, writer of such tunes as "City of New Orleans" (made famous by Arlo Guthrie), "You Never Even Call Me By My Name," and "Go Cubs Go" (sung after every Cubs victory at Wrigley), was dying of leukemia in 1984.  He passed away four days before the Cubs clinched their first ever NL East pennant (back then, there were only two divisions, East and West), and was to sing the National Anthem at the first playoff game at Wrigley Field since 1945.

It's not just a good baseball song, but a good song in general.  Sure, it helps if you're a Cubs fan (who else would know who Keith Moreland is, and why he should "drop a routine fly"?), but if you've ever lived and died with a sports team, you'll hear something that resonates with you in "A Dying Cubs Fan's Last Request."

That is really awesome, and it's sad to know that he was dying when he sang it.

2 And the Cubbies crushed the hearts of their fans once again, getting creamed in their first post-season game. 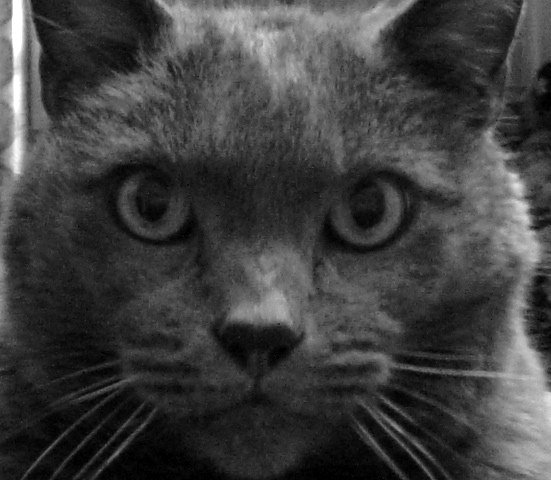 For fifteen years, Rumpole was the greatest cat ever.  He wasn't the smartest of cats, and there's no way anybody who saw him try to jump on the couch would call him graceful, but he was everything you'd want in a cat.  Affectionate, playful, funny, and almost never grumpy.  Essentially, he was my cat.  When I went to visit Momzerduck and Ph.Duck, he'd always come running and be waiting at the door for me.  When I was sick, say from having a tooth removed, he'd come stay with me at Pond Central for a week or two, just to help cheer me up.  He was my buddy, my pal, and a great friend.  Just a week ago, he came back from the vet, with a diagnosis of "okay, but old."  He'd lost a few pounds since his last visit, and had slowed down dramatically.

Over at Fark, someone made a LOLcat out of his picture that perfectly summed him up: 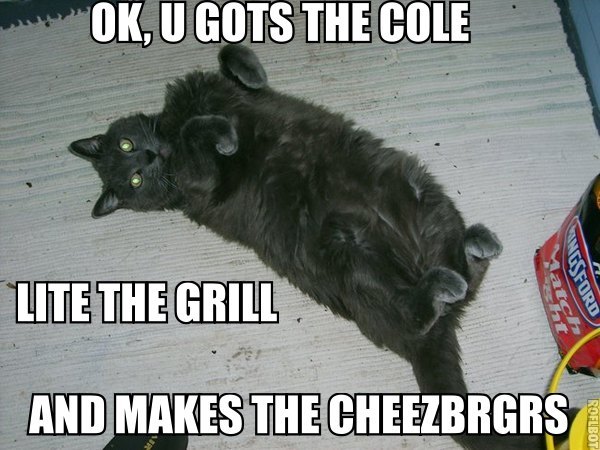 Today, we had to put Rumpole to sleep.  I can't stop crying.

Oh, I am so sorry to hear that.  Sincerest condolences on the loss of your wonderful pet.  "Pet" just doesn't seem like the right word, though, when a cat becomes a member of the family and a pal and a ray of sunshine.

He was a beautiful cat!

I'm so sorry to hear about your dearest kitteh.  Be thankful for your happy memories to get you through this difficult time.

3 WOW! I am soooo sorry to hear about your loss. It's never easy to lose a loved one. Our furry family members can be the most dear to us, and as such, so much pain is involved when they pass on. My thoughts are with you at this difficult time.

Cubs Win! Cubs Win! The Cubs are heading back to the postseason!  Not only that, but this is the first time in 100 years that they've made it in back-to-back years to boot.  AND, just to make it a little bit sweeter, they clinched today by beating the hated Cardinals, 5-4, at Wrigley.

It's a big first step, but it's just a first step... next, they've got to win the first round of the playoffs.  Then the league championship series.  THEN the World Series.

But boy, it was nice to see 'em win today! 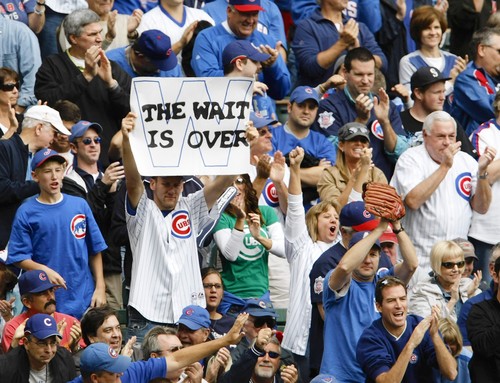 UPDATE:  The view outside Wrigley Field just after today's game: 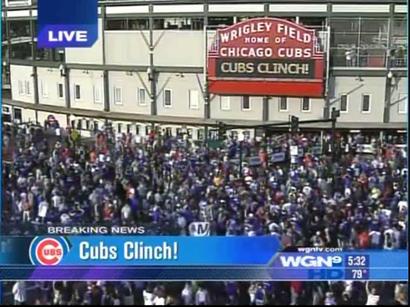 I was going to post something about "Give in to the dark side! The White Sox!" But then I looked it up, and they're American League.

So forget about that. The Designated Hitter rule is the work of the devil.

3 Root for the White Sox?  What sort of duck do you think I am?

...so here's an animated gif of Daffy Duck from the legendary cartoon "Duck Amuck," the greatest piece of animation ever.

So we're even, right?

UPDATE:
Oh, why not?  Here's the actual cartoon itself... enjoy!

1 If "Duck Amuck" was the only thing that survived humanity, it would be a fitting testament to the species. My absolute favorite cartoon.

The Shortest Trial In History It was so short that we the jury never even made it into the courtroom.  Plea bargain... we sat around in the jury room for a couple of hours twiddling our thumbs.  It appears, however, that the defendant had a poor attitude towards the legal system, as he apparently caused a little ruckus in the courtroom.  Exciting, yay.  Of course, we weren't there, but that's what the judge told us when he came in to tell us that we were free.

So, my jury duty has been discharged for at least a year, and so ends my fourth experience in the jurist pool... in 10 years.  I'm just lucky, I guess.

Really, I'm not complaining.  This country doesn't ask us for much in return for being citizens... taxes and the occasional stint on a jury.  I'm okay with that.  It's not like mandatory military service or the like.

Though the setup in Heinlein's Starship Troopers seems pretty logical to me*...

*now let us see how long it takes for the calls of "fascism" to show up.

1 Duck justice is harsh and certain...

2 That's it, we scared the defendant.  Right, that's the ticket.

3 Apparently a good number of trials end that way, many a defendant holds out until the very last moment before deciding that no, facing a jury isnt the right answer.

My funniest jury duty story is the time I get the summons, report to the criminal courts building in the morning, sit around till lunch when I walk up to the 18th floor to talk to my Dad (a D.A), then we go down to court room 109 to grab a judge that is a close family friend and go to lunch.  After lunch I get selected for a jury, and we all tramp off to court 109.  Needless to say, when the judge and the prosecuting attorney both know me by name, and I'd been out to lunch with the judge just minutes before, I did not get on that panel....

4 I've only been summoned for jury duty once. We all sat around because there was a cocaine-possession trial scheduled, and early afternoon the bailiff walked in and told us all to go home because the accused had agreed to a plea bargain. As you say, that's apparently quite common.

Those Fools Know Not What They've Done... I was empaneled for a jury.  The trial begins tomorrow morning.

What fools these mortals be. 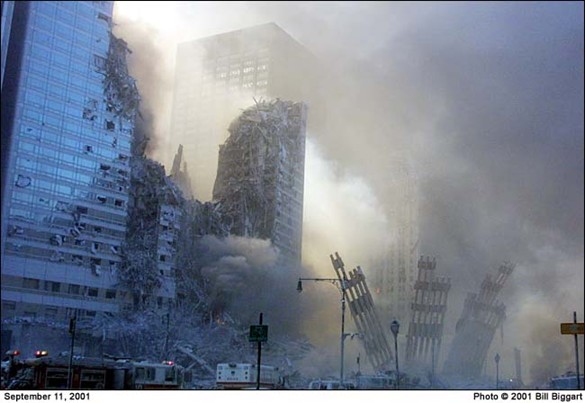 Phantom Phan! Back in 1976, when I was just a young duckling, my family moved from Chicago to Duckford.  On July 4th of that year, Momzerduck and I went downtown for the parade, and that is when I was first exposed to the wonder that is drum & bugle corps.

More specifically, I heard and saw a corps known as the Phantom Regiment, which is based in Duckford.  In fact, their offices are just down the hall from the Duck U Bookstore these days.  I've usually managed to catch their full show at least once every year since then, and with them on campus during the summer, a bunch of their practices to boot.  I never got the chance to see this year's program, "Spartacus", though.

That's a damned shame for a couple of reasons.  First, it broke my personal string of 32 years of seeing them.  Second, they were picked to be one of the teams in this year's Drum Corps International.  See, DCI is the SuperBowl of Corps competition; you take the top 10 "World Class"-level corps, and in the course of one night, all ten do their routines while judges grade their performances.  It's the Big One... and while the Regiment has tied for first once, they've never won it flat-out.  They've come in second and third a number of times, and they are probably the single most popular corps, but they've always fallen just slightly short of winning.  These days, there's almost a feeling that they'd never win one... not that they're not good enough, but, just like a batting champion getting close calls from an umpire, teams like the Santa Clara Vanguard or the Blue Devils of Concord, CA might get a break here or there... because they've won before, and the Regiment hasn't.  Now, I'm not knocking those other teams, don't get me wrong.  The Blue Devils have won 12 DCI championships, the Vanguard six.  You don't do that by being lucky.  But bigger fans of DCI than myself have said that the Regiment has deserved to win more than a few times, but haven't for one reason or another.

So this year looked like maybe more of the same.  A great program of classical music and the Regiment's usual precise staging, a killer performance, and a solid third place.  But then... something special happened:

Banner courtesy of regiment.org
I already have my championship T-Shirts, and I'm eagerly awaiting the release of the DVDs... congratulations, Phantom Regiment, and thank you for all those years of entertainment!

1 Two one-hundredths of a point, they squeaked in by? Yow!

That they beat the Blue Devils (the New York Yankees of Drum & Bugle Corps) makes it all the better.

Tales from the Duck U Bookstore So now that the new semester is in full swing and things are slowing down a tad, we actually have time to relax a little bit.  Instead of running around at full speed from the moment we walk in to the moment we close the doors, we can now do things that are not exclusively work-related... like use the bathroom, or have lunch.

Earlier today, I stepped outside for some fresh air and to admire the beautiful Duck U campus (no sarcasm there, by the way... it really is gorgeous).  So imagine my surprise when I saw THIS sitting in the middle of the Quad: 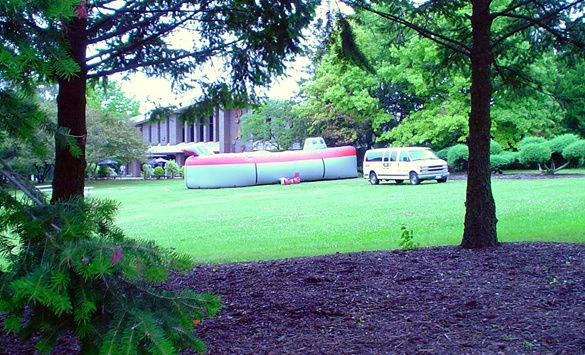 Whiskey... Tango... Foxtrot?
A... submarine?  First I had to make sure I wasn't seeing things... submarines just don't exactly appear in front of the Library at Duck U... or, in fact, in front of any of the U.'s buildings, not even the Arts Center, where weird things happen every day.

A pleasant stroll brought me closer to the thing, revealing the strangest markings for a submarine I'd ever seen: 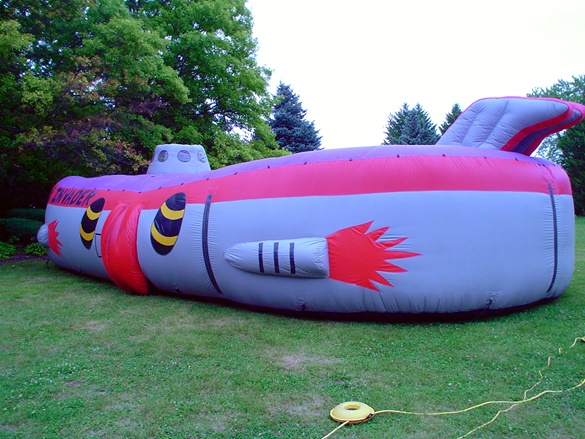 Well, the name is appropriate, at least.  But who's ever heard of rocket pods on a submarine?  Or what appears to be a face on the side?  Before I could investigate further, however, a horde of kiwis approached, and I had to get back into the Bookstore.  By the time I got back outside, the submarine had vanished as mysteriously as it had appeared.

It is a puzzlement.

1 This answers a few questions, while raising a few more.