Happy Halloween... ...from all the little ghosts, goblins, and trick-or-treaters at The Pond! 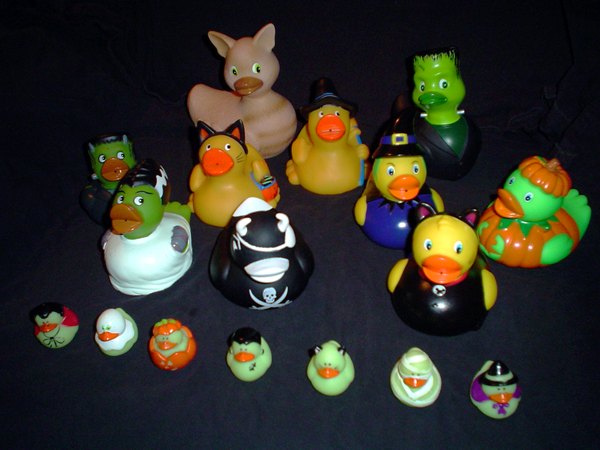 Weekend. Well, there was another 50+ hour week, come to an end... makes three in a row, and five of the last six.  That's annoyingly long, but it's even worse when you're working alone, which I am.  The Duck is worn out. 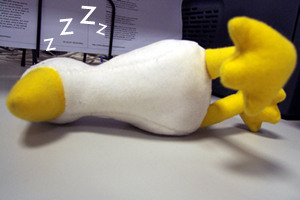 However, I've got the weekend off for the first time in a month.  I see a lot of anime in my future...the 3rd DVD of Haruhi is on my desk, and I see that there's 3rd episodes of and Minami-ke and Sketchbook available, too.

Not to mention the little surprise I'm working on for the F1 UPDATE! year in review post.

It's NICE to have an uninterrupted couple of days off.

I left this as a comment response to you over at Pixy's, but I wanted to leave it here too. I think the real reason you get lots of spam and I don't get any is that I require all commenters to be registered and logged in.

It's not really an onerous requirement on humans, but it cuts the flow of spam down to essentially nothing.

2 If it was those annoying little things that said "c15t" or whatever, I've just updated the spam filter for them.  They were getting through because they had no real links or content for the filter to catch.

It now detects them and bans the source IP on the first attempt, which should help a lot.

3 Installed the updated filter, banned all the IPs that had already spammed us, and cleaned out the spam.  So things should be a bit quieter now.

4 Oops.  Slight bug caused it to crash when it identified a spambot, which, while it did block the spam, didn't do it quite the way I intended.  Fixed that too.

(It looks like we got a burst of 100+ spams just after I installed the filter, so good timing there.)

Steven, I'm sure you're right, regarding the spam.  Until it becomes completely unbearable, however, I'll continue to have open comments.

It's My Birthday Two years ago today, the worst thing to ever happen to me occurred.  I was taken out of the Duck U. Bookstore on a gurney.  My heart had decided to go wild; a pulse rate so fast the EMTs couldn't count it, and a blood pressure so high that it was off their cuff's scale.

Imagine sprinting as fast as you can for a mile.  At the end of it, your heart would probably still be beating slower than mine was.

It's called 'superventricular tachycardia', and it's actually fairly common.  The doctors at the ER told me that they see "a couple of people" every day with much the same symptoms.  In my case, however, my blood chemistry was completely screwed up.  In particular, my potassium and magnesium levels had cratered.  According to one nurse, and I have no idea what these numbers mean, a 4.0 reading is considered normal for these particular levels.

Mine were around 1.0.  They kept me overnight, hooked me up to an IV tree and pumped bags of the stuff into me (the potassium burned).  The next day, I had a prescription for a betablocker, which I'll probably be on for the rest of my life.

It must be working, because other than a 10-minute long episode back in September 2006 that wasn't half as bad as The Incident, I've been fine.

SVT is not life-threatening for the most part.  Tony Blair, the recently retired Prime Minister of England, had an attack back in 2003.  In his case, the doctors decided to perform a procedure called catheter ablation on him... roughly a year later.  In his case, being the leader of a country and all, it made sense.  In  my case, since I'm a duck with no particular history in this sort of thing, they decided against it... but if it starts to occur frequently in the future, it's an option

Like last year, I'm going to end this post with a request.  If something weird is going on with your heart, be it SVT, chest pains, tightness, or whatever, don't be tough.  Call 9-1-1 immediately.  You don't want to mess around with stuff like that, because, quite honestly, you can DIE if you wait.

And I don't want to lose any of my readers from something I can help prevent.

Now, lets put on party hats and break out the noisemakers!

1 Congratulations on turning two. You must be the youngest F1 expert online.

That condition sounds very much like something a friend's father went through recently. His heart rate was so high it was more like a vibration than a pulse. He wasn't moving any blood. Now they've got him on a pace-maker to keep his rhythms in check.

3 Congrats to Wonderduck on his big day! I don't think I'd begun reading here at the time of your "episode"... but I think when you posted about it last year on your b-day I went back and read it in the archives. Good to have you still with us and I agree with the advice. Always good to keep a handle on the ol' ticker.

It also looks like you got a persistent spambot for your birthday.

5 I suffered from something similar when I was younger. My doctor told me that I had Wolff-Parkinson-White Syndrome; it too is a form of tachycardia, where there is a deformation of the electrical sack that allows the electrical impulses excite the ventricles before it is supposed to be excited. It first appeared when I was out in the front-yard playing football with my family. Finally, after a few more occurrences, one that lasted three hours, I went to the doctor. After an EKG showed what I had, I went to a cardiac electrophysiologist and had an RF Ablation procedure performed. I was in the OR for somewhere between four and six hours. Thankfully, however, they got both slits and I have not had a recurrence since.

However, Wonderduck, I am glad to hear that you were able to get out of your episode with few repercussions. I hope you donâ€™t have to go through anything like that again. Also, congratulations on two years.

I, too, agree with your advice. It is always best to end up in the hospital with a problem, then to be tough and end up dead.

6 Happy birthday!  Good to hear that you haven't had anymore episodes.

Oh, and I've tweaked the spam filters for you.  Need to put the adaptive filter in place; I'll look at that later today.

I think Will just said something off-color... and fortunately, a pacemaker is nowhere near my future, unless something goes horribly, horribly wrong.  I hear they pick up satellite radio these days, though, so that'd be a bonus.

And that spambot is driving me up a wall... hopefully Big Papa Pixy's fix will deal with it for me.  A better birthday gift I could not ask for.

Except, maybe, for... well, this is a family blog.

Mike, glad to have you on board...  Thanks for sticking around!

Kyle, the emdees were concerned about WPW in my case, too... but because there hasn't really been a reoccurance, they've pretty much ruled it out.  Sounds like you had a pretty ick case of it, too.  Glad you're okay, and thanks for dropping by for F1 UPDATE!s, too.

I don't wish this sort of thing on my worst enemy, but friends and readers like y'all almost make it worth it.

a pacemaker is nowhere near my future, unless something goes horribly, horribly wrong. I hear they pick up satellite radio these days, though, so that'd be a bonus.

Dude, my crazy friends tell me you get the best signals through your dental fillings anyway, so don't go for that pacemaker - it's a ripoff.

What? A guy can't write happy birthday without being accused of lowering the level of discourse around here?

Well, If I was looking to make friends and influence people, I'd say something more like...

Ladies and germs, I give you LIVING COLOUR, live on Arsenio in '89.

Vernon Reid is the man.  Crank it up!

When Life Happens All Over You.

Readers may have noticed a drop in quality posting here at The Pond in recent weeks.  To tell the truth, I hardly have time to think these days, let alone blog.

The manager of the Duck U. Bookstore has been promoted to a much larger store.  This leaves the store with one a grand total of one employee... me.  As a result, of course, I'm working open-to-close Monday thru Friday, and since it's football season, every Saturday home game as well.  Then there are the Forum Series events, where an interesting person comes to Duck U. and gives a speech/presentation/whatever to the students.  Interesting people often have written books, so the store goes to those events to sell said books... adding another 3 or 4 hours to my day.

On one hand, it's great, because of all the overtime.  On the other hand, it's really, really tough to work 12 hours/day alone, with only minimal chances to (say) go use the loo.

So if The Pond gets a little quiet for a while, that's why.  Of course, I WILL make time for the Brazil GP... and sooner or later, I'll get back to posting about anime.

It's just that right now, things like 'sleep' are more important.

Ukes for days.. or at least a few minutes.

1 Given that you post a lot about anime and such, I initially read "uke" as meaning something entirely different, which made me a little hesitant to click "play". 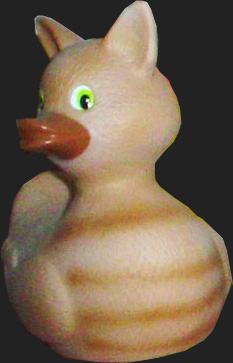 So you want a Wereduck?

Okay, I can do that!  Sorry about the quality of the picture, but you know, it's that whole "full moon, dark of night" thing.

He's a cuddly lycanduck, loveable one moment, and the next, he'll rip your head off and quack down your neck.  And he's just one of the 185 ducks in my family.