Smile For The Camera! About a week ago, I asked y'all for recommendations about a digital camera.  Well, I've made my purchase, and the winner is the Nikon Coolpix L22, in red so it matches my cellphone (note: while it does match my cellphone, that's not the reason I got it in red.  They didn't have black in stock).  It's not quite as hands-on as I'd prefer, but it was about $60 less than one that let me set the shutter speed manually.  I can live without that feature for $60, and I suspect that once I get into the users guide, I'll find there's plenty I'll be able to fiddle with. 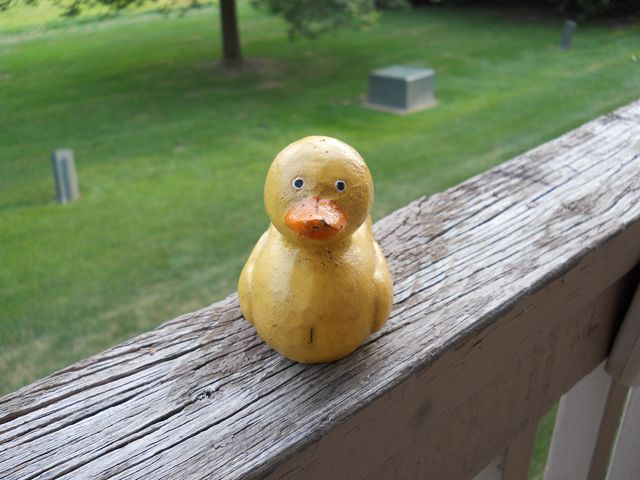 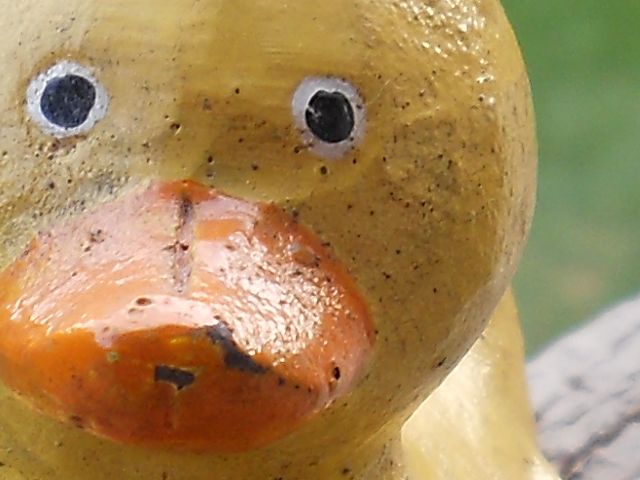 If ever there was a picture that let you know that Rusty II isn't your normal yellow duckie, this is it.  He's actually cast iron, weighs maybe 1.5 pounds, and you can see the little pits and dimples that occurred when he was cast.

Oh, and that's at normal zoom from about three two feet away, under overcast skies.  Like all point-and-shoot cameras I've ever used, it has a problem focusing on on something that's much closer. (...but see the UPDATE below!) 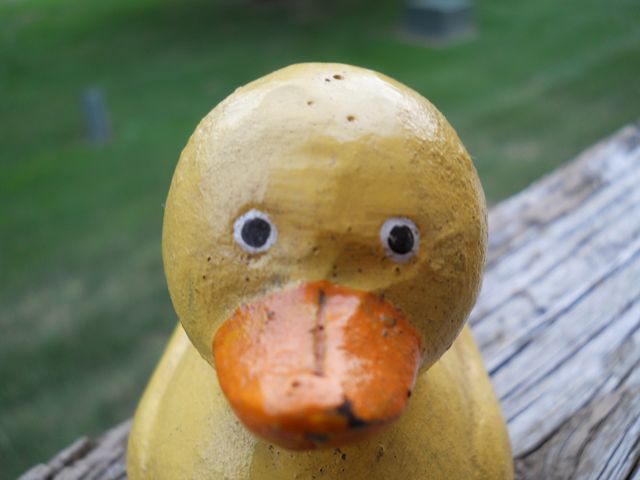 That's from about half a foot away, more or less.  Now here's the 640x480 crop from the full-resolution pic: 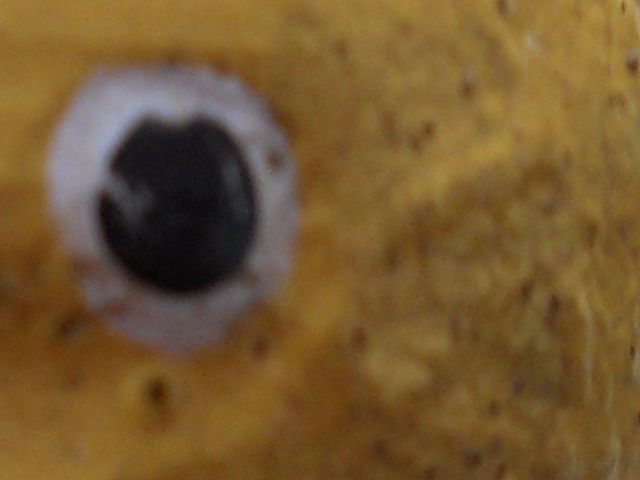 Yes, that's his left eye.  I probably won't be getting THAT close very often... kinda creepy, actually.
2) My media card reader may not be able to deal with a 4GB SD card.  Whoops.

2 I first heard about macro zoom when looking for advice on how to photograph miniatures. Useful little tool...

3 Macro works best if you unzoom and then hold the camera close to the target. Ideally, the zoom/unzoom should be in the default position, the one the camera initializes to.

4 Congrats on the new purchase. I expect to see many, many, many duck pics. Heehee. Hey-are you still working at the bookstore? I may need to send you some models for photos

I'd Like Your Input I'm looking for a good, relatively inexpensive ($120 in a brick'n'mortar store, or thereabouts), digital camera.  See, all these years that I've been posting photos of my duckies, I've been using either the Duck U. Bookstore's 3 megapixel Sony or Ph.Duck's 5 MP Samsung.

The thing is, I have absolutely no idea what makes a good camera anymore.  When I was working for CowPuters lo these many years ago, a 5 MP camera was the top of the line at the consumer level, and even then I knew that the ones we carried were... um... not so good.  I do know that all the megapixels in the world don't matter if the lens is crepe, and being able to zoom in on something from a mile away isn't useful if the camera can't do anything with the input.

So all you shutterheads, I need your advice!  What's a good camera for someone like me?  I've been looking at THIS one, but I really don't know if the one on the shelf right next to it is better, worse, or exactly the same... help?

1 I've had a Nikon CoolPix L11 since about this time in 2007 and I love it.  I paid a bit more than $120 for it, but that was because I was going to the Philippines and couldn't wait for a sale.

In general it's really good at taking pictures.  It uses AA batteries and it goes a good long time on a single pair.  (And I use RayOVac alkalines.)

It's a 6 MP camera.  Its low-light performance leaves just a little to be desired as it frequently wants to use the flash.

Bonus for the otaku:  it's the same camera Izumi Konata's father uses to take pictures in ep 22 of Lucky Star.

I would recommend checking out the CoolPix series of cameras before making a final decision on what to buy.  This model is good and I'm sure the subsequent models aren't pikers.

2 I've got one of the CoolPix S550s. Got it as a gift, so I didn't exactly go around doing feature comparisons, but it's what I was looking for in a camera. And yes, it likes using the flash, though I haven't ever had a problem with the battery dying on me (then again, I'm either taking a few pictures of models, or a few pictures of landscapes, so...)

Funky connection cable to the PC, though, not a standard USB. That might be something to consider. (On the other hand, it just stores the images on an SD card, so you can always pop that out and into a reader... if you have a reader, heh.)

3 6MP and up, it's pretty much the same on compact cameras - it's limited by the size of the sensor and the lens.  So pick a good brand (Sony, Canon, Nikon) that looks nice and fits in your price range.

Check DPreview too, they'll probably have at least a forum thread.  (There's about a million billion new models announced each month, though.)

In a lot of kinds of products in the early stages there can be a great deal of difference. But once things settle out, the competiting products are all pretty much the same. That's where we've gotten when it comes to point-and-shoot cameras like the one you're looking for.

I love my Nikon, but I can't claim it's better than competing Sony or Canon cameras in the same price range. Almost certainly if I'd ended up with one of them instead I'd be just as happy.

Oh, and the other rule that applies here is, "No matter what you buy, something better at a lower price will come out six months later."

5 Sony is Memory Stick and Olympus is xD, both of which suck because everyone esle has gone SD. Ana-sempai is in Japan right now and e-mailed "I can't transfer photos because I have no reader". The answer is "Yes you do, it's built into your laptop". She's got Canon 1200is or something like that, for small size and weight.

6 The Panasonic Lumix series gets good reviews and the lower end is in your price range.  The Canon Powershot G9/G10/G11 series are excellent cameras, my dad is quite a photographer with several high-end SLR's, and he swears by his G10 for when he doesn't want to lug around the bigger cameras.  You won't find one of those new in your price range, but a used G9 or G10 shouldn't be hard to find and is likely a very good choice.

7 Memory Stick isn't as much of an issue these days, because almost all readers support it, and a lot of Sony products (including the specific model mentioned) now support SD as well.

Wouldn't buy a camera that was Memory Stick or XD only, though.

Summer Days Wednesday was probably the hottest day of the summer here in Duckford.  It got over 90ÂºF for what felt like the thirty-first day in row, but it was the oppressive humidity that really made it miserable.  Eh, it's summer in the upper Midwest, what do you expect, right?  That's the nature of the beast.

Wednesday night, it only got down to 77Âº, and though I didn't think it would be possible, the humidity got worse.  When I dragged myself into bed at midnight, it was still over 80 and the dewpoint was 76, according to the National Weather Service's station at the Duckford International Airport, which is just a couple of miles from Pond Central.

Then Thursday happened.  It was 86 and still thickly humid by noon... simply miserable.  Here's the bad part: that temperature was recorded inside the Duck U. Bookstore!  Yep, still no air conditioning.  Even with a fan blowing directly on me, because of the humidity I was still soaked with sweat.  Other people work in that sort of heat every day, I know... construction workers, for example... but they're paid more than me, and it's pretty much part of their job. 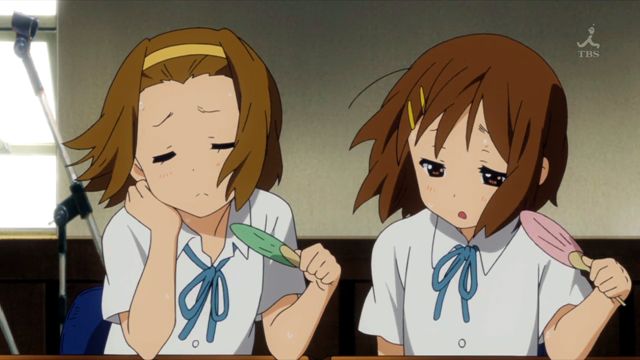 Not so much for members of the Light Music Club
At 1215pm, the Bookstore closed for the day, the first time in the 6+ years I've worked there that we've shut down because it was hot.  Snow?  Of course.  Rain?  Yep yep, mostly because of power failure.  Heat?  Never before.  Most of the U's offices either closed or moved to the newest campus building, which has it's own air conditioning system, for the day.  Of course, it's not like we could pick the store up and go there ourselves.

Hopefully the new a/c system for the U will be turned on Friday, as the Ops staff plan.  Cross your wingtips we don't blow any transformers or something like that...

UPDATE, FRIDAY 7/16:  It was cooler at the Duck U Bookstore, but not because the a/c was turned on.  Instead, it's because it actually got down to the low 60s overnight and a lot of the humidity went away.  Still, I'm glad I wasn't working today, and the a/c might still be fired up today.  It'd make working tomorrow a lot nicer...
ANOTHER UPDATE, SAME DAY:  They did try to turn the new chiller units on at Duck U this afternoon.  ComEd, bless their little hearts, told them that the transformer would be able to handle it.  Nope!  Transformer trashed damaged, new one scheduled for arrival on Tuesday.  Might even get the day off on Tuesday, because most of the campus is powered through that transformer, including the IT center, which means no internet and no phone service when they replace it.  We'll find out on Monday.

1 It's the humid that gets you. Around here 86 is a pleasantly cool morning when we play tennis before it hits 100 by mid-day.

2 What you guys need is a good thunderstorm to take all the humidity out of the air.

3 Yes, 86 is pleasant when you're outside, particularly if there's a nice breeze and you've got a view of the mountain range that feels like it's two blocks away.

But those 86 degrees were measured inside the Duck U Bookstore where there's no breeze unless you're parked in front of a fan, and the only mountain you see is the pile of textbooks you've just unloaded from a dozen boxes that just came in.

FWIW, it hit 94 in Duckford yesterday.

4 Thursday afternoon I waited in the car for an hour and a half while Mom went to see a doctor.  I feel your pain.

The Pond Is Five! 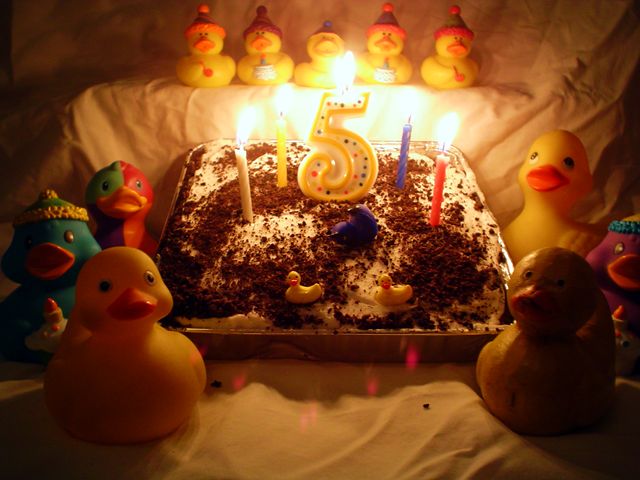 When the Lord of MuNuVia, Pixy hisownbadself, sent me an invitation to join his growing blog empire, I had no idea that The Pond would still be a going concern five years later.  But yet, here we are!

Anybody want some cake?