The Day After: Carriers Here, have a Japanese carrier! 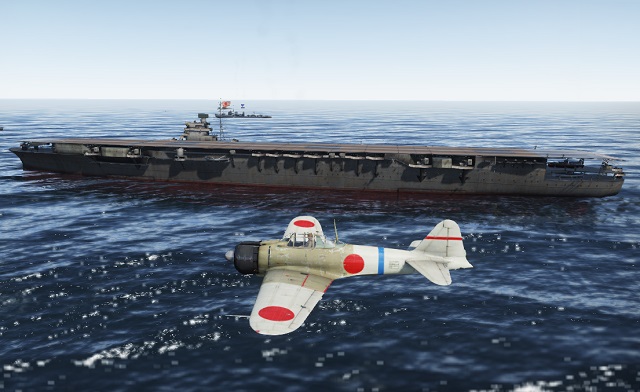 Pretty much based on the Shokaku-class, I think... but of course that means it could be based on the Soryu/Hiryu ships, too, since they were the basis for the design of the bigger ships.

Would you prefer an US carrier? 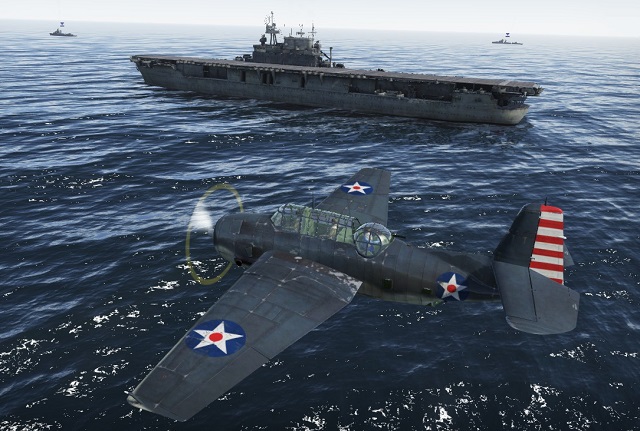 Easy enough: that's a Yorktown-class.  Even now after all these years I think the islands are on backwards. 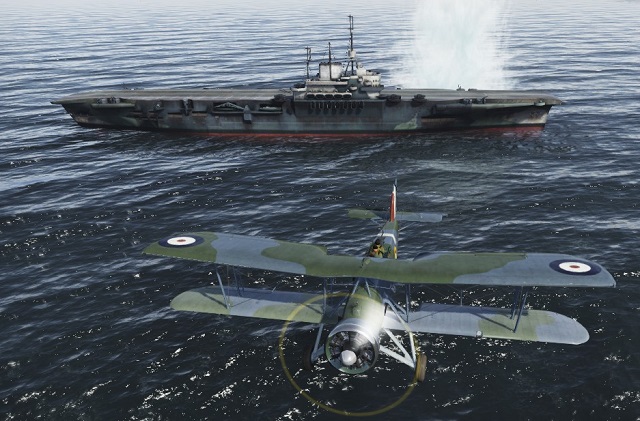 Illustrious-class, seen here being torpedoes by one of her own Swordfish... I didn't mean to hit the [spacebar] on the run-in as I was maneuvering the camera around, but I did.  Well, that's one way to get around the armored flight-deck.

All pictures are from War Thunder, of course.  They certainly took their time modeling these things, even though at the moment we only see them briefly and in passing as targets or... 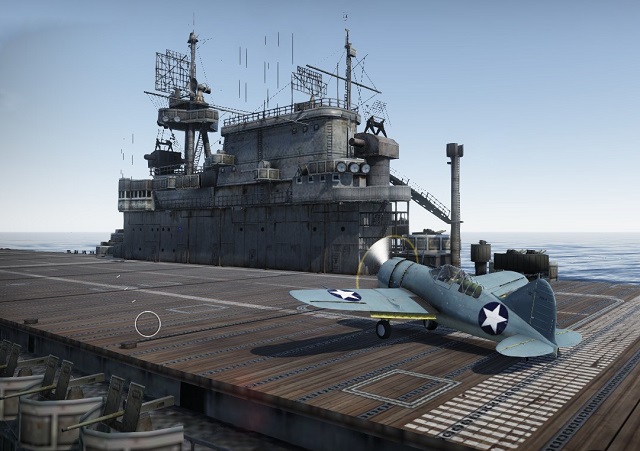 ...when landing or taking off, a relatively rare occurrence.  Still, it gives you a new angle on the size of these things; to whit, not all that big.  Of course, the islands got larger as time went on, but in the late '30s?  Even the Americans had more-or-less small bridge areas.  Of course, the Japanese had teeny-tiny bridge structures, if they had any at all!  However, since I can't seem to actually LAND on a Japanese carrier right now, I don't have a close-up.  Oh well. 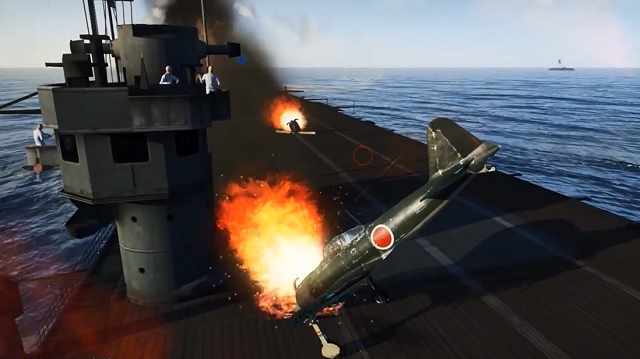 For all it's problems, it is a pretty game.

1 On the other hand, I've unlocked three T-34 variants and am enjoying things immensely on the ground end.

Definitely not well-balanced... the specs for the tanks themselves are pretty faithful, but the ammunition is another thing entirely. Part of this is because how damage is modeled. Shells with high explosive blow up and send lovely fragments all over the place, so a penetrating hit will do tons of damage within a vehicle. Conversely, solid-round penetrators do relatively little, because the game doesn't model armor spalling on high-velocity penetrations... so the fragments that would be going through crew and other important things don't exist, and you basically just make a neat hole, so if the bit you happened to shoot didn't have anything important behind it, you didn't end up doing any damage.

Same story for HEAT ammunition - you make a hole, but the effects of a superheated jet of molten metal in a confined space aren't modeled, so again, you have to aim directly at something important or there's no damage.

Soviet tanks usually have APHE ammunition, as well as upgraded APHE ammunition with better penetration. The advanced German (and US, mostly) penetrators are mostly solid or solid-fragmenting.

It's certainly not impossible to rack up a good run in a German vehicle, and even T-34s will come apart if you expose yourself recklessly. The Marder III is a particular favorite of mine so far... no turret, exposed crew, long reload time, but put a shell in the right place and that satisfying flying-turret cook-off is yours. Heck, even in the wrong place, the other guy is probably stunned, wounded, gun pointing in the wrong direction with a smashed breech and a locked turret ring, engine on fire, and your next shot will be paying a visit very shortly...

I oughta do a post on this and take some screenshots. Don't get me wrong, the game is a lot of fun, but if you take it too seriously as a simulation it will seriously harm your blood pressure.

Thanks for introducing me to it, Duck. The aerial stuff is plenty fun too!

2 I didn't mean to hit the [spacebar] on the run-in as I was maneuvering the camera around, but I did.

Does the game penalize you for blue-on-blue incidents?

Also, just how badly outclassed is the Swordfish compared to other torpedo bombers?  (It seems to me that in real life, WWII-era British naval aviation was a poor relation to US or Japanese naval aviation; their only triumph that comes to mind for me was crippling the Bismark.)

3 Also, just how badly outclassed is the Swordfish compared to other torpedo bombers?

I was going to answer, but I realize that this is going to grow past a mere comment in size.  Congratulations, you've created a post!

Everybody else, hold your opinions until Sunday.  I have a mandatory post to do Saturday.

4 It's not very often that you see a TBF Avenger with the early-war red-dotted roundels.  They were officially eliminated May 15, 1942, due to concerns that the red center dots could be mistaken for Japanese hinomaru at a distance or in poor visibility conditions.  The TBF was just entering service around that time.  6 were delivered to Midway island in time for the pivotal battle there, but by that time in June the red dots were probably painted over with white.

In game terms, is that actually specifically a very early TBF, or do all the TBFs look like that?

Yup, leastwise all I've seen.  Gaijin generally does a good job on historic liveries, but they tend to miss a bit on the American side.  I've recently acquired both the Hellcat and Corsair, and neither of them has the right shades of blue, for example.

Having said that, on average they're really quite good.  On those occasions that I've pointed and laughed at a color scheme (A6M2 mod 11, aka the Zero in the top picture, I'm looking at you), a little digging has proven Gaijin correct.  At least some of the mod 11s had that tan center section.

6 Just through I'd throw this out there for those who might be interested.  A friend of mine did a series of books about Japanese experimental warbirds. Here's the first.

7 I assume he covers the J7W Shinden.

Thank you! I'm looking forward to it.

9 I could ask him which volume it's in. There are similar books on German secret planes, including a lot that never got off the drawing board. The Japanese ones were particularly difficult to research though. 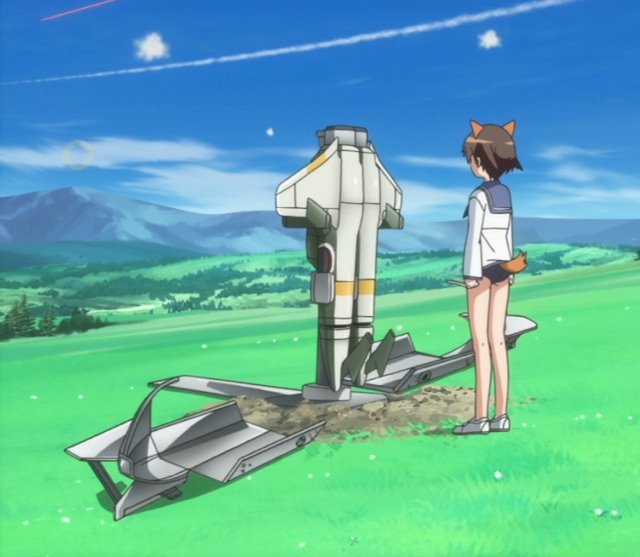