Sad Duck In Snow, 2007 Edition! Here we go again!  Exactly one year to the day of the last Snowmageddon, The Pond is in the grips of another potentially big Winter Weather Event.  Last year, it was twelve inches of snow... this time around, they were forecasting five inches of snow, followed by up to a half-inch of ice.

Well, the snow part has proven to be a bust.  Oh, it did snow, but it wasn't more than a light dusting... now I think it's sleeting, and it has been for a few hours.  The wind is steady around 20mph, with stronger gusts.  Local media is warning that tree damage and power outages are possible.

This isn't pleasant, but it's really small potatoes in comparison to the winters The Pond experienced when it was in Minnesota.  200 inches of snow in a winter, -100 degree windchills, two weeks where the HIGH temperature was never above fahrenheit zero... now THAT's winter, my friends.

As is, I'm well stocked with supplies.  On Friday, I discovered another source of Pocky and other Japanese treats (including two flavors of Ramune soda, which I was previously only able to get at a local sushi place... for $3.50/bottle!), so I'm set for a long winter's night.

To keep with the new tradition of the Sad Duck In Snow posts, here's my favorite photoshop: 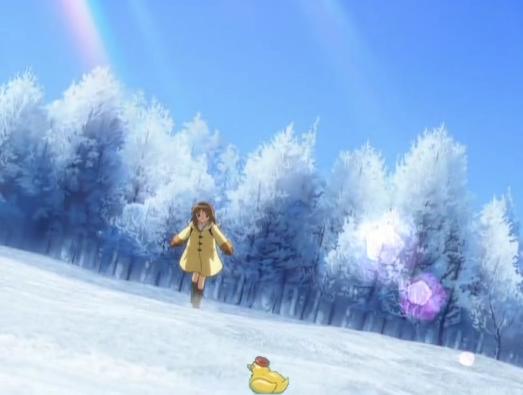 UPDATE 705pm:  Roads are reportedly quite ice-covered across Duckford, and  the authorities have strongly discouraged travel except for emergency purposes.  Lots of crashes on the highways in the Chicago area, with a 20-mile stretch on one closed completely.  The trees around The Pond have become popsicles... it's quite pretty, honestly.  The news says that temperatures are slowly rising, and the freezing rain should be stopping any time, changing to regular rain.  Until then, though, cross your fingers.

UPDATE 958pm:  I think the worst is past, though the wind is still blowing hard, so trees and powerlines are going to be at risk.  One of the trees outside The Pond is audibly creaking (though I'm not sure which one).  Fortunately, it's nowhere close.  One of the local TV stations is off the air, which isn't surprising; it was on generator power back at 530pm.  There's at least two known dead from the storm.  About 12000 people are without power in Duckford.  It's not just downed lines, but quite a few transformers have gone boom.  In Iowa, a plane bound for O'Hare skidded off a runway, with no injuries.  The lights flickered here around 830pm, but so far so good.

UPDATE 210am:  All clear.  Wind has died down, the rain is now just rain, and the tree is still up.

1 That whole mess is what blew over Arizona Friday and Saturday. My folks had 2 1/2 inches in their gauge, and the storm basically doubled the Phoenix rainfall total for the year.