Electrics When one thinks of railroading in the US, you either cast your thoughts towards steam engines or diesel.  And rightfully so, those two styles cover probably 95% of the engine types in the country's history.  But there is one other major style, one that often gets overlooked.  That's Electric locomotives.  Now, I'm not talking about the interurbans like Chicago's 'L' trains or New York's subway, but big engines that can pull real trains.

Despite the advantages of the electric, like not having to pull its own fuel around, they never really caught on here in America the way they did overseas.  Probably that's because of the one huge disadvantage electrics bring to the field: infrastructure requirements.  Overhead wiring (or the less-used third rail method) to carry power to the trains had to be installed over the entire length of a run.  The cost of maintenance could be prohibitive, particularly in areas where heavy snow occurred.

That doesn't mean it wasn't used here, though. 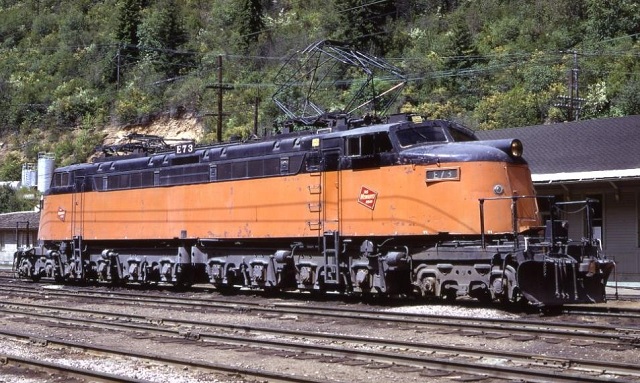 A helluva story behind these.  General Electric originally built 20 of these beasts for an order from the Soviet Union... just as US/Soviet relationships went to hell and they were banned from exporting them.  Eventually 12 of the locos made their way to the Milwaukee Road, where they were known as "Little Joe (Stalin)'s locomotives", which eventually got shortened to "Little Joe."  With a 2-D + D-2 wheel arrangement (meaning two unpowered axles and four powered + four powered and two unpowered), the Little Joes weighed in at roughly half-a-million pounds and generated about 5100hp.  By comparison, the famous EMD F7 freight engine generated 1500hp.  The Little Joes ran out in Montana and Idaho on the Milwaukee Road's Rocky Mountain Division until electric service was retired in 1974.  One survives in running condition at the Illinois Railway Museum, and four others of the 20 survive in non-running shape. 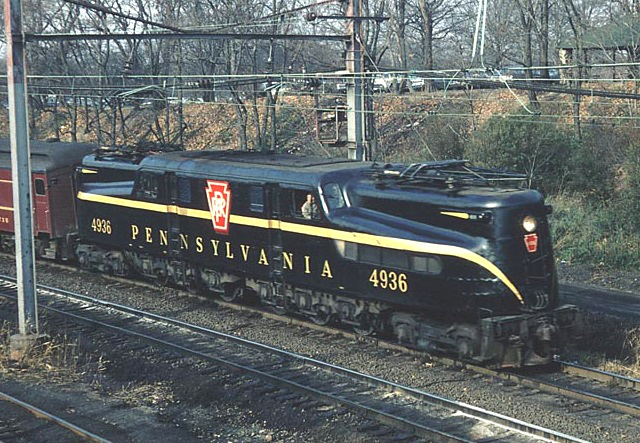 The GG1 entered service in 1935, and wasn't finally retired until 1983.  In between, they were certainly the most distinctive locomotive on America's rails.  Limited to use on the East Coast, they moved both passengers and freight exclusively for the Pennsy, though successor lines (Penn Central, Conrail and spinoffs, Amtrak) continued to use them as well.  They weighed 475000 pounds, generated a continuous 4600hp, though that could increase to 8000hp for short lengths of time.  Over 130 GG1s were built, 15 of which (and the original prototype known as "Rivets") still exist.  None of them are in running condition for many reasons, not least of which was the use of PCBs in their transformers.

So there ya go, a couple of electric locomotives for your perusal.

1 "...the original prototype known as "Rivets"

That is a sinister-looking train engine.

Makes me wonder, in the (unlikely?) event we get our renewable energy situation figured out, whether we'll see a resurgence in this style of locomotive.

3 What happened to my comment here? Did I cross a line?

4 Steven, I just looked in the "backstage" comments area, and I've got nothing from you.  I may have deleted it with some spam by accident.  Sorry 'bout that!

5 No problem. I understand.

6 You're not going to repost it?

"Economically speaking, it made sense to buy more expensive locomotives which could run on cheaper track."

8 You're not wrong.  It's so much easier to run a self-contained diesel-electric loco than build all the infrastructure needed for the catenary wires.

9 Oh, and I have very few lines to cross.  I'm not fond of political discussions here, true, but as long as someone isn't flat out swearing at me or my readers, I'm mostly cool with it.

Except for raw URLs.  That will set me off.