Content? Oh yeah, that... Astute readers may have noticed a lack of actual content at The Pond recently.  Fact of the matter is, I've not watched much anime (or much of anything else) recently.  I've been far too busy at the Duck U. Bookstore (Buyback week), dealing with the weather and car problems, and enjoying the company of my houseguest to really do such things.

Example: Monday morning, my car was completely frozen shut.  All four doors and the trunk, entirely iced over.  Wound up having to take a taxi into work, but only after the driver's side door-handle had come off in my hand.  Might have had something to do with the nigh-on-zero temperatures we had Sunday night... and the rain we had Sunday afternoon.  We had a fifty degree temperature swing in under six hours: iceblox city.

So today, my car went into the dealership to get both handles on the driver's door fixed, and while the door now has handles, they screwed up the lock and mangled the car key.  Fortunately, I have a spare, but that's the sort of luck I'm having.

Monday night I watched some Akane-iro ni Somaru Saka, but I couldn't tell you anything about the episode.  It was funny, it made me laugh, but if someone put a gun to my head, I wouldn't be able to say why.

So until my life slows down a little bit, expect light and fluffy, mostly content-free posting...  for example, here's a picture of Alice from ARIA: 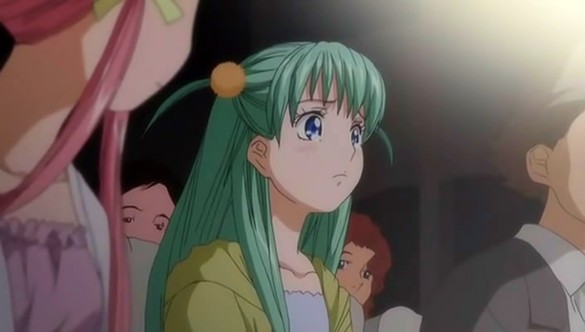 She's crying over the lack of content, too...
Content-Free!

1 I'm guessing that's from Origination, and she's listening to Athena performing at the opera.

2 It is from Origination (since it's the only ARIA series in widescreen format, that's not a spoiler).