There are a couple of restrictions, of course.  I won't answer questions involving religion or politics... there are plenty of people out there who cover those topics infinitely better than I ever could, and I created The Pond specifically to be a place without such things.  Also, while I'm not opposed to answering personal questions, I withhold the right to tell you to buzz off.  Finally, there are many, many things in this world that I am not an expert, talented amateur, or even clueless n00b, regarding.  If you ask me a question like "how do I convert my car from using tires to running on tank treads," I'll do my best to answer correctly but I make no promises... no blaming me when you wind up stuffed into the side of a hill, upside down and on fire.

In the past, people have Asked Wonderduck why sloths don't live forever, why domesticated ducks are albinos, and was I planning on watching the Kancolle anime, and many many other things besides.  So now it's your turn... 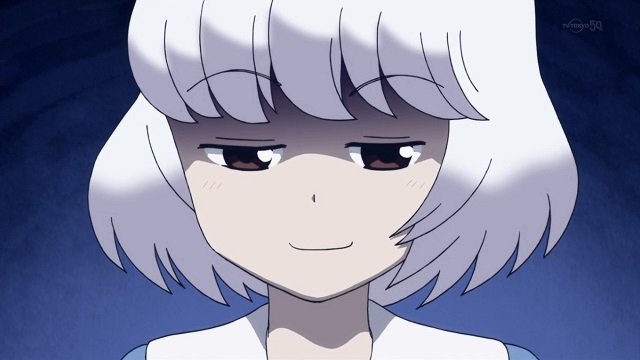 1 What was wrong with the third Madoka movie?

3 What is your most middle favorite anime. (Most Favorite and Least Favorite questions being lame)

4 Relating to Kancolle ep 6 and it's curry contest, J-list used to sell a Japanese curry mix flavored with apples, Vermont Curry. Would you try that? Also, has the series mentioned the Kaiten suicide torpedo? In game, the shipgirls request that it not be loaded on them.

5 Can you give the elevator pitch on why I should look into Hidemari Sketch?  It's about to be available for streaming.

6 @4 Muon, sure, I'd give it a shot, particularly if someone decided to send me a box for free.  I can imagine it's... interesting.

And no, they've not mentioned kaiten, and I don't expect them to.

7 @5 Tom Tjarks: why I should look into Hidemari Sketch?

If it's going to be streaming (and free), why NOT give it a try?  If you're looking for more concrete reasons, it's lighthearted, funny, and nice to its characters.  Seriousness does occur every now and again, but it's not SERIOUS serious... a set of lost apartment keys, a torn uniform, that sort of thing.

If you're looking to de-stress after a day, HidaSketch is as good a way as any, and better than most.

And there are ducks.

9 1) What anime are you following at the moment? 2) You've demonstrated a lot of knowledge about military history, where and when did you learn it? 3) What is your favorite anime duck?

Once upon a time you could get this close with a well known aftermarket kit:
https://www.youtube.com/watch?v=-9CgOhj0HP0
(Images safe for work.  Although I can imagine that in the natural course of this sort of thing, some contestants had to put their pocket change in the cuss jar, the dialogue is pretty much unintelligible over the mechanical clatter in the background.)

More at
http://www.modeltfordsnowmobile.com/lcmainhistoricalimages.htm
including some other cars similarly converted.

Of course, anything you can do to a Model T, you can do better to a  Willys Jeep.  There was actually some military interest in them, with or without skis in front:
http://www.milweb.net/features/jeep.php

Something more like a proper tank treads / skid steer conversion was commercially available (though supposedly no more than half a dozen people availed themselves of it) and may be seen in action at
http://www.armyjeepsforsale.net/jeep-willys-with-tank-tracks.php
Special bonus points for completing what appears to be the maiden voyage and/or Dad's first lesson in driving the thing without inadvertently modifying of any of the parked vehicles or dogs in the near vicinity.  Toward the end a couple of the young'uns go off road and do a few things that... uh, a well handled regular Jeep could have done, but they make much more noise in the process.

And, heck, here goes the rest of the afternoon:
http://www.unusuallocomotion.com/
(Vast amounts of outside-the-box thinking in 35 articulated -- no pun intended and not much of one achieved -- and 3 uncategorizable categories.  The moon is there.)

1) Why, Kantai Collection, of course.  You should read the episodic recaps, they're quite good.

2) Like most boys, I got interested in that kinda stuff at a young age.  Played my first tabletop wargame (Fight In The Skies!) around the age of nine or ten... against Pond reader Vaucaunson's Duck, in point of fact... and it grew from there.  It's some 35+ years later now, and my MilHist library is... um... sizable.

Unfortunately, it's not.  Pretty much tastes like other pre-fab Japanese curries.  I was expecting some serious apple, but no.  Maybe it comes through in the "mild" flavor, but what's the fun in that?

Someone hasn't read my curry rant!

I consider prepackaged "hot" curry to be mild, too.  If it doesn't polish your silverware as you eat it, it's not hot enough.  (For things that are flavorfully hot.  Thai curry?  If it's not stocked in the decongestant aisle at Walgreens, it's bad and wrong.  Buffalo wings?  Mild is fine; the hot ones just taste like pain.)

And I'm supposed to be asking you anything here...

What are your favorite and least-favorite Japanese foods?  (Dealer's choice as to whether to limit the answers to typical as-seen-in-anime food or not.)

Speaking of food, my favorite Japanese food is a nice tonkatsu.  Simple, I admit, but there you are.

Least favorite is anything involving eel or octopus.  I am willing to admit the possibility that good food involving either ingredient is possible.  I have not experienced such miracles, however.

Respect.  I like mine in katsudon more than the "simple" version, but tonkatsu is good stuff.

18 I've made myself many batches of Vermont Curry (hot).  It's not hot, and with all the other ingredients, I can't imagine anything like apple or maple is in there.

But it's tasty stuff, if not especially hot.

I recently learned how absurdly easy it is to make fried rice, and last weekend took it to the next level, with Bacon Fried Rice.

19 Did you see the curry episode of Rosario + Vampire?

21 I've got Shattered Sword, and it was everything advertised.

I've also been trying to fill in holes - I've got good books on WW1, the Korean war, and the Falklands war, but nothing on the two Israeli wars or, for that matter, Vietnam. Any recommendations along those lines?

22 @21 Avatar: Antony Beevor's Stalingrad and The Fall of Berlin are good, battle-specific reads on the Eastern Front.  As far as a general history goes, though, I can't help ya... my knowledge is limited for that Front.

Along those same lines, I've never been particularly interested in the Vietnam war.  I've spent a little time reading up on Chosin during the Korean war, but that's only because one of my professors at Duck U., one of the nicest guys you'd ever want to meet, was a Chosin Marine.  But all in all, I'm a WWII in the Pacific guy.

The Falklands interests me, mostly because it was the first conflict that I followed as it happened.

23 Honestly, I'm not terribly interested in Vietnam specifically - but I've been tryin' to fill in the gaps left by a public education, and sometimes I get surprised. I had picked up a couple of histories of India (one pre-, one post-independence) and had a pleasant time brushing up on that aspect. The Falklands book was another purchase along those lines - before I got the book I could just about tell you that there was a place called Falklands and that there had once been some kind of war there, but that was it.

I'll look up Beevor, though. Could definitely enjoy the Stalingrad one. Thanks.

24 Stalingrad is quite good, better I think than Fall of Berlin.  Beevor has a German bias, because, quite simply, those are the records he had access to at the time the book was written.  Some reviews make note of that as an anti-Soviet bias, that the Sovs just react to German plans.

Of course, nothing is further from the truth, and anybody who has actually read the book will tell you that Beevor doesn't suggest that.

My favorite baseball book, Nine Innings, examines baseball as a whole through the playing of one game in 1982 between the Milwaukee Brewers and the Baltimore Orioles.  Some reviewers throw a hissyfit because the author, Daniel Okrent, doesn't do much coverage of the behind-the-scenes aspect with the Orioles.  There are two reasons for that: 1) Okrent had friends inside the Milwaukee front office that gave him what was, for the time, unprecedented access to everything involving the Brewers.  Then, reason #2), Earl Weaver was the manager of the Orioles.  Weaver didn't tell his own players what was going on, he sure as hell wasn't going to tell some random writer anything.

Same sort of thing with Stalingrad.  You write what you have.

The Falklands war is interesting for another reason: It's the only time since WWII when a submarine sank an enemy warship "in anger".

ARA General Belgrano was formerly an American Brooklyn-class light cruiser (USS Phoenix) purchased by Argentina. It was sunk by HMS Conqueror on May 2, 1982.

(My info may be out of date; didn't the NK's sink an SK ship with a mini-sub a couple of years ago?)

For reasons of legality, no.

For anecdotal reasons (and if you can count higher than potato), yep.

27 Have you seen my AMV? I wanted to thank you, your "ducks in anime" blog proved to be an invaluable resource to enhancing the overall impact of how my video turned out.