Why Blog? A few days ago, I got to wondering just why I blog in the first place.  It surely wasn't for the public acclaim, fortune and fame.  It wasn't because I had something important to say... or indeed, anything to say at all.  So why do I do it?  Why do I spend hours staring at a computer screen, trying to convey... something... to the various denizens of the intartubes, most of whom don't care what sort of effort and research I may put into a post? 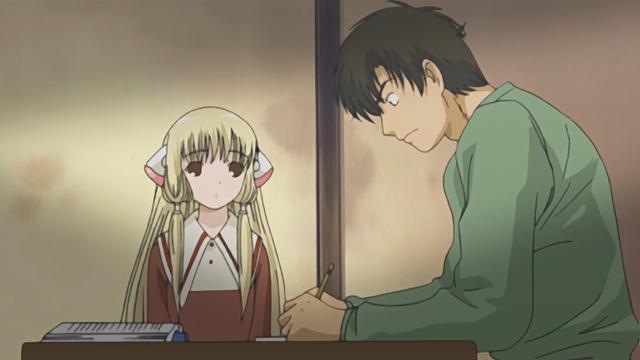 Kinda like this, except without the pencil.  Or the paper.  Or the android.  And with more ducks.
So really, nothing like this at all.

I've read that the primary reason that bloggers blog is narcissism, that they think so much of themselves that they figure that everybody will be enthralled by their every word.  I suppose for some (most?) that's the case: look at the preponderance of "I Love Me!" blogs, facebook pages and tweets out there.  Anybody who knows me would immediately start laughing at the thought of me being a narcissist... probably to the point of hypoxia.

I started The Pond all those years ago because the Official First Reader of The Pond, friend Mallory, suggested that maybe some other people might find the e-mail I sent her after every F1 race funny too.  After some poking and prodding from her, I finally gave in.  After a short post about Azumanga Daioh caught the eye of Big Papa Pixy Misa, founding father of MuNuVia (and later MeeNuVia), he invited me to join his burgeoning empire.  And here I've sat, ever since.  I reconnected with The Official First Friend of The Pond, Vaucaunson's Duck, more or less through The Pond, an amazing feat since we pretty much hadn't spoken much since our time in high school.

Somewhere along the way, Steven Den Beste started to linkify me for reasons that baffle me to this day.  Via that connection, I starting conversing with the Brickmuppet off-blog.  My expansion into WWII history brought in The Old Man, flatdarkmars, David, Peter the not-so-great and readers too numerous to mention.  Various and sundry anime posts caught the eye of Siergen, Avatar, Ed, Author, Ben, Don, Ubu Roi, Jeff Lawson, and Robert from the Anime Corner Store every now and again... and plenty of other people as well.  GreyDuck and Colleen started dropping by when they found out about the rubber duckies... I think everybody else just tolerates the ducks, otherwise.  Heh.

But the F1 Update! has always been the heart and soul of The Pond, I suppose.  The Official First Overseas Reader, Flotsky, dropped in because of them.  People have said that they didn't give a rat's hindquarters about motorsports at all until they started reading the F1U!s.  And hey, The Pond started because of Formula 1.  But as of late, F1 has also been my bane; it takes a lot of time on race weekend to adequately cover a F1 race: just watching Practice 2, Quals and the race itself is six hours more or less, not to mention the hours it takes to do the writeups for them... and the F1U! itself usually takes as long as any two or three other posts combined, somewhere in the vicinity of three or four hours.

So why do I do all of this?  Surprisingly, the answer is pretty simple, and can be boiled down to one word:

Friends like Pixy, Steven, 'Muppet, The Old Man, flatdarkmars, David, Peter the-not-so-great, Siergen, Avatar, Ed, Author, Ben, Don, Ubu, Jeff, Robert, GreyDuck, Colleen, Flotsky, Mallory, Vauc, and all the other myriad readers of The Pond I haven't named.  You guys make it worthwhile when the jerks come out.  When I don't have the energy to write much.  And you understand when I don't write at all.  And I never would have met any of you if it wasn't for The Pond.

That's why I blog.

Thanks, all you lot.


PS - If you weren't named, don't take it personally... there aren't enough pixels in the world for me to thank everybody the way I'd like to - Wonderduck.

1 I started to read this blog because of the F1U. The history and learning about Anime are a welcome bonus.  Thank You.

2 No matter why you blog or what you blog, I'm just glad you do.  Hope you keep it up!

3 You're most welcome, always.

And thank you for informing, educating, and entertaining.

4 *thinks* I started dropping by because GreyDuck mentioned your 12 Ducks of Christmas (so yes, other people care about the ducks). Then I got sucked into the Rio Rainbow Gate posts, for sheer surreality.

I actually don't read the F1 or history posts, but I think I read everything else. The bookstore trials & tribulations, the anime, the ducks... Yeah. :-)

5 I most likely found you via a link from SDB, it's been long enough that I can't remember anymore.  I'm a content junkie, one of those people that will cycle through the bookmark list several times a day even when I know there's no chance of an update.  I like your anime and F1 posts, as well as the occasional duckie or generic posts, but the WW2 posts make my day when you do one.

6 I found you via SDB, bookmarked you for the WW2 posts, and subsequently you got me back into Formula 1, which I had not followed since circa 1992-1995.  Great fun!

7 Thanks for all your great posts!  Especially this one.  I'd write more, but the new season starts tonight!

8 I think SDB linked you for the anime.

The military posts draw me back occasionally, and you have the ability to make racing exciting.

9 I struggle with the same thing myself. Lot of the time I wonder "hey, what have I been up to?" and it comes down to "playing video games, painting orks, reading, etc..." I've written blog posts and just deleted 'em because they didn't really have anything interesting in them.

You do a great job of making interesting posts on all sorts of things, which I can only envy.

I oughta do more painting posts, though...

10 I'm not sure where I happened across your blog (either SDB or Pixy, I'm pretty sure) but it was interesting enough to keep coming back.

(And now I'm beating up other ninjas with you, too! Go, Turtles!)

Like many others, I found the Pond via SDB.  I came for the Japanese animation, of which I used to be a casual fan, but I stayed for the Formula One (I'm a bigger and more loyal fan of that, despite the baleful influence of Eccelstone, Mosely, et al.) and the naval history. You even make rubber duckies interesting, which is IMO a sign of genius.

12 I really don't care that much for F1, but  your posts are can't-miss on the subject.  And one of these days, I'll figure out just who HWMNBN really is!

Thanks for the hat-tip, amigo.  SDB was the beacon on my path to the most famous blog from Duck U. - and as you so smoothly pointed out, I LUURRVE your WW2 posts.

So where is the one about the Cats?  (Just yankin' your chain.)  If you keep writin' 'em, we'll keep readin' 'em.  Mercy buckets for your work, Monsewer Duck.