Wanna Play World of WarShips? Hey Binkie!  Have you been browsin' this here blog and seen them purty pictures of naval vessels... y'know, like this one: 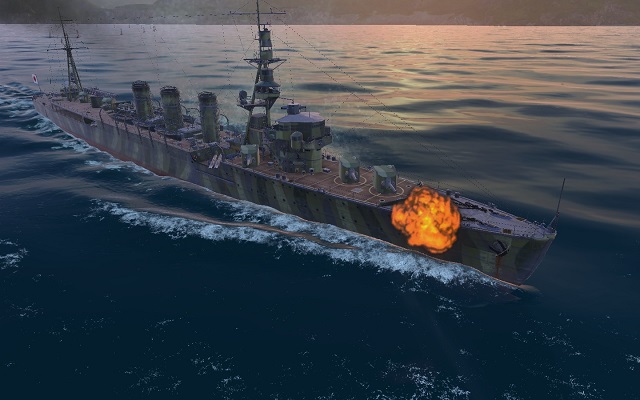 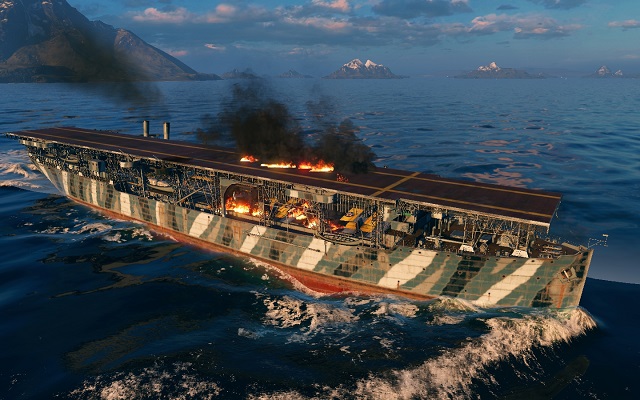 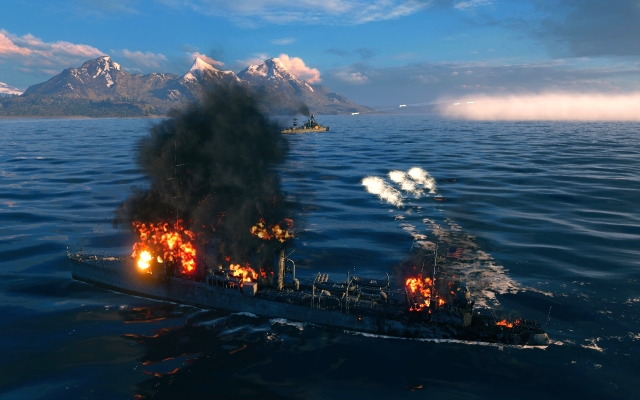 ...and thought to yerself, "Gee, that looks like a whole heapa good ol' fun.  How do I get started?"  You have???  Wow, now how's that for a good guess, huh?  Yep, that's me, Wonderduck, aka Carnac the Magnificent.  Sis boom bah.

Today's your lucky day Binkie!  I have in my possession a hermetically sealed envelope.  Kept in a #2 mayonnaise jar on the back porch of Funk and Wagnall's since noon today, nobody knows the content of this envelope... except for me.

And soon, you too will know, because I'm about to tell you.  IN THIS VERY ENVELOPE is a gift code for a new player of World of Warships.  It ONLY works for a new account, not an existing one.  With it, you get a free ship, a passel of credits, and a bunch of doubloons, the special currency of the game that you can normally get only via cash.  So if you're wanting to play, and you're NOT currently playing the game, let me know in comments so I can get the code to you! 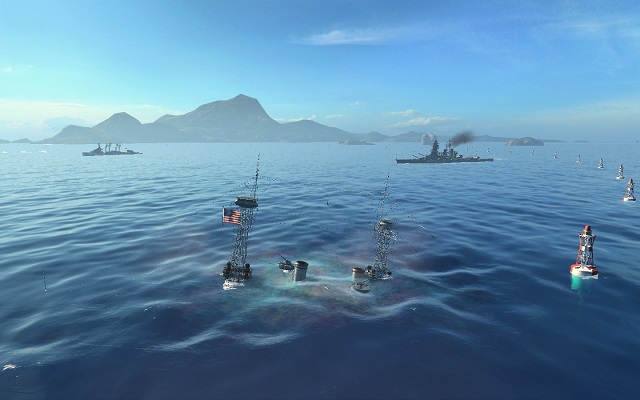 Hopefully you won't end up like this too often.

1 Too right! And if you act now, you too can grind up through tier 5 only to fall one XP short of that destroyer you've had your eye on!

2 I just realized that all your battles in that game have been in daylight, quite understandably. But historically nearly all major gunnery battles since the Dreadnaught era have been night battles. Day battles were all fought with aircraft, not guns. (Leyte Gulf is one of the rare exceptions, of course.)

3 Steven, I've seen videos of late twilight battles, but nothing at night.  Without a decent fire-control radar system, or a way of illuminating in-game, AND include carriers in the game, too, we'll probably never see a real night fight.

4 Oh, I understand why the game runs everything in the day. "Fun" is more important than "Realism", after all. The early-tier ships don't even have radar, and night battles would just be ships stumbling around hoping to find one another.

"Fun" is more important than "Realism", after all.

That's why the destroyers have infinite numbers of torpedoes and no one ever runs out of ammunition, of course.

6 There is a map that's basically a night map, but it's also set far enough north that the northern lights give everything a green cast. It doesn't impact gameplay in any way.

I've seen references to the eventual inclusion of weather effects, but I doubt they'll have any serious effect on gameplay.

7 Have the dazzle camo-patterns ever caused you even momentary confusion as the enemy ship type or direction of travel?

8 In game, no.  The only time it really becomes visible to me is when I'm close enough to be firing over open sights (imagine... boresighting a 16" gun), at which point it's pretty darn clear what type of ship you've got in front of you and which way it's moving.

I suppose it's possible those people playing with BigMcLargeHuge monitors and 10 videocards linked together might have a different experience, though.

9 At this point my computer isn't "elite", and I usually build more toward extreme multitasking than single-app performance, but I run the game at max settings and you can't even see the camouflage unless you're close to the other ship or looking through the zoom.  At medium and long distances the camo isn't even drawn, as far as I can tell.  The main point of the camo-patterns is to change numbers under the hood.

10 Some of the premium ships have unusual camo. You can really tell a Kamikaze R from the pattern alone (which is usually a signal to make a radical course change - if one of those buggers pops up, the torps are already inbound!)

Ship type isn't really something you're going to mistake, though - the icon tells you what class of ship it is, and you can see the name and HP bar by holding ALT.

Got my T5 destroyers. These guys tend to have really good or really bad games - you either get your butt shot off right away, or you have one of those fun games where you sink three ships and laugh maniacally as a spread of torps pounds into a Kongo. The latter can be worth a lot of XP.

There are a few ships that play differently - the Kuma feels like a big, unstealthy destroyer, while the Russian DDs are better played like cruisers, hunting other DDs with their guns (you've got the torps to obliterate anything at point-blank range, but that's all the range you've got!)

Having a hard time with the Langley - you just don't have the reserve planes aboard to be able to afford mistakes, and there's a huge difference between T4 and T5 CVs. Would try the Hosho but I'm having an even harder time with the Myogi, which has crappy accuracy plus a serious shortage of guns; it's not even good in a brawl. No wonder they never built it!

11 Weather is supposed to be coming later this year.  Given how they've done other things, I expect it will be nifty visuals, and some adjustment to the numbers in the engine to make it harder to spot the enemy and/or hit them, maybe affect your speed, or possibly how long it takes to launch and recover aircraft.
Some of the specialty camouflage patterns are pretty neat.  I haven't seen a true razzle-dazzle pattern yet, but I've seen some Cleveland's sporting a pretty wild pattern.
The Myogi is just awful, and it's the only Tier IV ship I still have.  Hopefully I'll be able to get the XP I need to upgrade to the Kongo with the next triple experience weekend.
Last night I upgraded from the Langley to the Bogue.  As usual, the fully upgraded Langley was superior to a stock Bogue, but that is clearly going to be change once I get some upgrades.
Some of my highest scoring, most fun battles have been in destroyers.  If you survive the initial frenzy and get past the enemy cruisers, life is good.  On the other hand, my absolute best, most fun, highest scoring battle was in an Omaha when I was the only Tier V ship on my team, and the other team had a Konigsberg to match me and was otherwise Tier III and IV.

(In WWI there were a couple of night battles fought between the RN and the Kriegsmarine in the fog. Talk about a naval nightmare, since this was before radar. Finding the enemy was only part of the problem. Finding your own ships was also a challenge. Even figuring out where you yourself were located could be fun. Lots of dead reckoning, emphasis on the "dead".)

13 The problem with fog is that a lot of the balance between ships is dependent on engagement range and detection range; a general rule of thumb is "the bigger and nastier it is, the further away you can see it". If nobody can see past the end of their nose, that's a huge bonus for the big boys who can loom out of the fog and ruin your day with a single broadside (and a huge nerf for destroyers, who can use torpedoes to do similar things normally, but now have to worry about bumbling into range of stuff that can dismantle them...)

To the extent that there's any balance at all, messing with visibility even further throws that completely out of whack.

14 Another fun thing about fog is you get a lot of friendly fire accidents.

15 I  think you can make an argument for fog working.  The match balancing in WoWs isn't just ship against ship, it encompasses the number and types of ship in each team as well.  This doesn't always work well, especially on maps that split the side up.  Fog could equalize that situation some.  Although that does bring up another point that actually bugs me a bit.  There is no fire control or radar in any sense related to reality.  There is, however, a lot of meta-knowledge that informs how you play different maps.  If you know what ships are on your team, you know generally what ships are on the other team.  The tactics tend to standardize for certain maps, as well...on the "Race" map you know what's going to happen most of the time.  (one of the reasons I like the AI opponent maps is because players are more willing to go one-on-one and engage and spontaneous team-ups...on the vs. maps you usually have one or two people start shouting out the standard formation for the map, and if you disagree with the strategy or are in the wrong location you're just stuck with a bad game)

Fog would remove the ship-to-ship balance, but I think it could add a random factor that would make a lot of games more fun.  Maybe WoWs could introduce it as a toggle, "I'm OK with fog games. I understand the balance is changed."

16 Steven posted the "friendly fire" comment while I was still typing.  That is, unfortunately, the best argument against implementing fog.  WoWs has already had to devote a lot of time to managing friendly fire problems.

I had actually thought about this previously.  The game already gives you a targeting computer for torpedoes.  It shouldn't be a problem to implement a friendly fire warning.  Guns shouldn't be any more of a problem than they are.  I've accidentally hit friendlies when firing into a crowded area, but the only time I actually severely damaged someone was when my brain refused to grasp the difference between green ships and red ships for 30 seconds.