Thoughts and Webrangling I'm working on a couple of posts, each about a particular aircraft carrier, at the moment, but neither are ready for prime-time quite yet.  So, while you wait, here's this post instead!

Just received an order from Robert's this afternoon that I'm very excited about.  First up is HidaSketch x 365, the second series in the franchise.  The other thing I got is ARIA the Origination.  That's the third and final series of the ARIA saga, and it has what I consider the single finest episode of anime I've ever seen in it, ep09.   The interesting thing about that particular episode is that it really only works if you've watched all the others in the franchise; if you just drop in the DVD and watch it standalone, it doesn't have anywhere near the impact.  I suppose some might say that because of that, it can't be the best episode ever, to which I'd say "pbpbpbpbpbpbpbpbbpbpbthhhhhhhhh."  So there.

Nozomi/Right Stuf really did a nice job on their releases for ARIA.  No skimping here.  Four boxes, four or five DVDs per box, a "guidebook" in each as well with episode notes, sketches and the like.  Then there's the best idea I've seen in a while: the extras DVD.  Instead of spreading things like interviews, trailers, music videos, etc, across all the other DVDs in the box, thereby using space that could better be used for other things, Nozomi put them all on their own disc.  Great idea!

In other news, we've gotten our first applicant for the Formula 1 gridslot relinquished by the failed USF1.  Durango Automotive, until recently a GP2 team, made their desire known today.  Unfortunately, the reason they withdrew from GP2 was... financial problems.  Just what we need, huh?  They're confident, however, that if they get the slot, they'll find backers... sound familiar?  Best of luck to you, guys, you'll need it.

Speaking of USF1, it's official: the team is totally dead.  They fired all their employees, whom had been on unpaid leave for many weeks, via e-mail a few days ago.

Finally, the first episode of the second series of K-On!! has hit the torrents, and it's just like the first series only moreso.  Hate the OP, though... sounds like someone hit the helium bottles before they started singing.  Enjoyable episode, not anything deep and memorable... just like K-On! probably should be. 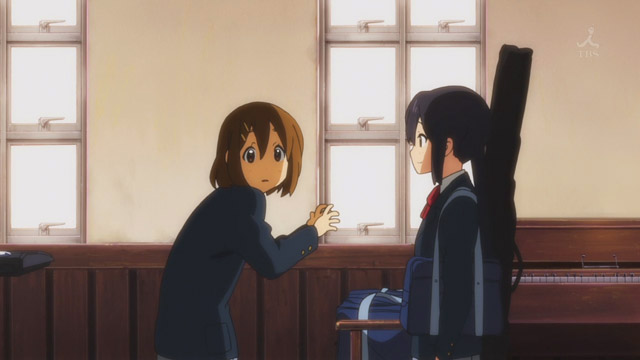 Out-of-context, this screencap looks really, really wrong.
Okay, break's over.  Everybody back on your heads.

1 Do I understand you correctly? There are 16 or 20 disks total in the Aria release?

3 Please let us know what you think of the video quality on that HideSketch x 365 release. There's been a lot of fuming on Anime on DVD over the encode, and while I'm not usually all that picky about that sort of thing, I'm also not that big of a fan of the show to start with, and I really ought to start cutting back on the DVD blind-buy purchases...

4 OK, you're talking about the entire Aria franchise, not about one title in the franchise. That many DVDs  makes sense, in that case.

5 Mitch, I refuse to go to Animeondvd.com to see what, exactly, people are complaining about, but after watching the first two episodes I can't imagine what the problem is.  It looks crisp and clean with no artifacting or color banding that I could see.

I suspect that it's probably better quality than Sentai's release of the first series, simply because there's fewer episodes per DVD (16 on three for x365, 14 on two for the first series).

The lone problem I saw was when a figure was moving in front of a halftone background.  It became obvious if half the background was halftone and the other half wasn't; then it looked like there was some pixelation around the character in the halftone space, but it could also have been my TV.

It's not like my TV is the greatest thing ever made, of course.  It's a 23" APEX tube system, weighs a metric farkton, but it only cost $120 new... and really, it's not bad at all.  It overscans like nobody's business, and it has problems with high-contrast CG lettering, like the FBI warning on every DVD, but other than that it's fine.

So, yeah.  I'd say the encode is fine.  What are the AoD people saying?

6 Supposedly the  encodes are like two-thirds to a half of the size of the R2 release, and there was much learned discourse about encoding software standard settings.  Teach me to pay attention to videophile forum whining, I suppose.  Thank you for the feedback.

I'd EXPECT the R2 release to have a higher encode rate, just because of the lesser number of episodes per dvd.  I'll bet it doesn't look all that much better, though, unless you've got a pretty good TV and DVD player.

8 Frankly, I've had that sort of thing happen too.

The Japanese quite often crank up the bit rate when it's not strictly necessary - either going completely CBR (hey, two eps per disc, you've got all the room you want) or just bringing up the minimum VBR encode to something silly. It ain't necessary; modern VBR is pretty good. Not perfect, mind you, but there's no point second-guessing the software most of the time. (On a Hollywood budget, sure, there's stuff you can do. Anime budget, not so much.)

If the show's got a low average bit-rate and lots of room on the disc, well then, it's just not a good encode. Especially early on in anime DVDs, a lot of the contract studios used more or less their "normal" live-action settings when encoding anime, and a 6.0 mb/s average doesn't always cut the mustard. But if I run an encode and it looks good, I'm not going to go re-do it because I've got 10% extra room to chew up... I might lose a day or two if the new encode turns out buggy (or if I overshoot!)