This IS The Future I live in Duckford, IL.  It's quite a bit like any other city in the USA of similar size.  I'm sitting here in Pond Central, creating this post on software administered by someone I consider a friend... who lives in Australia.  I've never met Pixy, maybe never will though stranger things have happened.  Less than 24 hours ago, I received a text message from Brickmuppet, another friend that I've never met... who lives in Virginia.  However, he sent the text message from somewhere in Japan... which looks an awful lot like Michigan, as Steven says.  Steven's another friend I haven't met, who lives in Oregon.  I can only assume his work on cellphones back when such things were new-ish had some influence on the text message I got from Japan.

Which undoubtedly bounced off a satellite somewhere.  Meanwhile, my TV is currently tuned into the 2012 Olympic Games in London, which has athletes from 204 nations and one small group of independent athletes participating, the signal for which is also being bounced off a satellite, perhaps many of them, to arrive here in Pond Central.  As I'm watching that, I'm also recording NASA TV as they prepare to broadcast live coverage of our attempt to put a new rover (named Curiosity) on Mars via a technique that Rube Goldberg would find entertainingly complex.

None of this was really possible 44 years ago.  Heck, 20 years ago most of this would have been a pipe dream.  I didn't even receive my first text until two years ago.  And none of this is particularly exceptional today.  Well, Curiosity is, but we've seen rovers on Mars before.

This IS the future!  We're living in it right now.  Science Fiction has nothing on the wonders we experience and take for granted every day.  I can hardly believe how lucky we are.

UPDATE 1232am 8/6/2012: Curiosity made it down, telemetry confirmed.  Pictures are forthcoming.  Oh my god, that was amazing!

UPDATE 1234am 8/6/2012: A picture has been transmitted from Mars, Curiosity has wheels fully deployed. 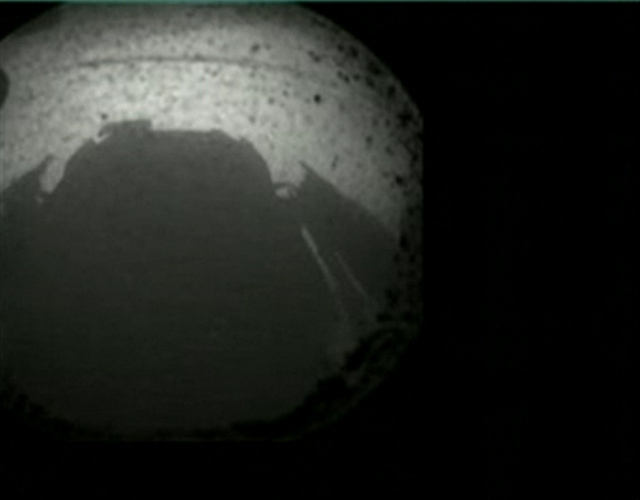 Curiosity's shadow on Mars, sent just a couple of minutes after the landing.  How frickin' cool is that?

UPDATE 1252am 8/12/2012:  The landing data is coming in, and pretty much everything was about as perfect as you could hope.  For example, at touchdown Curiosity was moving laterally at .044 meters/second.  Still no report on how far they missed the planned touchdown spot, but the last information they said was "around 1.5km".  After traveling about 154 million miles, missing the target by a mile or so is... eh, pretty okay, I guess.  Heh.

1 I was in SE Asia on July 20, 1969 when 11 landed. Everyone that could watched in awe. Now I'm home in a comfy chair watching and only a few care. When the spectacular becomes mundane I think we as a civilization lose something.

2 I was following the Curiosity landing on Google Hangout and Twitter while posting simultaneously on a web forum.  Landing on Mars is still a big deal for a lot of people.

3 It's wonderful, living in the future, isn't it? Ten years ago calling my girlfriend in Hawaii for an hour a night would have bankrupted me; now we've got full video practically any time we're both at home for free. I'm following six anime series this season, all of which are being posted online (legally!) the day they air in Japan.

I went on a road trip with only the most minimal preparation - most of our hotel reservations were done while sitting in a MacDonalds of a little town in the middle of nowhere (wifi!) from which we booked hotel rooms across the street at half the posted rate. And as for getting lost, hah! That's something that only happens when your battery runs out, these days.

I write one check a month - to my landlord, whose company obstinately refuses to step into the future. Everything else is tracked electronically. I haven't bought a stamp in... or more like, how much are they, even?

Mind you, it comes with a whole new set of dependencies. Cut my internet connection and I become an extremely unhappy camper, very quickly...

4 We have a photo of a rover landing on Mars, taken by a satellite we placed in orbit some years ago. I love the future.

5 When I was in Austria, I got around the exorbitant fees to call my family by video chatting, much like you said, Avatar_exADV.

To top it off, on Saturday, I was discussing the progress of Curiosity with a friend who tracked it with her iPhone! She also checked when the International Space Station could be visible over our location. (By the way, the ISS is another amazing innovation from humans.)

I, for one, am someone who is still mesmerized by what we can accomplish. I, too, love the future!