The Littlest Aircraft Carriers In the 100 years that navies have taken airplanes to sea, there have been some truly creative methods employed to get an organic aircraft capability onto ships.  Barges towed behind destroyers.  Launching platforms on the turrets of battleships.  Explosive catapults on the bows of merchant ships.  Submarines with floatplanes.  Merchantmen with a rudimentary flight deck laid over their cargo areas.  The list could go on forever, but none of them were really a success.

During the Allied invasion of Sicily, there was a need for artillery spotting airplanes.  The usual plane used, the L-4 Grasshopper (better known in civilian use as the famous Piper Cub), didn't have the range to actually fly to Sicily from Allied bases, and aircraft carriers decks were too valuable to ferry them there.  Having them transported in a knocked-down state was possible, but it was time-consuming to have to put them back together.  Knowing all this, a US Army pilot named Captain Brenton Devol, suggested a solution: put a flight deck on a LST.  And lo, was the tiniest aircraft carrier created.

LST-386 was fitted with a flight deck made of timber and pierced metal runway mats.  It measured 216 feet long by 12 feet wide, and it took just over 36 hours to build.  It could carry four Grasshoppers, plus its normal load of cargo and troops in her tank deck. 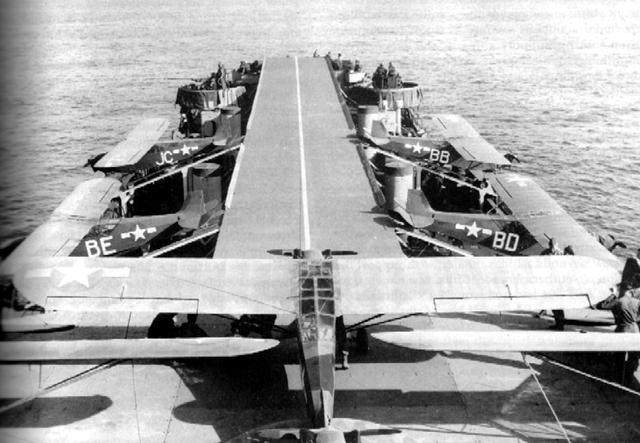 The conversion was so successful that five or six other LSTs were fitted with their own flight decks.  As time went on, the design was refined to allow nine Grasshoppers to be carried.  Four of them, shown above, were carried on minuscule ramps, while the other five were on a platform just ahead of the bridge.  The LST would go as fast as she could into the wind, usually winding up with a 20kt breeze to aid the L-4s into the air.  The lightweight plane would fairly skip into the sky with that amount of help.  Accidents were not unheard of, but all in all the LSTCV was a successful and useful design. 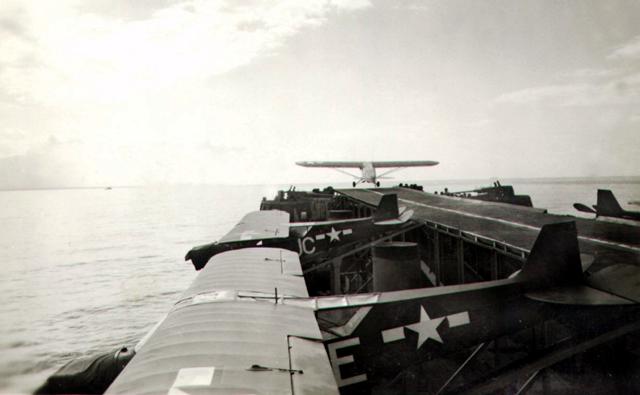 However, these LST conversions could not be considered true aircraft carriers.  There was no provision for recovering the L-4s after launch; the planes would have to land behind friendly lines after takeoff.  Considering the short-field capabilities of the Piper Cub, one could imagine a scenario where the LST would steam backwards while a white-knuckled pilot tried to land on the narrow pitching deck.  It could work, but it seems unlikely.

But out in the Pacific theatre, something different was invented... something that was allowed a LST to become a true aircraft carrier.  This something was called the Brodie Device.


Generally, the use of LSTs as plane carriers wasn't necessary in the Pacific theater, since there was a huge amount of CVEs available for the job.  Throw in the fact that a CVE could easily ferry 50 or more L-4s at a time and it seemed pointless... until one realized that there often weren't safe places for an artillery-spotting airplane to land on many of the islands being fought over.  One could easily imagine landing a Piper Cub on a real aircraft carrier, even a CVE, but for some reason this wasn't done.  Floatplanes could do the job, but they were Navy, and an Army man would rather speak to another Army man; they "spoke the same language," as it were.  Thus was a need for a recovery system found. 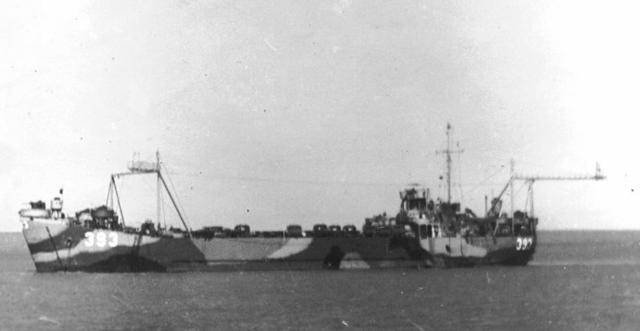 The solution to this need was called the Brodie Device.  A cable was suspended between two outriggers mounted to the side of a LST.  Dangling from the setup was a harness with a loop that could slide down the cable.  Simple as that. 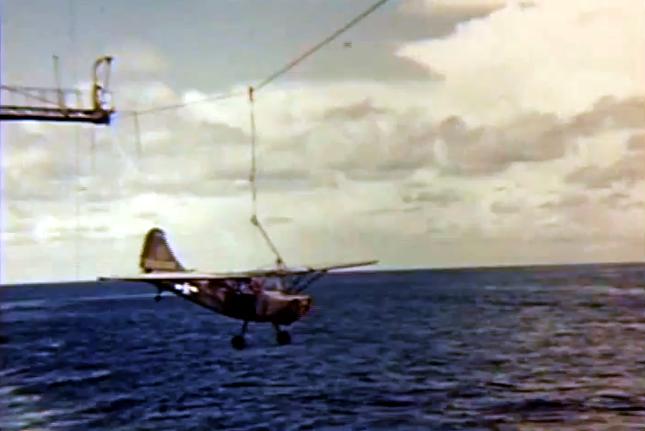 Two LSTs were converted to the use the Brodie Device, 393 and 776.  Each could operate three (maybe four) L-4 Grasshoppers, becoming in effect, the true smallest aircraft carriers.  Unsurprisingly, they were phased out almost immediately after the war, a footnote in the grand history of the aircraft carrier.

1 I don't know how i first found your internet site but you fucking rock, i love  reading these stories, any time you want to come to Normandy give a shout i live there

2 There was an amazing amount of improvisation done by people near the front who had problems to solve. There was the way that the B-25 Mitchell was converted from a high level bomber to a tree-top strafer by "Pappy Gunn" in Australia, for use in New Guinea. That one was so successful that engineers from North American Aviation made the perilous trip to Australia to look at the modified units, and then went back to the US and started building strafer versions in the factory.

There were also "Hobart's Funnies".

This trick with the LST is right in character, and I really believe that it worked well. But the first pilot to try to land with that Brodie device has to been certifiable...

3 I remembered another case of field modification: the steel teeth that got welded to the fronts of tanks in Normandy to deal with the hedge-rows.

4 The LST proved to be a very modifiable design.  Other than the LSTCV, some modifications I can think of off the top of my head include the Hospital version, rocket barrage ships, and anti-aircraft LST that was used off of Okinawa to supplement the radar picket destroyers.  If someone told me they made a version that carried nothing but ice-cream makers, I'd believe it.

Funny you should mention the B-25... I was just reading a book that had a big section on it.  The Strafer Mitchells had one shortcoming that they never entirely managed to fix in the field.  The extra weight from the nose machineguns screwed up the plane's center of gravity, so they never quite flew right.  It was easy for the pilot to compensate, but the plane wasn't the same.  The "official" Strafers fixed that.

5 Proud to say that Brenton A Devol is my grandfather and he is the most STUDLY human being I have ever had the good fortune of gracing my presence with.  Smart, quick witted, innovative (obviously from this article) and a true gentleman.
Thanks for this site!   Freaken awesome as I look for more info. on him on this Veterans Day (here in the US).