The Adventures Of Tintin Before last year, if you said the word "Tintin" to someone here in the US, it was most likely that you'd get a blank look in reply.  To be sure, there were a few who knew of the stories of the boy journalist, but they're more a European thing.  I was one of the lucky ones.  I was introduced to the Tintin books at the age of three or four, and I taught myself how to read to them.  Just a few steps away from my computer, there are some 16 of the books, terribly worn but well-loved.  Most are the Little-Brown translations, but there are a few of the first Methuen ones mixed in.  It's no exaggeration to say that I owe much of what I am to that small collection of "graphic novels," along with Monty Python's Flying Circus and the works of Robert Heinlein. 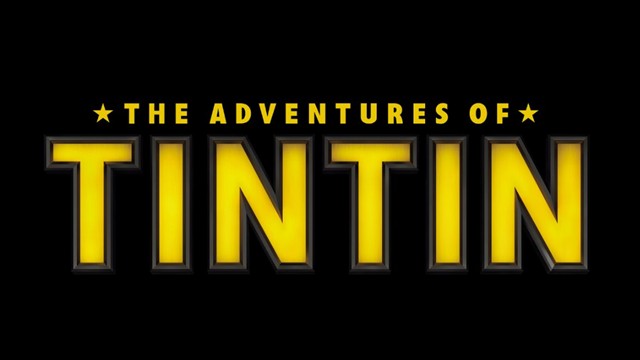 Some four years ago, some reports began to leak out of Hollywoodland of a major motion picture treatment of Tintin.  It was to be live action, then it turned into a traditional animation project, until it was announced that WETA Digital had been tabbed to do an all-motion-capture movie instead.  To be honest, I had incredibly mixed feelings about all of it.  On one hand, I've literally waited all my life for a good Tintin motion picture.  On the other hand, I've waited all my life for a Tintin motion picture, and I was afraid that whomever took it on would royally screw it up.  Even reports that Stephen Spielberg was directing did nothing to assuage my trepidation.  Indeed, my fears grew as more and more information came out: it was to be based on the two-book story, The Secret of the Unicorn/Red Rackham's Treasure... which happens to be my second-favorite of the Tintin stories (Destination Moon/Explorers on the Moon have the honor of being my favorite).  There are also elements of The Crab with the Golden Claws mixed in as well.  When the movie was released in December 2011, I discovered that I couldn't bring myself to go see it.  Part of it was that I hate going to the movie theater, what with the talking and the cellphones and so on.  The other part was simple fear.  I knew I'd see it eventually, but I wanted to do it on my terms... and that meant when the DVD came out.  Which it did a couple of months ago.  Last week, I purchased it.  So what did I think? 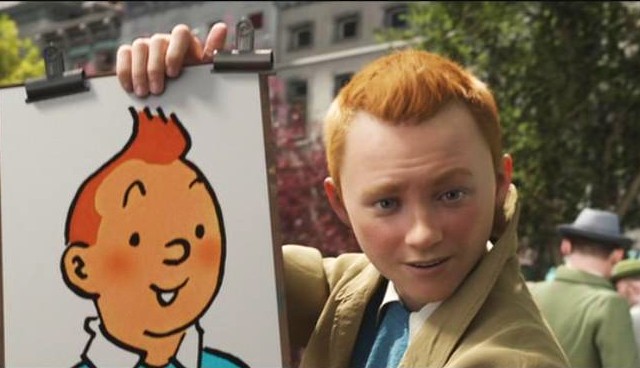 I need not have worried.  It's a very, very good representation of Herge's work.  In the extras, Spielberg says that when Raiders of the Lost Ark was released in France, it was described as a Tintin adventure, and he worked hard to bring that same sort of excitement to this film.  For those who have never heard of Tintin before, it'd be a fun action romp filled with interesting characters.

For those of us who know the stories, Spielberg took the time to throw in a ton of references while staying mostly true to the original work.  There are bottles of Loch Lomond whiskey rolling around, for example. 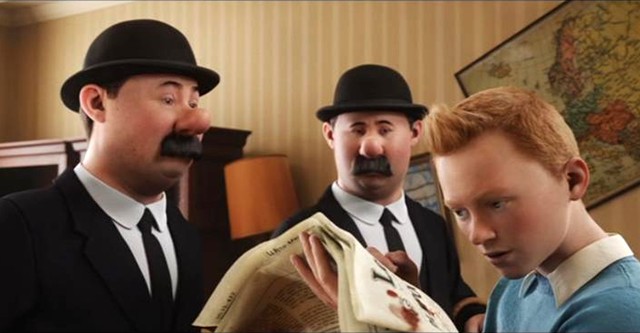 Sadly, the biggest weakness of the film is the one thing that made it possible: the motion capture technology.  It's gotten good enough that we're in "uncanny valley" territory.  For the most part, the look works, but there are moments, such as the motorcycle chase late in the film, where it just looks wrong.  Thompson and Thomson, the not-twin detectives, are disappointing as well.  While they look very much like their comic-book counterparts, they have a goofy semi-realistic style that doesn't fit with the rest of their mo-cap world.  I don't know that there's anything that could be done about that short of removing them from the story, but there you are.

It's an odd fact that the one character that isn't motion-captured is the most expressive of the cast.  Snowy, Tintin's dog/partner, is 100% animated, yet fits perfectly in the world.  In the original stories, we read his thoughts via word balloons.  In the movie he's not allowed to speak, but you always know what's going on in his mind.  Snowy is a virtuoso performance by WETA, and it really makes the movie work.  If you're a Tintin fan, you owe it to yourself to see The Adventures of Tintin.  If you're not, but you're looking for a good two hour action-filled romp that doesn't require a whole ton of thought and is kid-safe to boot, it's a good film for you.  There is some violence, particularly during the pirate sequence, but no blood or inappropriate language.

I really enjoyed the movie... more importantly, the five-year old me that learned to read with Tintin is satisfied.

1 Saw it in the theater (but not in 3D), and it was very impressive.  Mind-blowing was the reveal-shot of Morocco.

I thought they did a great job of translating Tintin to CGI without making him too implausible, but you're right, the rest of the characters are such broad caricatures in the comics that translating them to "realistic" CGI characters makes them implausible, and owners of prime real-estate in Uncanny Valley.

It's odd for me that I've SEEN a lot of Tintin books, but I've never read any through.  I think most of them I saw in high school in a French friend's collection - Along with some original Smurfs books (before the American cartoon) and a fat stack of issues of Spirou.

2 Now I'm waiting for someone to do a movie based on the Asterix comics.

I'm glad the CGI wasn't a total disaster, but IMHO Spielberg should have done Tintin in traditional animation.  I'm sure good animators could have kept the character design and the art style of the comic books.  (FWIW, there is made-for-TV animation of Tintin out there, which stays true to the books in that regard.)

"There is some violence, particularly during the pirate sequence, but no blood or inappropriate language."

There are some things in the Tintin comic books that are remarkably "mature" (for lack of a better word); Captain Haddock's drinking habit, for example, or the fact that Tintin knows how to handle firearms.  I was wondering how well those things would go over in an animated movie (which, in North America anyway, would still be primarily aimed at young children).

3 Peter, I actually just purchased the 1991 TV series (by Nelvana, the perpetrators of "Cardcaptors", god help us) last week.  I've never seen it, because until just recently it's only been available in Region 2.  I almost cried when I discovered that it'd finally been released in R1.

4 Yeah, the drinking and gunplay surprised me as well.  They'd have never appeared in a purely American production, and I'm surprised they weren't taken out, maybe replaced with walkie-talkees....