That'll Buff Right Out, You Betcha. November 29, 1968 was shaping up to be just another day for Santa Fe 213L, an EMD F7A in freight service on the Plainview District main line in north Texas. 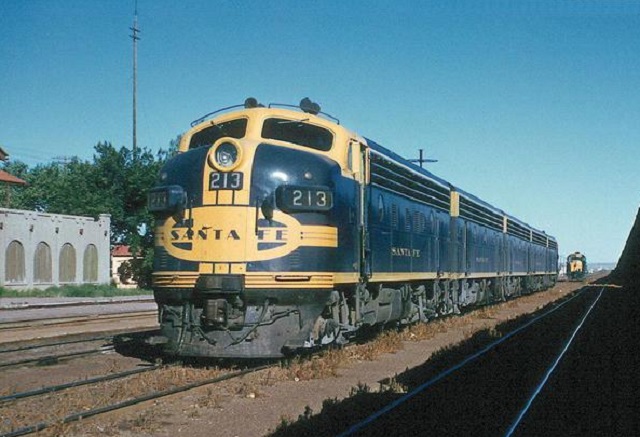 Hook up and run through Hale Center, taking its load of cars to wherever they needed to go.  Shame about the tornado that tore through the center of town a few years earlier, though.  Never was a big place, and some folks decided they didn't want to come back afterwards... Lubbock to the south, Amarillo to the north, plenty of big city reasons to move in either one.  'Sfunny how things change.  Even that US 87, runs parallel to the main line, it's gettin' replaced by something called I-27.  Saw it gettin' built as we ran back and forth over the years.  Dunno if it's better, but it's new... train'll still carry more stuff than trucks will, more than likely.  Although that may not be true for long... lotta guys retirin' early, or just being let go, and who ever thought that'd happen?

Huh.  Could swear that looks like a train out there, just south of Hale.  Hm...


In fact, it was another train, Santa Fe freight engine 270C, coming the other way.  While everybody did their level best to prevent a collision, the two engines hit at an estimated 40mph. 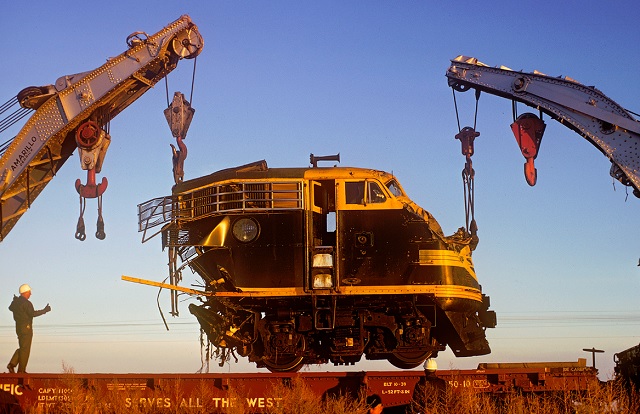 213L split right behind the cab, exactly as designed.  Keeps the prime movers from crushing the crew, sort of like a car's crumple zone.  Looks dramatic as all heck, though. 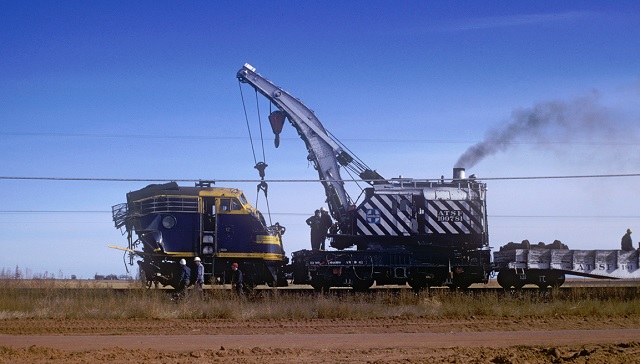 While both engines involved were scrapped, there were only two minor injuries.  Probably happened when the crews bailed out, if they did.  I'd assume they did... 20mph is kinda fast to jump from a train to the dry Texas dirt, but what was about to happen would probably make it look like an attractive proposition.  Sadly, I couldn't find any pictures of 270C... I'm going to assume it turned into confetti after the collision.

But how about that picture of 213L being lifted?  Man, that's pretty.  I mean, other than the wrecked cab portion that is, but the color and composition is great.  Golden Hour, indeed

1 Ha! Dad grew up in Lockney, just a quick hop east of there. Hardly any town left now. Wasn't much of one to start, for that matter. I'd say that he would probably remember the wreck, but he may have been in Germany. I'll ask him, anyway, he'll get a kick out of the photos.

2 I'm not sure the track is even there, anymore.  The line along 87 used to terminate south of Lubbock in Lamesa, but at least the stretch between those towns was taken up about 15 years ago.

3 Alas, that was about a year after he moved to Houston. Hadn't heard of the wreck. "News didn't move as fast back in those days, son." Can't deny that.

But how'd YOU find it?

4 I hang out in the seedy back alleys of railfandom.

6 Just be careful. Going to railpictures.net is like going to tvtropes.com.

aka "the seedy back alleys of railfandom."

8 I was born in Plainview and dad moved us to Lubbock in '65.
We moved to New Deal in mid 70's.  That track ran about 2 miles west of the homestead.  I could hear the horns on a calm night.  I have about 30 bucks worth of squished pennies around here somewhere from that grade crossing!
I love the look of those riveted cranes, too.  WOW!