Staying Calm As you, the intelligent, erudite, well-spoken and cultured reader of The Pond, are aware, I had a small portion of my skeletal system yanked out of my head yesterday.  With the appointment at three in the afternoon, I had plenty of time to become jittery as is my wont.

So in an attempt to sooth my fears, I decided to take some photos of Wanderduck, the rubber duckie that goes to interesting places with me, and is, in fact, the duck that appeared in the post just previous to this one.

Alas, it turned out that my nerves ruined both my sense of composition and my muscle control, for only one picture turned out to be good AND not blurred. 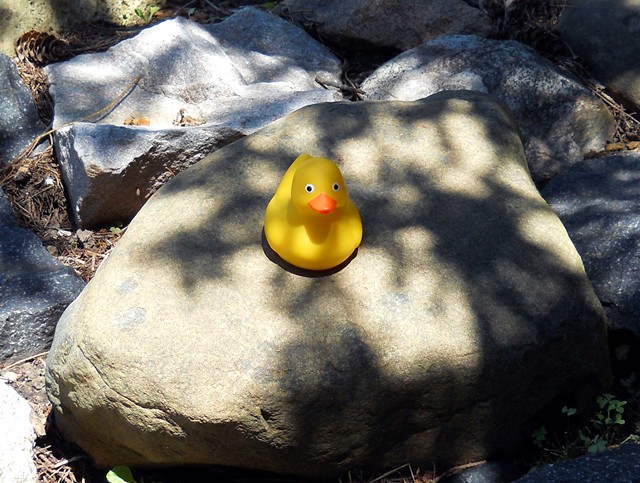 I'm not sure how or when Wanderduck joined the flock; certainly he's been around for quite some time.  He went with me when I had a tooth removed back in March of 2008, he made the trip to New Mexico (though I fear those pictures are lost), visited Courtesy Aircraft, so on and so forth.  It's only been just recently that I've begun calling him Wanderduck, though.

Anyway, this post is about all that I have the mental energy for today.  Sooner or later, there will be actual content here.

3 Look at this evil duck (has a spoiler for Sekirei, which was widely known though):
http://tenka.seiha.org/images2/sekirei7/sekirei7_82.jpg

4 To celebrate both your dental-survival and the licensing of Ga-Rei Zero, perhaps Wanderduck should visit the local grocer to purchase some Pocky sticks...