Seventeen Years Ago It was a Tuesday morning at Pond Central.  Tuesdays meant New Release Day at the bookstore I ran at the time, which required resetting the new Top 20 display at the front of the store.  I woke up about a half-hour earlier than I normally did, intending to get to the store early.  Nothing too out of the ordinary there, truth be told.
That all changed when my clock radio turned on.  Instead of hearing the usual light-hearted sports talk, I realized that the morning duo sounded... serious.  I mean, really serious.  Something about one of the World Trade Center buildings having been hit by an airplane.  Honestly, my first reaction was one of total unconcern; as a World War II buff, of course I knew about the B-25 Mitchell flying into the Empire State Building in a thick fog.  Of course I thought that it would be something similar.  I headed out to Pond Central's kitchen, grabbed some orange juice, then turned on the TV to see what was going on. 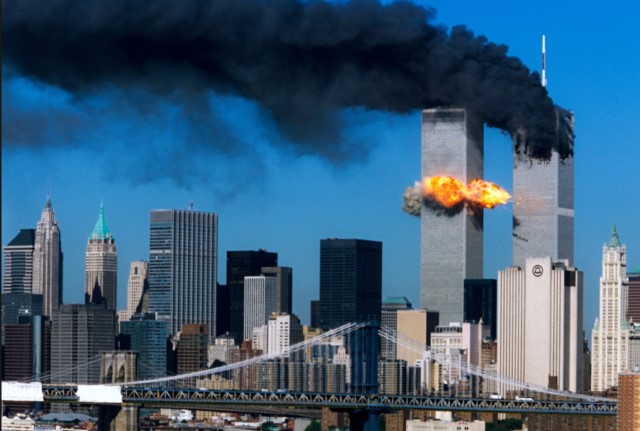 I had had just enough time to say to myself "that's a really big hole, and a lot of smoke.  It sure wasn't a light airplane."  I also noted that the sky was clear and blue, so it couldn't be that the pilot had gotten lost in the fog like the B-25 had.  But before I could really boil all that down to the obvious conclusion, the second plane hit.  In my rush to get up close to my 13" TV/VCR combo, I spilled my orange juice and barked my shins on the coffee table.  I stood there for 10 or 15 minutes, before heading for the shower.  Listened to the shower radio the whole time, got dressed, then watched the TV until I absolutely had to leave.  At the time, I literally had to drive from one end of Duckford to the other, at least a half-hour long jaunt.
As I was driving, the South Tower collapsed, and I very nearly bent the Duckmobile's steering wheel in shock and surprise.  I drove the rest of the way in thinking to myself, "there's a sister bookstore in the mall underneath the WTC."  It was kind of a weird feeling, knowing that some people that you've got a very very weak tie to have probably just died... people just like you, probably got in early to set the new Top 20 display, and they just had one of the tallest buildings in the world fall on their heads.
(I'm going to interrupt my story to let you all know that no employees of that bookstore were killed, or even injured, that day.  The rest of the chain didn't find that out for a couple of days, however.  I can only imagine how the manager's phone call to their District Manager went...)
With that image in my head I pulled into my mall's parking lot, and practically sprinted into the building, so best to pull the boom box out of the back room and bring it to the cashwrap so to keep listening to the events of the day... and discovered once again that fluorescent lights scream like banshees in all sorts of radio frequencies.  I managed to find a station that wasn't drowned out by static, waaaaaay up at the top of the dial.  I think it was broadcasting from Wisconsin, but I don't remember for sure anymore.  And sometime between leaving my car and tuning in WCHZ, the North Tower had collapsed.  Not knowing what else to do, I started resetting the Top 20.
At 10am, I opened the gates to let the flood of customers into the store... and by "flood", I mean "nobody."  Exact times get a little hazy around this point.  I did have one customer come in, we talked for a bit, and then she left.  She almost looked dazed, and to be honest, I probably did too.  My DM called, said that half of the stores in our district were having to close because their malls were shutting down early.  I hadn't heard anything yet from my mall's manager, but I'd let her know as soon as I did.  I suspected it wouldn't be long: other than dazed woman, I couldn't see a single customer anywhere in the mall.
Then stores began closing up on their own.  The guy who ran the tuxedo place directly across from me said that his boss had called and said "I don't care what the mall is doing, get out of there."  If you weren't working in a mall or a big building at the time, you might not remember the fear that permeated that day.  There was a lot of concern that more attacks might occur.  I know that they evacuated both the Sears Tower and the John Hancock Building in Chicago because of a report of another hijacked plane.  Why would terrorists attack a small, dying mall in upstate Illinois?  Doesn't matter... there was a lot of irrational thought occurring just then.  Eventually, the Powers That Be at the mall said "shut it down," so after calling my staff to tell 'em not to come in, I did just that.
On the way home, I stopped at a grocery store.  Looking back at it, that was a weird decision for me to make, but what the hell, I needed my frozen pizza.  Unsurprisingly, there was no wait for a cashier.  Once I got home and got my foodstuffs put away, I turned the TV back on and took up residence on my couch for the rest of the day and a good portion of the night. A little while ago, I mentioned this to a coworker.  He asked me why I didn't get on the internet to follow events that day.  Did I mention that he is a very young coworker?
That was... quite the day.  Quite the day indeed.

1 I've probably told the story before, but: We usually woke up to the "adult contemporary" radio station's morning playlist, so basically the soft-rock option (it's what the missus-at-the-time and I could agree on). When the radio kicked on at its usual time and all we heard was news commentary, we realized something was up. It took a couple of minutes to figure out what was going on.
Basically none of my family was left in NYC by that point and I had no Internet friends there either, so it was a more generalized horror for me. And then we got news that Grandma Hjordis died that morning. (Of natural causes. In Kingsville TX.) So it was weird to be at work (at a radio station) dealing with... all of that. I looked terrible enough to get a lot of "Did you lose someone?" and having to go, "Well, yes but not for the reason you think."

2 "The rest of the chain didn't find that out for a couple of days, however."
The place I was working at the time had an office in WTC7, and we had the same issue (like you, nobody in our office was hurt).  Communication out of NYC was pretty fragmentary for a couple of days.
My mother-in-law was driving from Maine to Florida that day, though, and we didn't hear from her for hours.  She'd been through NYC well before the planes hit.

3 I was at my ATC facility (Denver ARTCC) that morning, out on break in the cafeteria. The "Today Show" was on the TV behind me. They cut to their New York correspondent, who said that it appeared a bomb had gone off at the WTC. I turned around and looked, and realized what everyone else already had. Big plane. We all went back to the control room, where it was already news. We put 258 aircraft on the ground in about 23 minutes. Then, for several days, there were nothing but military aircraft in the sky. (Well, I did have one pilot who chose to go it alone on day 2, but he got caught... that's another story).

4 I turned on the TV for some odd reason that morning. Not a normal routine. Saw the plane hit the second building. Left for work following the events on the way by listening to WLS where Roma was doing her best to calm Don down because he was losing it on air. Got to work where co-workers had no clue what was going on. Was unable to keep it together enough to explain what had happened. Had to do storytime that day. Drove home that night on 20 flanked by flags.

5 I was at home at the time. It was around the start of my long period out of work, and I was building my BattleBot down in the shop, when my neighbor Robin came by and said "Did you hear? A plane hit the World Trade Center," and I was glued to the TV for the rest of the day. Like everyone, at first I thought it was an accident, until I saw the second plane hit, and I got that icewater feeling in my gut, knowing that something was going seriously wrong.