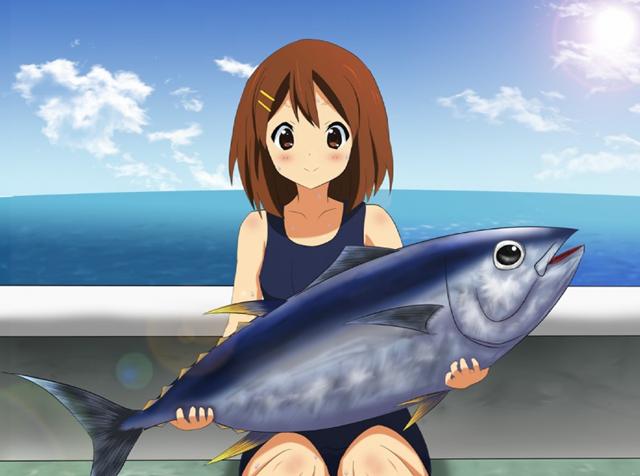 No, not "Saturday Night Tuna," tunage!  I haven't done a good music post in a while, and since I don't want to work on the two long anime posts I've got on my mind, this would be a good time!

It's criminal that this band disappeared after three outstanding albums that garnered little attention after 1988's Vivid.  I suspect that the record labels thought of them as a novelty act... "Look, blacks can rock too!"... as opposed to what they were: a jazz-infused hard rock band that yielded nothing to nobody.  I know I've posted this one before, but I don't care.

If you've watched any television in the past two months, you've seen the thirty second version of this.  Having said that, the tune is great, the lead singer has a very distinct sound, and it's a fun video.  Guess it did its job then.
Stand By - Roman Holliday

A few Saturdays ago, I was doing something here at Pond Central, I don't remember what, while listening to SiriusXM's First Wave channel, playing "80s Alternative" music (i.e., what I grew up listening to).  On Saturday nights though, they have their Saturday Night Safety Dance ("Just like your favorite dance club in the '80s!") and break out some of the really good stuff.  When this one came on, my jaw hit the floor... then I proceeded to sing along like I'd heard it only yesterday.  In truth, it'd been roughly 25 years.  Never really made it big did Roman Holliday (sic), but got some spillover from the popularity of the Stray Cats.  I don't understand exactly why they're both considered rockabilly, but there you go.

When I first heard this over at BigN's place, I was amused.  Now that I've listened to it more than a few times, it's gone past amusement all the way to amazement.  It's a brilliant mashup of two styles that couldn't be more different... and the creator made it work!  Same guy also did an interesting mashup of The Clash's Rock The Casbah and a song from the Bakemonogatari soundtrack that's pretty good, too.

Probably the tune that's got the heaviest rotation on my playlists right now.  Any song that uses chimes (aka "tubular bells") is okay in my book!  Of course it's the ED from Mahou Shoujo Madoka Magica, the best anime of the year so far, but I'd love this track standalone.

Let's see how many different "like" buttons this song presses for Wonderduck:
1) strong bass line?  Check.
2) use of uncommon instrument (in this case, an organ)?  Check.
3) Jangly guitar?  Check.
Just a catchy track that I like listening to, is that so bad?
...and that leads me to a song I haven't listened to since grad school:

This is off the CD "Strange Days", which was, I think, the second or third CD I ever purchased.  It was a mistake, I thought I was buying something by the Charlatans UK (see previous entry).  The rest of the CD is okay, but there's something about this track that just blows my mind even now.  I don't think I could define what that something is if you held a gun to my head, but there you go.

If you know the original song by New Order, you're probably having to pick yourself up off the floor right about now.  I was working in the music department at Duckford's Best Buy when Frente!'s first EP was released to an overwhelming "meh", despite being listed #1 on the new release board.  I bought it because I practically felt sorry for the darn thing, just sitting there unloved and all.  If you're into wispy-voiced female singers, you'll like this.

Somewhere, someone is being driven to kill me for posting this.  I don't care if it seems like a weird combination, I love this version of the classic rap song.  Besides, it gives me a reason to post this:

Finally, I'm putting this here so I don't ever lose it:

Politicians In My Eyes - Death

Pretty good punk tune, right?  This came out in 1975, but the band first started up in 1971.  Think about that for a second... this is punk before punk itself was punk.  And it's awesome!  Then you realize that the band consists of three african-american brothers, and that "black punk" is about as rare as hen's teeth, and you get an idea about just how important these guys could have been, if only anybody listened to punk in 1975...

You know you've been reading anime blogs too long when you see that headline and try to figure out why you don't know what "too-nah-geh" is.