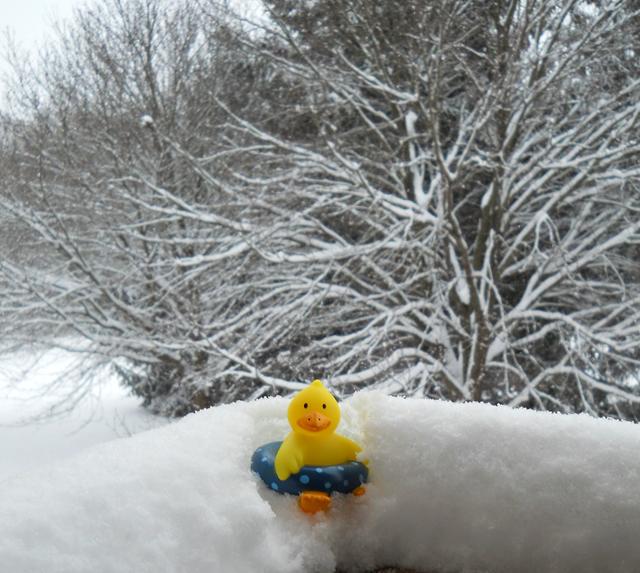 In contrast to the dusting we had a couple days ago, last night Duckford was hit by a real snowfall.  No totals yet, but the predictions were for 4"-8".  My guess is that we probably had five inches, at least around Pond Central.  It's not a wet, heavy snow, which is nice.  Slippery, though.  Last night around 1130pm, I was returning from a pleasant evening of conversation with Dr John, who is the father of reader-and-occasional-commenter Vaucaunson's Duck.  At one point I was stuck behind an idiot who didn't know how to climb a slightly steep grade in a rear-wheel drive car... at least, I was stuck behind him until he fishtailed himself into a curb.  *shakes head*  Right up until he clonked the curb his rear tires were a blur.  Obviously the driver was a believer in the Jeremy Clarkson method: "MORE POWER!!!"  Idiot.

1 OMGosh! Snow already! That means it's not too long before it arrives over here on the east coast. Brrrrrr. That duck is gonna need a scarf or something so it doesn't catch a cold or the bird flu

One night--back when I lived in Cedar Rapids--we'd had an ice storm and everything was coated with ice, including the roads.  I was watching TV, but kept hearing this weird noise from outside; it went on and on for several minutes, and finally it annoyed me enough to go see what the hell it was.

Some guy, out in the street, was trying to get his RWD car (I think it was a mid-80s Buick Regal) moving on the ice, and he seemed to think that if he stood  on the gas and spun the tire (open differential FTL) as fast as possible, that would get him moving.

You'd think that after a few minutes of this the guy would twig to the notion that this isn't going to work and might try something else; but no, it went on like this for quite a while.

The sound eventually went away.  I don't know if the guy grenaded his drivetrain or what.