Pitchers & Catchers Report Next Week For all of you that find that headline exciting and fascinating, here's something else for you: 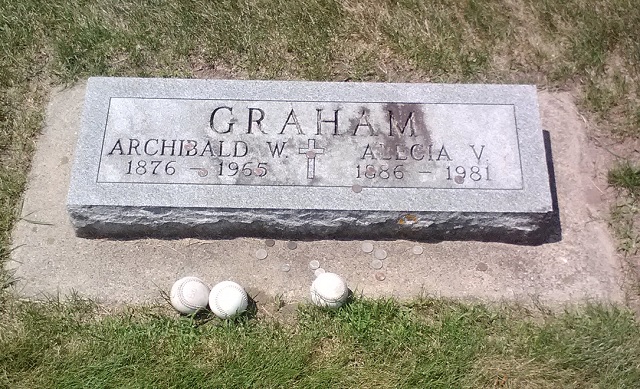 For the rest, enjoy where your life may take you, rejoice in what you've accomplished, but do not miss what you could have had.  Mr Graham would tell you the same.

2 Alas, no.  I was not aware of Mr Graham when I lived in Minnesota, when finding this would have been easy.

I like the idea that someone left baseballs there, and like even more that they lasted long enough to weather.

But why are there coins?

4 Apparently in some US cultures, it's traditional for living military veterans to leave coins on the graves of dead military veterans. It might be the same with baseball people. There's also a more elaborate "code" that some US military use:

"Leaving a penny means you visited. A nickel means that you and the deceased soldier trained at boot camp together. If you served with the soldier, you leave a dime. A quarter is very significant because it means that you were there when that soldier was killed.

"So what happens to the coins after Memorial Day? It is collected and the money is used for cemetery maintenance, the cost of burial for soldiers, or the care for indigent soldiers."

I suspect that this more elaborate code is not in force for this grave.


Probably the coin custom is ultimately derived from the general Jewish/Irish/Indo-European custom of leaving small stones on graves, as a token that won't blow away or get lost.