Pacific War Pics I had to work late tonight, but when I got home there was a present of sorts in my e-mail box.  The latest edition of the Battle Of Midway Roundtable had come out, and contained therein was a link to a Denver Post blog.  "So what," I hear you asking.  Well, that particular blogpost has 110 pictures from the Pacific War, starting at Pearl Harbor and finishing at Tokyo Bay.  And they aren't all the usual pics, either.  For example, I give you this: 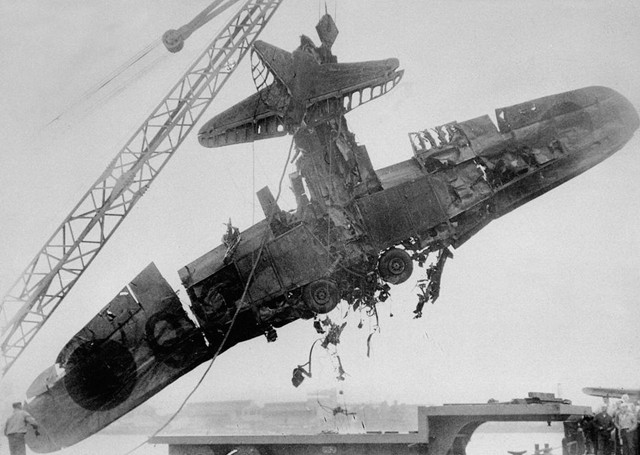 That's the wreckage of a Japanese B5N ("Kate") being fished out of Pearl Harbor shortly after Dec 7th.  Or this: 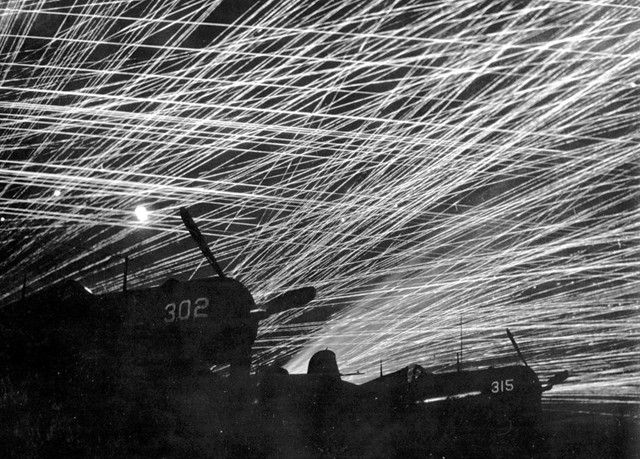 That's flak over Yontan Airfield, Okinawa, sometime in March of 1945.  Lots more where these came from, so go take a look.  It's unsafe for dial-up users, though, as all 110 pics are inline to the post, not thumbnailed or linked.

1 Most cool.  thanks for the link.

2 Picture #14: what kind of tank is that? My first reaction, without looking anything up, is that it's a Stuart, but maybe a Grant?

3 #92: That sight is one I can never really comprehend. I understand intellectually what it means, but deep down I cannot really understand it. There are too many of them.

5 Aigh!  #52, there looks to be a pinless grenade sitting in the sand by the troops as they rush past.  Wonder if it's just a bad angle, or if it was a dud or something?

6 Mitch, I think the handle is down and behind, buried in the sand. But it's not impossible that it was  a dud.

7 Mitch's reaction was much the same as mine when I first saw it.  That grenade sitting there also makes me think that picture was staged, otherwise there wouldn't be anybody in the frame... they'd all be heading for the hills or huddling behind the landing craft, waiting for the fragments to stop bouncing.